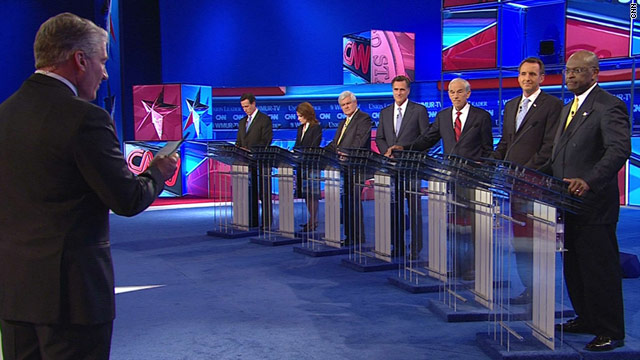 Editor's note: CNN Opinion asked contributor John Avlon to score Monday's Republican debate in New Hampshire. Avlon is a senior political columnist for The Daily Beast. He is the author of "Wingnuts: How the Lunatic Fringe Is Hijacking America."

(CNN) -- Strongest lines: No one sound bite dominated the debate, but two gimmicks stuck -- Mitt Romney announcing the Bruins' lead in Game 6 of the Stanley Cup to great applause and Michele Bachmann announcing her candidacy for president on the set.

Weakest lines: Tie: Tim Pawlenty's running away from his criticism of "Obamneycare" and Romney struggling to explain whether the troops should come home from Afghanistan.

Dumbest lines: Herman Cain struggling to explain his job interview criteria for Muslims. And Bachmann's epic closing pander about how she learned about the goodness of the American people during the last two hours.

Biggest winner: Romney, if only because the other candidates seemed strikingly reluctant to take him on directly. He seemed the most presidential on the dais and that's what its all about.

Biggest loser: Gingrich -- He had nothing to lose coming into this debate and therefore should have been swinging for the fences. Instead, he was a mild-mannered version of himself, complete with a yellow tie. His ideas added to the debate but he did not change the narrative after essentially being fired by his entire senior campaign staff last week.

Best performance by an underdog: Bachmann -- benefited from low expectations and cleared them easily. She will be a factor in this campaign, boosted by a highly paid staff of professionals.

Who gained ground: Romney because he survived the first debate as front-runner without taking any direct shots -- his mistakes were mostly self-inflicted. Bachmann gained ground to the extent that she established herself as a force on the 2012 debate stage.

Who lost ground: Herman Cain came into the debate largely unknown but with a great deal of momentum because of his supporters' uncommon enthusiasm. He's probably the best natural communicator in the bunch, but he did not shine in this debate and at times stumbled badly.

Grading the seven candidates (A through F)