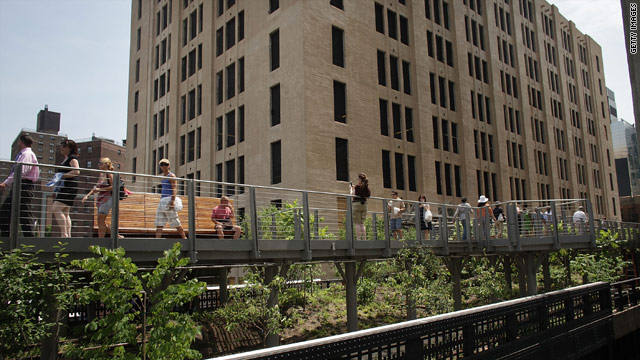 Editor's note: Nicolaus Mills is a professor of American Studies at Sarah Lawrence College. His most recent book is "Winning the Peace: The Marshall Plan and America's Coming of Age as a Superpower."

New York (CNN) -- This week the second section of New York's iconic High Line park opened with almost as much fanfare as the first section got when it opened in June 2009 and drew 2 million visitors in its first 10 months.

What makes the High Line so unique as an urban park is that it rises 30 feet above the street on a 1930s elevated freight line that was slated for destruction after the last train ran on it in 1980. Only the action of neighborhood community groups, committed to preservation of what they regarded as a local landmark, saved the High Line.

High Line concepts are being considered for other cities across the country. And well they should. For the message the High Line sends is: Treat your urban ruins carefully. They may be more valuable than you think.

The difficulty with trying to apply the High Line concept to other cities, as the architectural historian Witold Rybczynski recently observed, is that few cities have New York's density. The High Line could not, for example, work in an old, industrial area people avoid, or in a neighborhood in which it towered over one- and two-story homes. 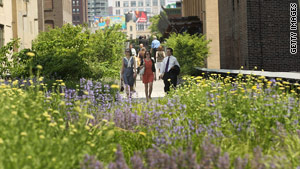 In New York, where offices and apartment houses surround the High Line, its designers have not had to worry about drawing enough visitors or towering over a neighborhood. The new second section adds another half mile to the now mile-long High Line, which runs parallel to the Hudson River along New York's West Side from Gansevoort Street to 30th.

The message the High Line sends is: Treat your urban ruins carefully. They may be more valuable than you think.
--Nicolaus Mills
RELATED TOPICS

"The High Line," he insists, "is not intended to offer a romantic view of nature so much as a post-industrial view." What Corner means is that the nature visitors find in High Line Park reflects what happens when an industrial site is abandoned and weeds and wildflowers start growing in it. The trick of turning such a site into a park, Corner believes, lies in recreating a post-industrial look while making sure visitors have space they can comfortably walk in.

The flowers in the second section of the High Line reflect this post-industrial aesthetic. The black-eyed Susans, purple echinacea and yarrow that a visitor sees everywhere have a subdued look that would make them seem like poor cousins in a suburban garden, but on the High Line these flowers fit in with the concrete walkways and old railroad tracks they grow beside.

What the High Line's designers have done to prevent the park's modesty from turning into monotony is choreograph its second leg so that it changes every few blocks. The second section opens with a thicket of trees and plants, then changes to a lawn designed for sunbathing and picnics, before an elevated catwalk, known as the flyover, appears.

In time the bigleaf magnolia trees, which are planted just below the flyover, will provide a canopy of shade that Corner estimates will reach 20 to 25 feet in height, but for the moment the flyover is unprotected from the sun, as is the wildflower field that comes after it.

For visitors, this lack of shade is not a distraction. The changes in the second section of the park come rapidly, and they culminate in the 30th Street cutout at the park's exit. There the ironwork holding up the High Line is deliberately exposed, as if to remind the visitor how much effort went into creating the park in the first place.

It is hard to complain about a park in which so much care has been invested, and as if all this planning were not enough, the park's designers have made sure the long, curved teak bench that runs from 29th to 30th streets was built from recycled teak so as not to be a strain on the environment.

None of this planning has come cheap. New York has invested $115 million in the High Line. The city's justification for spending so much in a time of budget cutting is that it expects even more money back in taxes, and so far that calculation has proved a good one. The High Line is being credited with producing an estimated $2 billion in private investment in the surrounding West Chelsea area, plus 8,000 construction jobs..

In my opening-day visit to the High Line, my only doubts came from looking at an ingenious, site-specific installation by Sarah Sze that sits in the park between 20th and 21st Streets. Titled "Still Life with Landscape (Model for a Habitat)," the installation is a combination of stainless steel and wood that is designed to provide shelter, food and water for birds, butterflies and insects drawn to the park.

There was fresh seed in the bird feeders on opening day, but the feeders, like Sze's birdhouses, are so close to the walk that bisects her installation that it is hard to imagine any bird -- save a blue jay on steroids -- having the nerve to grab a quick bite, let alone build a nest in a place that will be so crowded with people during the day.

All that proves, however, is that High Line Park can't be expected to perform miracles. Its vista is finally only a boon for its human visitors.