Palin and the truth about Paul Revere 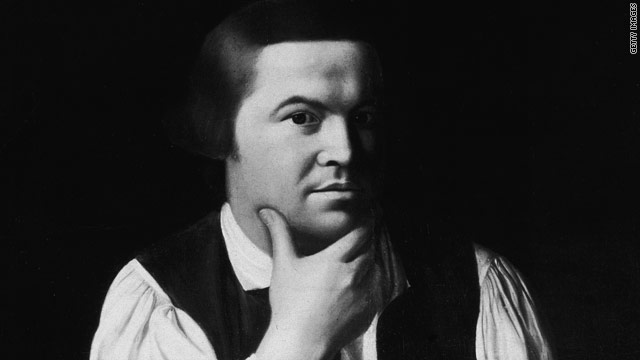 This black-and-white photo shows a portion of the portait in oil of Paul Revere, by John Singleton Copley, circa 1768.
STORY HIGHLIGHTS

Editor's note: Kenneth C. Davis is the author of "Don't Know Much About History," which will be published this month in a newly revised, updated and expanded edition by HarperCollins.

(CNN) -- "Listen, my children, and you shall hear / Of the midnight ride of Paul Revere, / On the eighteenth of April, in Seventy-five, / Hardly a man is now alive / Who remembers that famous day and year."

If nothing else is right about Henry Wadsworth Longfellow's poem, first published more than 85 years after that legendary ride, the part about not remembering the day and year rings true.

Since Sarah Palin's impromptu discourse on Paul Revere, there has been much discussion of her account. She referred to the famed horseman as, "He who warned the British that they weren't going to be taking away our arms by ringing those bells and making sure as he's riding his horse through town to send those warning shots and bells that we were going to be secure and we were going to be free."

Her words provoked an awful lot of hysteria, but not enough history, about this signal event.

It would be easy to turn this into a "gotcha" moment, to catch misconceptions and mistakes -- of which many of us are guilty. Survey after survey show that many Americans are woefully inadequate when it comes to knowing about our nation's past. So maybe we can call this one of those teachable moments that gives us a chance to bust myths and perhaps learn a larger lesson about why we are so confused about our history and what we can do about it.

First, to Paul Revere and his "midnight ride."

To set the scene. Revere's legendary ride started -- as Longfellow stated -- "On the eighteenth of April, in Seventy-five." The Declaration of Independence was more than a year away. George Washington was not yet in command of a Continental army. In fact, there was no army and no United States. Most of the 13 colonies' inhabitants considered themselves British subjects, many quite loyal to the Crown.

That is sad. And dangerous. It is sad because history is compelling, fascinating and instructive, if we tell the real story.
--Kenneth Davis

But it was a tense, dangerous time in Boston, then under martial law. Some 3,000 British troops, many living in private homes under the Quartering Act, were despised by the people of Massachusetts. Boston was reeling under a harsh economic blockade passed in the aftermath of the "Tea Party" in December 1773. Jobs were scarce and the mood was made grimmer by a smallpox epidemic.

Animosity between the British and the insurgents was high. When colonial militiamen seized British gunpowder from a New Hampshire fort in December 1774, the rumors of war ratcheted even higher. In spring 1775, Gen. Thomas Gage, the British military governor of Massachusetts, had one simple goal: Arrest the treasonous ringleaders of the "insurrection," political firebrand Samuel Adams and wealthy merchant John Hancock, and capture some hundred barrels of gunpowder hidden in Concord.

On the night of April 18, 1775, Paul Revere, silversmith, engraver and denture-maker, and several other patriot messengers, got their riding orders from Dr. Joseph Warren, one of the patriot ringleaders. Warren had learned through his spies that the British would move to capture or kill Hancock and Adams. Revere and other riders, including tanner William Dawes, were dispatched to warn the two men that British troops were on the move to arrest them in Lexington and seize the powder hidden in Concord.

Revere arranged for the famous lantern signal to be hung from the Old North Church to alert the other riders in case he was captured. In Charlestown, across the river from Boston, Dawes and others awaited word of how the British troops would move: "By land" if they were marching across Boston Neck; or "by sea" if they were crossing the Charles River in longboats. It was "by sea," but a poorly organized operation. It took hours for the British troops to cross the Charles.

Setting out around 11 p.m., Revere and Dawes both reached Lexington by separate routes and warned Hancock and Adams, stopping along the way to alert local patriot militia -- the Minute Men -- that "The Regulars are coming out." Then they were joined by a young physician, Samuel Prescott, and headed for Concord. British soldiers on patrol stopped them, Revere was captured and his horse taken from him; Prescott escaped.

By then, the word had spread among the farmers and merchants, those Minute Men who had been training as a militia for months, to await the British at Lexington and Concord Greens. In the early morning of April 19, 1775, shots were exchanged between the rebels and Redcoats. Who fired the "shot heard round the world" is a mystery. But as the British later trudged back to Boston, they were attacked constantly. Veteran troops of the world's most powerful army took heavy losses that would shock London. The die was truly cast. The American Revolution was under way.

The truth of Revere's ride, the long road to American independence and the real people behind that extraordinary moment is a far more compelling narrative of intrigue, courage and a life-and-death battle for power than the "bedtime story" version most of us recall from half-remembered third grade poetry.

But we prefer holding onto a tidy scenario of pride and patriotism that is neither accurate nor memorable, if we remember at all. Instead, we settle for ignorance, as periodic surveys of American knowledge of history routinely prove. Or we cobble together a sketchy narrative combining fact and fiction to comfortably fit our political agendas.

That is sad. And dangerous. It is sad because history is compelling, fascinating and instructive -- if we tell the real story.

But it is also dangerous when people "cherry pick" pieces of the story to suit their purposes, when the foot is cut to fit the shoe. A sanitized but incomplete, or worse, wildly inaccurate, version of history can be cited to support just about any political stand. Like scripture, the words and deeds of the Founders, mixed with bits and pieces of American mythology, are trumpeted to support positions on every issue from individual rights, states' rights, gun rights or gun control, to taxes, immigration, public prayer and, most dangerously, taking the nation to war.

When American history is gutted, innocently, ignorantly or deliberately, the outcome can be deadly. If we are told that there is no separation of church and state in the First Amendment, that the Founders worked tirelessly to end slavery or that the Revolution was all about taxes on tea, we are hearing half-truths or outright fabrications. Our extraordinary history deserves better. The truth shall set you free.

By the way, Paul Revere, a true American hero who took enormous risks, served in the militia during the Revolution but was later accused of cowardice. A court martial acquitted him in 1782 and he lived a long, prosperous life, dying in 1818 at age 83.

And Longfellow? He too suited historical facts to fit his purposes. An ardent Abolitionist, he wrote his poem in 1861 to inspire patriotic sentiment among fellow Unionists, turning Revere's ride into a symbolic warning as the nation confronted the next great crisis -- the Civil War.

The opinions expressed in this commentary are solely those of Kenneth Davis.