Don't let up on AIDS research

By Seth Berkley and Phill Wilson, Special to CNN 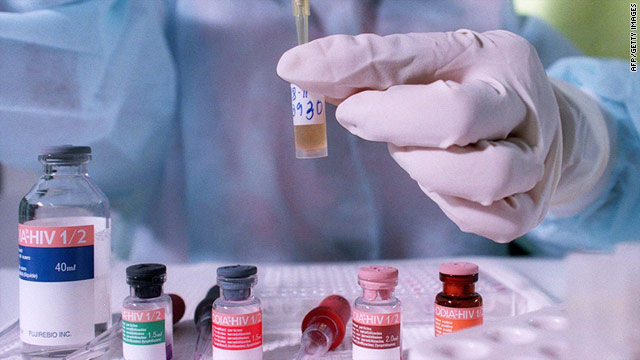 In 1998, a little over 10 years into the AIDS epidemic, a Department of Health medical technologist tests blood samples for HIV
STORY HIGHLIGHTS
RELATED TOPICS

(CNN) -- Thirty years ago this month, the first report of a lethal disease that appeared to be selectively stalking gay men appeared in the Morbidity and Mortality Weekly Report of the U.S. Centers for Disease Control. The disease was AIDS; its cause, unknown. But it quickly became clear that the disease didn't threaten only gay men -- hemophiliacs and intravenous drug users, among others, soon joined the list.

It wasn't until January 1983, however, that an editorial comment in the MMWR -- accompanying the case histories of a black woman and a young Hispanic woman with AIDS -- noted the possibility that women, too, could contract the disease, through heterosexual contact.

We now know, of course, that women are especially vulnerable to HIV for reasons that have as much to do with biology as with gender inequality and outright exploitation. But the report prefigured a second theme of the ensuing American epidemic: the toll it would take on minorities, particularly people of African descent.

Though blacks constitute only about 13% of the American population, they account for 40% of all US AIDS-related deaths, half of all Americans living with HIV, and an even greater proportion of new HIV diagnoses. Today, a black woman in this country is 19 times more likely to be HIV-positive than a white woman, and two to four times as likely to be thus diagnosed as a Hispanic woman.

Black men too, especially those who have sex with other men, bear a heavy HIV burden, accounting for 29% of all new infections in the U.S. One in 16 black American males will acquire HIV in his lifetime.

The societal ills and behavioral patterns that drive such disparities are not easily redressed. They can, however, be partly circumvented -- at least for the purposes of HIV prevention -- if we're willing to invest in the development of biomedical tools to that end. Fortunately, the latest U.S. National Vaccine Plan is in sync with that view. But a slash-and-burn approach to budget-cutting, in vogue in Washington these days, could strip this plan of its profound long-term promise.

The prospects for HIV prevention have never looked better. In the fall of 2009, U.S. military and Thai researchers announced results from a massive clinical trial in Thailand that established for the first time that vaccines can prevent HIV. In that trial, the candidate vaccine was shown to be only modestly effective.

Still, the proof of concept revitalized a field whose champions had grown accustomed to grindingly slow progress. Next came the news last summer that researchers in South Africa had found that a vaginal microbicide gel reduced infections in women who used it routinely by 39%.

Then, as the research community savored this second surprise, researchers studying the daily use of AIDS drugs to prevent HIV reported last November that their approach could cut HIV infections in men who have sex with men by 44%.

And most recently, on May 12, the HIV Prevention Trials Network announced the incredible results of its study, which found that HIV-positive persons taking HIV medications were 96% less likely to transmit HIV to HIV-negative sexual partners than those who were not taking HIV medications. This is an enormous breakthrough in our ability to control the epidemic.

Meanwhile, basic research in AIDS vaccine design has advanced markedly. Scientists at and affiliated with the International AIDS Vaccine Initiative and researchers at the Vaccine Research Center of the U.S. National Institutes of Health have isolated potent antibodies that can block infection by a wide spectrum of HIV variants. These antibodies hold in their molecular folds vital clues to the design of broadly effective AIDS vaccines. Their analysis is spurring a renaissance in HIV vaccinology.

We are today on the verge of a revolution in AIDS prevention, and it has arrived not a moment too soon. Treating people who have HIV is an imperative, but it will never beat the pandemic: For every person put on anti-retroviral therapies today, two are newly infected. Only effective prevention can reverse this trend.

The first U.S. National HIV/AIDS Strategy -- released by the Obama administration last July -- concurs, calling for investments in research on "new and innovative" tools to prevent HIV. Among such tools, HIV vaccines would have special advantages: Recipients would ideally need to be immunized just once or perhaps a few times over the course of their lives. They would protect recipients from HIV regardless of their gender or place in any given social hierarchy -- whatever their partners might choose to do.

In an era of strained finances, it makes sense to invest in solutions that save money in the long run. HIV vaccine development fits that bill. As we mark the 30th anniversary of AIDS, there could be no better way to commemorate the occasion than to renew our commitment to its end.

The opinions expressed in this commentary are solely those of Seth Berkley and Phill Wilson.