AIDS brings out best, worst in us

By Vincent Marconi, Special to CNN 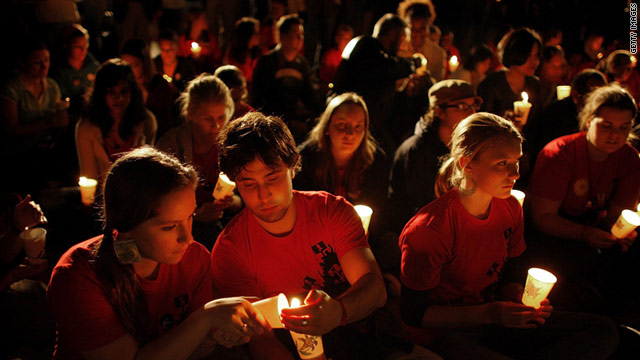 People hold candlelight vigil to remember those who have died of AIDS on World AIDS Day 2006 in Washington.
STORY HIGHLIGHTS

Editor's note: Dr. Vincent Marconi is associate medical director of the Grady Health System's Infectious Disease Program at the Ponce de Leon Center in Atlanta and a member of the faculty of the Emory University School of Public Health. He formerly served as director of the U.S. Air Force HIV Medical Evaluation Unit and Research Program in San Antonio, Texas. Marconi also works with colleagues at McCord Hospital in Durban, South Africa.

Atlanta (CNN) -- A patient in his early 20s from our clinic will be buried later this week. His story is unfortunately all too common here in Atlanta. He had been in and out of treatment and care for several years as he fought homelessness and poverty. Despite recently returning to care, he would spend his final year battling AIDS-related lymphoma. This fight he did not win.

As I write this, another patient, a man in his 40s with HIV and cirrhosis from hepatitis C, is having medical care withdrawn after massive intestinal bleeding from liver failure.

After relocating from up North, he had significant difficulties getting back on HIV medications because of the challenges associated with losing his job-related health insurance and trying to get on the AIDS Drug Assistance Program (ADAP). While working and caring for his family, he was finally able to re-engage with care. Unfortunately, it was not soon enough.

They both join a long list of young men and women who have succumbed to this disease in an age with highly effective medications that are easy to take but not easy for everyone to get despite living in a rich, developed country. This paradox remains at the center of HIV treatment and care for select regions in the U.S. as HIV/AIDS turns 30 years old.

I can hardly remember life or society before this disease. My first memories, from the early 1980s, are of newspaper headlines recounting a new disease, labeled "GRID" (Gay-related Immunodeficiency), that was killing young, gay men. As a boy working in our family's shop in Florida, we would often talk with the Ray brothers, who were regulars.

The Ray family had left Arcadia after their house had been burned down. The parents had recently won a legal battle with the DeSoto County School Board, who had prohibited the three hemophiliac sons from attending public school because they had become infected with HIV.

Explain it to me: AIDS
RELATED TOPICS

At the beginning of the 1990s, we lost a family member to AIDS. Throughout those early years, I worked as a phlebotomist to pay for college.

There were only two or three of us who would draw blood on patients with HIV, as most others were either too afraid or preferred to stay away if at all possible. The fight against HIV seemed desperate. Looking back now, I can see how these earlier events were impactful and transformative in shaping the direction of my career.

Then in 1996, we witnessed the arrival of effective HIV treatment. Despite these advances, it was surprising to us that these new "cocktails" did not seem to make a substantial difference for our patients in inner-city Baltimore. They would develop advanced AIDS and would ultimately die.

Eventually, it became clear that this discrepancy was rooted in the social systems and challenging living conditions facing these individuals.

After moving to Boston in 2000, I noticed that patients did better than those in Baltimore. Certainly the regimens improved over time (fewer pills, more potent and tolerable), but still an individual's socioeconomic status and education had a greater impact on outcomes than any other factor. For most of the developed world, there was a sense that the disease was slowly coming under control -- fewer new infections and people living longer, healthier lives.

This health care gap only widened as the third decade of AIDS progressed. Among many others, Paul Farmer was perhaps most adept at galvanizing a generation of young medical professionals around the struggle for human rights and social justice. He did this by aligning our motivation to treat those with HIV with the goals of addressing the social determinants of poor health both in the U.S. and abroad.

In 2005, I began active duty service in the Air Force. I was amazed at how strong and determined gay men with HIV were to serve, despite the terrible discrimination they faced. They are a silent, unknown group of men who remain committed to serving this country despite the fact that many would prefer them to quit. Because of the foresight of some in the government, free access to treatment is given to these individuals for life, whether on active duty, retired or separated. This universal care has produced superior outcomes as a result.

Upon returning to the civilian life in Atlanta in 2009, I felt as if I had returned to where we started so many years ago. Pneumocystis, toxoplasmosis, cryptococcal meningitis and other opportunistic infections associated with advanced AIDS are just as prevalent at our hospitals here as they are in South Africa or were in the U.S. 25 years ago. The main difference is that today these young, African-American men and women do not have the benefit of powerful voices to call attention to this problem. Their cries of pain go unheard.

The Southeast is where the HIV/AIDS epidemic is growing fastest in the U.S., and Atlanta is at the eye of the storm. A confluence of circumstances has created this problem. They include racism, poverty, food insecurity, poor education, crack cocaine, the sex trade, homophobia and stigma (particularly religious-based).

These factors not only provide the groundwork for HIV transmission but also make it more likely that HIV-infected individuals will not seek access to or remain on treatment.

Although we are fortunate that drug assistance programs exist, they are now substantially underfunded in many states, including Georgia. These programs are inadequate and filled with administrative hurdles such that many could not get any treatment were it not for the heroic efforts of HIV clinics pooling a significant number of resources to help their patients.

As I reflect on the meaning of 30 years of this struggle, a flood of tragic images rushes past my mind:

-- The 28-year old divinity student found wandering the quad in a fog after finals, later to be diagnosed with advanced AIDS.

-- The 37-year old man abandoned by his family and spending Christmas alone in the hospital.

-- The 58-year old man forever silently lamenting his partner's death in a one-room apartment, his body permanently disfigured by his HIV medications and consolation found only in a bottle of whiskey.

-- The 50-year old grandmother sitting by her hut on the side of a dirt road in rural South Africa, legs outstretched and staring off into space as the eighth grave was being dug by caring neighbors as a final resting place for the last person in her family.

At the same time, so many fond memories and stories of unsung heroes and triumphs fill me with pride and optimism:

-- The HIV-infected nurse who rocked congenitally infected babies to sleep every night in the hospital when no one else would.

-- The gay activist who would not relent in the face of hate and denial.

-- The scientist laboring round the clock sacrificing family.

-- The adherence counselor working for months without pay because patients needed his help.

Since its arrival in our world, HIV/AIDS has forced us to examine how we treat one another. It compels us to question what we believe, who we love and why we chose to ignore some of those around us while reaching out to help others.

It highlights our vulnerabilities but also provides us an opportunity to overcome systemic barriers and societal injustice.

At the Grady Health System Infectious Diseases Program (also known as the "Ponce de Leon Clinic"), a single mother can receive outpatient chemotherapy, have her eyes examined by an ophthalmologist and get housing assistance while having her children occupied in a day care room. Another patient can have substance abuse counseling, get his teeth cleaned and obtain legal assistance all under one roof. These kinds of programs can also serve as a model for the care of other chronic conditions such as diabetes and cancer, not just HIV/AIDS.

As Francis Peabody stated more than 80 years ago, "The secret of the care of the patient is in caring for the patient."

We must focus our care on the individual and deliver high-quality, evidenced-based medicine while reaching out to the community to assist in the effort to improve social conditions.

After 30 years, this disease continues to remind us that we are not finished yet. At the same time it remains a witness to the tremendous impact that even a small group of individuals can have when deeply committed to a cause.

The opinions expressed in this commentary are solely those of Vincent Marconi.