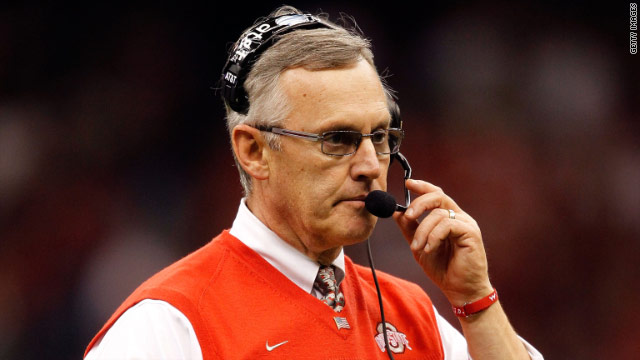 The resignation of Jim Tressel as OSU's head football coach is a reminder of another painful time in the school's history.
STORY HIGHLIGHTS

(CNN) -- Thirty-three years ago, Woody Hayes hit me with a sucker punch.

On Monday, Jim Tressel hit me with one, too.

I was in my sophomore year at The Ohio State University (yes, that's the proper name, so deal with it) when Hayes let loose on Bauman. I felt sick to my stomach watching the embarrassing spectacle the symbol of my school perpetrated before a national TV audience. It was unimaginable. Hayes was legend, a beacon of what was good and right, a person who visited the sick in hospitals. Heck, he even refused salary increases, saying it might get in the way of winning football games.

With one swing of his fist, he was done, fired for the blow he landed on Bauman.

As a young Buckeye, you just wanted a brush with Woody. I envied my roommate because Hayes actually stopped to chat with him on the Oval in front of the main library. I was thrilled when Hayes waved to me and my mates as he drove by the intramural fields one evening.

That's why it hurt when high school friends who didn't have the privilege of being Buckeyes (and we really all wanted to be Buckeyes), those who went to Akron or Cleveland State or Ohio University, laughed at me, delighting in the tarnishing of an idol.

It took years to flush the pain from my system, to heal the wound -- the wound that festered with those so many losses to Michigan in those post-Hayes years, losses that always came with a reference to how Woody's record against That Team Up North was so much better than that of the coaches who succeeded him, Earle Bruce and John Cooper.

It took Jim Tressel to erase all that. He came to OSU in 2001, a former Buckeye assistant who won four Division I-AA championships at Youngstown State. It seemed a certainty that Tressel, a true born-and-bred Ohio boy like Hayes, could bring true glory back to Ohio Stadium on Saturday afternoons.

The faithful were soon rewarded. My Buckeyes actually beat That Team Up North in Tressel's first season. They finished 7-5 that year, but that one win in Ann Arbor was a sure sign that our scarlet-and-gray nightmare was over.

A year later, the wins kept coming, blowouts and squeakers, against Top 25 teams and also-rans. I pulled the old OSU gear from the back of the closet, sporting it for each successive game, each of which became a TV appointment again, as did watching the highlights and replays on ESPN. Tressel was behind that, restoring my pride in my alma mater.

Miami, this was a program I could sneer at, that I could revile. Here's what Sports Illustrated's Alexander Wolff wrote about Miami in 1995 in an open letter to the university's president, calling on him to end the Hurricane football program:

"Miami football has been worse in more ways over a longer period of time than any other intercollegiate athletic program in memory. Scan the list of abuses that beset college sports, and your football team can claim, going back to 1980, at least one entry in virtually every category: improper benefits; recruiting violations; boosters run amok; academic cheating; use of steroids and recreational drugs; suppressed or ignored positive tests for drugs; player run-ins with other students as well as with campus and off-campus police; the discharge of weapons and the degradation of women in the football dorm; credit-card fraud and telephone credit-card fraud."

The straight-laced, conservative, good Christian Tressel led the Buckeyes (with Michigan-born quarterback Craig Krenzel) over the favored and defending national champion Hurricanes, a program with that ignominious pedigree. Ah, how good it felt to be a Buckeye. Good over evil.

My Take: Jim Tressel should make us rethink sports evangelization

When one of the heroes of that championship year and one of Tressel's first recruits, running back Maurice Clarett, was suspended from the team the next year amid claims of academic and criminal misconduct, I easily dismissed it as no reflection on the coach. How could he have known what all of those players get up to?

The questions kept coming over the years involving Buckeye standouts like Chris Gamble and Heisman Trophy winner Troy Smith, but I kept my head in the sand. The Buckeyes and Tressel were winning.

When, late last year, star quarterback Terelle Pryor and four other players were suspended for the first five games of the coming season for violating NCAA rules on trading memorabilia, I put on a brave face. We'd get through it, still beat Michigan, still probably go to a great bowl game.

It really wasn't that hard. This was Tressel, for Woody's sake. Even university President E. Gordon Gee knew how things lined up in Columbus.

Gee's response when asked in March if Tressel might be fired: "No, are you kidding? ... I'm just hopeful the coach doesn't dismiss me."

Tressel didn't say goodbye to Gee. Caught lying to the NCAA, Tressel asked that his original two-game suspension in the tattoo case be increased to five games. He slapped himself on the wrist.

The NCAA alleges he lied about what he knew about Pryor and others trading Buckeye stuff for tattoos. And Sports Illustrated was about to report on a slew of new allegations involving Tressel, Buckeye players, shady characters and new cars around campus.

Inside the Sports Illustrated report

I really didn't need Sports Illustrated to confirm what I knew in my gut: The whole program has been built on lies. Integrity thrown away for wins. The national championship undeserved, my allegiance undeserved. My school disgraced again.

The sucker punch hurts more this time. One, I'm a veteran journalist, paid to be a skeptic, so I should know better. Two, this has to be deeper than Tressel. I say that because of this lame defense offered by university President Gee in a USA Today op-ed column on Tuesday:

"I am very proud of the academic accomplishments of our nearly 1,000 men and women athletes," Gee writes. "In fact, as reported last week in this paper and others, Ohio State's football team ranked first in academic performance among the nation's top 25 teams. Clearly, those young men are very appropriately taking advantage of the opportunity to pursue their educational dreams."

So I'm supposed to believe that the football players had time between the tattoo parlor and the car dealerships to go to class? They were taking advantage of opportunities, I'm sure, but I seriously doubt an education was among them.

Gee goes on to write that Ohio State faculty are "nurturing democratic processes in the Ukraine" (I feel a Kiev political scandal coming) and "unraveling the link between emotional stress and disease." (Cool, I'm the perfect subject for the clinical trials. Sign me up!)

What's next for Ohio State?

So I've had enough of Tressel and Gee and Pryor and the lot. I'm putting the scarlet and gray T-shirts and sweatshirts in the back of the closet. I'm deleting the Buckeye Bleacher Report from my e-mail. And I'm not going to pay attention to college football ...

... At least until November 26, when they kick off the annual showdown with That Team Up North.

The opinions expressed in this commentary are solely those of Brad Lendon.