Even in suicide, soldiers' families deserve condolences from president

By Gregg Keesling, Special to CNN 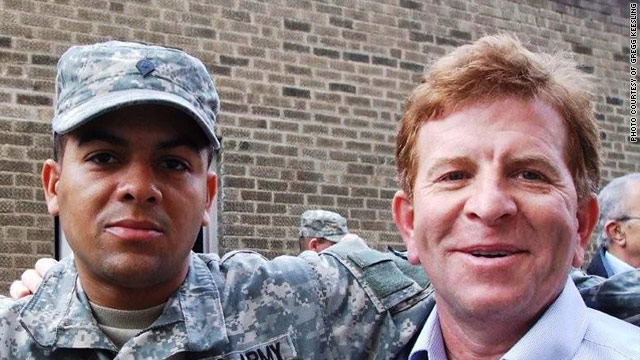 (CNN) -- Two years ago, my son, Army Spc. Chancellor Keesling, died by suicide in Iraq. He was 25 and on his second deployment.

Shortly after his death, my wife, Jannett, and I learned of a long-standing policy in which presidential letters of condolence are withheld from families of American service members who die by suicide.

We wrote to President Barack Obama on August 3, 2009, asking him to reverse this policy, and since then we have tried to keep up a steady drumbeat for change. There has been a fair amount of media attention, including from CNN, and recently U.S. Sen. Barbara Boxer, co-chair of the Senate Military Family Caucus, and a bipartisan group of Senate colleagues sent a letter to the president on behalf of this issue, echoing a bipartisan request from House members.

We learned in late 2009 that the White House would be reviewing the policy, when then-White House spokesman Robert Gibbs told then-CNN reporter Elaine Quijano that the White House had inherited this policy and was reviewing it. Yet as of this writing, we and the hundreds of other families whose children have died by suicide while at war wait for a result.

I wonder: What is the White House reviewing and why it is taking so long?

An action by the president would send a powerful message throughout the military ranks to take mental health issues more seriously. Suicide among those who have served in Iraq and Afghanistan has become an epidemic. Last year a Pentagon report found that every 36 hours, a soldier commits suicide.

Let me tell you about Chance.

Our handsome boy entered active duty service in October of 2003 at the young age of 18. He joined up while still in high school in response to 9/11. We were proud, though we had many reservations. In December of 2005, Chance was deployed to Iraq, where he served as equipment operator and gunner on tactical convoys.

Obama urged to reverse policy on no condolence letter for suicides

He completed his four-year enlistment in late 2007 and left the army, turning down a $27,000 re-enlistment bonus. His marriage broke up during his deployment. He was devastated.

He had been on suicide watch late in his first deployment. His battle buddies recognized he was in trouble after he threw his wedding ring into the Tigris River. His gun was taken away for 10 days.

We were so happy when he came home, left the enlisted army, got a job, a new girlfriend and began to rebuild his life; 2008 was a very happy year for Chance and our family. He was strong and healthy -- he could lift 300 pounds and run a mile in under six minutes.

But his 2003 commitment also included a four-year stint in the Ready Reserves, so in 2008 he became a weekend warrior with a 10-man unit in Indiana.

Soon that group was deployed, and Chance was assigned to the 300-man 961st Engineer Company from Sharonville, Ohio, a subordinate unit of Task Force 844 based in Baghdad. They had only spent a few weeks together before going off to war.

Shortly after arriving in Baghdad, he had a fight with his new girlfriend. He told my wife "this deployment is going to be like the last one. I can't take another whole year like that knowing the one I love is leaving me."

Our son died by suicide in a latrine at Camp Striker in Baghdad on June 19, 2009. Chancellor's unit returned from Iraq in April of 2010. His was the only death of any kind suffered by the 961st.

His awards and decorations included the Army Achievement medal and the National Defense Service medal. The military investigation into his death revealed that Chancellor was a good soldier and one who was loved by his unit. He was in charge of physical training, and his battle buddies and leadership told us stories of Chance's exploits motivating other soldiers to train and become more fit. His commander and immediate superiors were shocked to learn that he had been under suicide watch in 2007.

We later learned that The American Portability Act prevents battlefield trauma information from a soldier's enlisted time from being shared with his reserve unit without the soldier's express written consent. No one knew about Chance's state of mind, and the only way they could have known was if he had told them.

We believe that is an especially tough burden to place on soldiers. Chance told us it was impossible to do that because he would not have been believed and that it would have appeared he was just trying to get out of being deployed.

We encouraged him to talk with the chaplain, but I believe that was very hard to do, too, as might be construed as a show of weakness and above all else, our son wanted to be strong. Unfortunately, Chance never found a way to communicate with the leadership of this new unit.

It was all very surreal, having Army personnel come to your home and tell you your son had died overseas while serving his country.

It is my belief that many in the military consider suicide a dishonorable way to die. That feeling goes through the ranks and makes talking about mental health issues difficult for many soldiers, like it was for my son. While there are committed military personnel trying to address this issue, it seems that there is difficulty of the message reaching down through the ranks.

I applaud the efforts of Mike Purcell, who recently launched a project "Putting A Face On Suicide". Purcell also lost his son to suicide in 2008.

Purcell's public service piece and the actors and personalities who appear in this video make a good case for why family members left behind deserves an acknowledgement from the country for their sacrifice.

I believe the president's refusal to acknowledge a family like ours plays a role in perpetuating the idea that suicide is not honorable and that it is not a serious issue.

I think by changing the policy, President Obama would send a powerful message that we cannot tolerate what is happening to our troops.

The opinions expressed in this commentary are solely those of Gregg Keesling.