When the Reds showed their legs 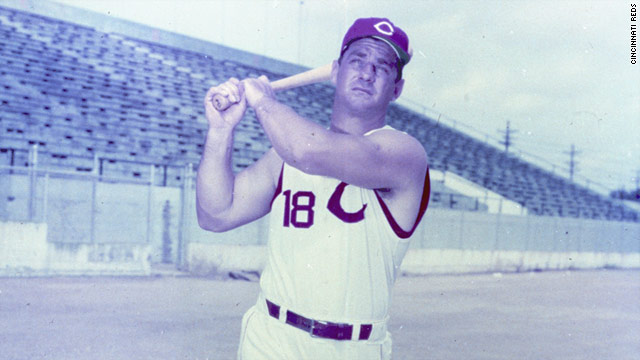 Ted Kluszewski was a fearsome slugger in the days when the Reds were called the Redlegs.
STORY HIGHLIGHTS

Editor's note: CNN contributor Bob Greene is a best-selling author whose books include "Late Edition: A Love Story" and "When We Get to Surf City: A Journey Through America in Pursuit of Rock and Roll, Friendship, and Dreams."

I asked the question out of habit. And, as sometimes happens, at least one person with whom I was talking shot a look of confusion at me. Redlegs? What was I referring to?

I was referring to the Cincinnati Reds of the National League, a team and a nickname as old as professional baseball itself. For six seasons during the 1950s, though, the official name of the team was changed to the Cincinnati Redlegs. For those of us who were kids just discovering baseball in those years, "Redlegs" was the only name we knew for the team. Some of us, reflexively, still use it.

Behind that name switch in 1953 -- and the switch back to "Reds" before the 1959 season -- is a story of politics, and American cultural values, and the sometimes odd things we do in the face of perceived foreign or domestic threats. It's a story both comical and serious, and it's probably safe to say that many sports fans today know nothing about it. The present-day Reds feature a whimsical mascot known as Mr. Redlegs, but the decidedly non-whimsical history has faded.

"I don't think the younger fans make the association between the name 'Reds' and the anti-communist Red Scare of the 1950s," said Greg Rhodes, the team's official historian. "But that was the reason, no question about it -- the team's management did not want anyone to mix the ball club up with anything that had to do with communism."

It's a story both comical and serious, and it's probably safe to say that many sports fans today know nothing about it.
--Bob Greene
RELATED TOPICS

In those years, Sen. Joseph McCarthy of Wisconsin had gained great influence by going after communists -- who were known in headlines, in speeches, in corner-tavern conversations and just about everywhere else as "Reds." And here was the Cincinnati baseball team, proudly bearing the name Reds. Could the team just ignore what was on the front pages and in the everyday American vernacular?

Evidently not. According to Rhodes, in April of 1953 the team decided that it would be not the Reds, but the Redlegs. Among other things, this would lessen the chance that, after a home-run barrage that defeated, say, the Pirates, there would be a banner headline declaring: "REDS BOMB PITTSBURGH."

Cincinnati, at the southern tip of Ohio, has always been a pretty traditional, nonflamboyant town. The citizens of the '50s loved their Reds. It is doubtful that any of the fans were worried that the P.A. announcer at Crosley Field would suddenly intone: "Now pinch-hitting for shortstop Roy McMillan ... Nikita Khrushchev."

But, as of 1953, Redlegs it was. And for those of us in that part of the Midwest who were, for the first time in our lives, following big-league baseball, it was as if the Reds had never existed. We listened to play-by-play man Waite Hoyt broadcasting the Redlegs games; as the 1950s wore on we became fiercely loyal to the Redlegs teams and the players whose names we knew by heart: Johnny Temple and Smoky Burgess and Ray Jablonski and Gus Bell and Wally Post, and the Redlegs' skipper, manager Birdie Tebbetts.

And, above all, there was the Redleg who inspired awe at the very sight of him:

His arms were so massive that he had to cut or rip the sleeves from his uniform jerseys. That's how he came up to bat: with his huge arms extending from the shoulders of the jersey that could not contain them. A communist threat to Cincinnati? A different kind of Reds causing trouble in southern Ohio? Preposterous. If a flotilla of communist red soldiers was speeding up the Ohio River to attack the town, Big Klu was strong enough to repel the invaders all by himself.

The Redlegs name was accepted rather quickly; in the earliest years of the team's history it had been known as the Red Stockings, so Redlegs wasn't such a stretch. Chad Dotson, founder of a respected baseball website that reports and comments on the present-day Cincinnati team, chose the name of his site with affection: Redlegnation.com. "I've always just liked the term and the way it sounds," he said.

One of his contributors, Steve Price, told me that, long after the Redlegs were the Reds again, his youth baseball league in Kentucky still played in heavy wool uniforms that were passed down from season to season: "I proudly wore 'Redlegs' across my chest, complete with high red stirrups over my ankles."

Could such a thing happen today: Could, because of political or social sensitivities, the nickname of a famous professional team be changed? There is regular discussion about the names and mascots of the Atlanta Braves and the Cleveland Indians; the Washington Bullets of the National Basketball Association became the Washington Wizards in 1997 because of the violent connotation of the old name. And, away from the sports world, as Redlegnation contributor Chris Garber points out, it wasn't so long ago that the congressional cafeteria declared that it was serving freedom fries instead of French fries.

By the start of the 1959 baseball season, the owners of the Cincinnati Redlegs had decided that enough was enough. The team would be the Reds again. In a quote variously attributed to a team executive and to a sportswriter of the era: "If the communists don't like it, let them change their name. We were the Reds before they were."

Time has a funny way of smoothing things out. The great Cincinnati teams of the 1970s were known as the Big Red Machine, and no one drew any political inferences from it. On electoral maps, what are areas of the United States called that tend to vote for conservative Republican candidates? Red states. It seems that all the Reds/Redlegs commotion, in the end, was about nothing.

And anyway, according to team historian Rhodes, no nickname could be as bizarre as another one that the Cincinnati ball club had very early in its history.

The town, at the time, was home to a big pork-packing industry. And Cincinnati was becoming a metropolis.

Thus -- Rhodes promises this is true -- for a brief time the team was known by a name that even Big Klu would have winced at: