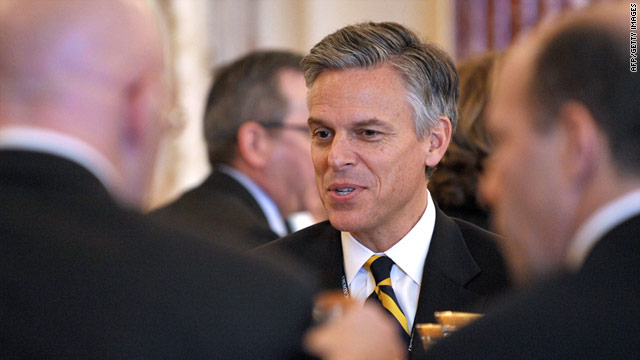 (CNN) -- With Mitch Daniels' decision to opt out of the 2012 presidential race, Jon Huntsman is the lone standard-bearer of the center-right in a crowded GOP field.

Historically, that should put the former Utah governor in a strong position to compete for the nomination. But in the increasingly conservative Republican Party, the activist class has called him a Republican in Name Only, or RINO, and worse. It's not an entirely surprising accusation -- after all, Huntsman's most recent job was as President Barack Obama's China ambassador.

Nonetheless, it would be a big mistake to count Huntsman out. He has a path to the nomination and the distinction of being the Republican candidate that Democrats would least like to run against in the fall of 2012.

Successful Republican nominees have been able to unite the three dominant factions of the GOP: national security conservatives, Wall Street and the religious right. Huntsman has shown credible signs of being able to court all three. And this part weekend, he made the pilgrimage to Kennebunkport, Maine, to get the all-important Bush family benediction.

But Huntsman's ace up the sleeve is his ability to appeal to centrist and independent voters. It's a matter of style as much as substance at this point.

In a party where candidates try to out-"conservative" each other every day, Huntsman calls himself "a pragmatic problem solver."

When Huntsman makes the following statement on climate change, it resonates because of its sheer reasonableness in contrast to conservative conventional wisdom: "I'm not a meteorologist. All I know is 90 percent of the scientists say climate change is occurring. If 90 percent of the oncological community said something was causing cancer, we'd listen to them."

Even his criticisms of Obama reek of common sense, as with his gentle rebuke of the president's Israel-Palestinian peace plan: "If you respect Israel," Huntsman said, "we probably ought to ask what they think is best."

On culture war issues, Huntsman stops short of picking up Daniels' call for a "truce," but he's clearly an advocate of the big tent. He supported civil unions as governor of Utah and still retained a sky-high 80% approval rating into his second term.

"I believe in civility," he told CNN's John King. "I believe we ought to have a civil discourse in this country. You're not going to agree with people 100% of the time, but when they succeed and do things that are good, you can compliment them."

On fiscal issues, conservatives can look at Huntsman's record as governor with confidence. He supported a series of tax cuts that aimed to create a more business-friendly environment in Utah, improving its competitiveness in the global economy. During his tenure, Utah was named one of the best states to do business in and the "best managed state" by the Pew Center on the States.

But beyond a strong support for school choice and experience as a China hand (he also was deputy secretary of commerce and ambassador to Singapore under President George H.W. Bush), Huntsman's policy positions at this point are largely a blank slate. To cite one small barometer, a glance at his "On the Issues" online policy page finds most areas blank.

To date, that hasn't been a detriment, surprisingly even when it comes to gaining influential social conservative support. Huntsman's personal charisma and easygoing charm has enabled him to pick up some pivotal endorsements that will help inoculate him against RINO attacks.

Chief among these is South Carolina's Mike Campbell, the son of the still-revered former GOP Gov. Carroll Campbell and state co-chair of Mike Huckabee's 2008 campaign. He's also gained the support of Sam Brownback's 2008 campaign manager, Rob Wasinger. And no less than Mississippi Gov. Haley Barbour forcefully dismissed suggestions that Huntsman was a RINO, saying on "John King, USA": "Jon Huntsman and I served together, and while we don't agree on some issues, there's no question that he's a conservative."

Huntsman also might be the candidate who can best bring together the often-warring Bush and McCain wings of the modern Republican Party. "Huntsman has inherited the 'maverick' mantle ditched several years ago by Sen. John McCain as he made his way to the Republican presidential nomination," Taegan Goddard of the Political Wire said, noting that former McCain aide John Weaver is playing a senior role in his exploratory effort. The big question is whether Huntsman will need to ditch the maverick label as well to have any shot at winning in 2012.

But with candidates such as Daniels dropping out of contention, and Chris Christie and Jeb Bush offering Sherman-esque denials, Huntsman's current positioning could serve him well in both the primary and general election.

The field is crowded with candidates who perhaps overlearned the lessons of 2010 -- namely, that an angry, activated base can create a sea-change election. The problem with that understanding of American elections is that it does not translate well to presidential election years. Midterm elections are high-intensity, low-turnout affairs. But voters who turn out in presidential election years are more representative of the electorate at large. They are more centrist and independent.

The partisan primary process still forces candidates to contort themselves to please the base on the way to winning the nomination. But in 2012, with a half-dozen candidates all trying to stake a claim on the far right of the field, an uncontested candidate representing the center-right just might win enough votes to claim victory in New Hampshire, Nevada, Florida and beyond. It's no accident that Huntsman seems to be set on establishing his 2012 headquarters in Orlando, a swing district of a pivotal primary in a must-win general election swing state.

At the end of the day, Huntsman's biggest weakness might turn out to be an unexpected strength. As Obama's China ambassador, he has no choice but to be the candidate who embodies civility and the ideal of a loyal opposition. He can credibly say, "I wanted this president to succeed. But it's become evident over the course of his administration that we have very different philosophies of government. I want to elevate the debate in 2012. I want to give the American people a civil, substantive choice about the future direction of our nation."

This message will resonate with the overwhelming number of Americans who want to see an end to Washington's hyper-partisan infighting. Huntsman's approach could give swing voters who personally like Obama permission to vote against him in the fall of 2012. It's the politics of addition, not division: an affirmation of old American wisdom once articulated by Benjamin Franklin. You catch more flies with honey than vinegar.

The opinions in this commentary are solely those of John Avlon.