Fresh out of college, slim hope for a job 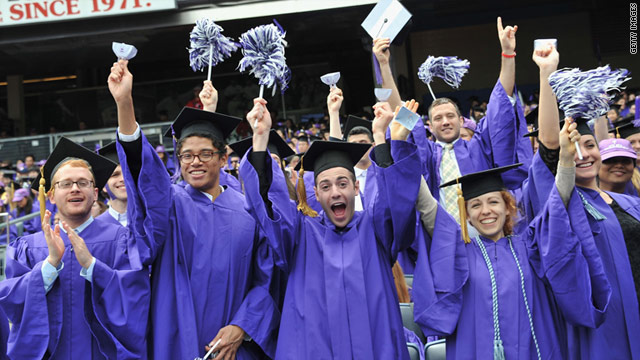 New York University graduates celebrate at their commencment May 18. Things might not be so cheerful on the job hunt.
STORY HIGHLIGHTS

(CNN) -- This year's college graduates had reason to believe that job prospects for the class of 2011 might be brighter than those of recent classes tossed into the dark abyss of the Great Recession. News throughout their senior year seemed different -- flush with stories of rising stocks, record corporate profits and new signs of consumer confidence.

Sadly, rumors of a recovering labor market might have been greatly exaggerated. Large numbers of recent graduates are still out searching for their first full-time job, years after their own commencement celebrations held years ago.

That is among the conclusions of "Unfulfilled Expectations: Recent College Graduates Struggle in a Troubled Economy," a new national research report from the John J. Heldrich Center for Workforce Development at Rutgers University.

The Heldrich Center -- with Knowledge Networks of Menlo Park, California -- interviewed a random sample of nearly 600 graduates from the classes of 2006 through 2010 at four-year colleges and universities nationwide, to document their efforts to launch a career in the most volatile economy in decades.

The findings are a sobering reminder of how deep the recession has cut into the American labor market, even for those who have earned a college degree. Just over half of recent college graduates are working full-time, and half of those who are employed are working in jobs not requiring a BA or BS degree.

Members of the class of 2011 may be forced to make uncomfortable adjustments from their original expectations of post-college life to the reality described by the just slightly older graduates from the previous five years.

Young college graduates entering the labor market in 2011 are competing with millions of unemployed college graduates who have already made significant accommodations in order to get their first job: taking a position that paid a lot less than expected; working below what they regarded as their level of education; or accepting a job outside their area of interest.

And while these new graduates struggle to find their first job, most are entering the working world with a median debt of $20,000 and 83% still owe most of what they borrowed. Not surprisingly, nearly one in four graduates report that they still live with their parents as a way to manage their budgets.

The number of recent graduates working in a field unrelated to their major is larger for students who graduated in 2009 and 2010 -- 43% -- compared with just 22% for pre-recession graduates. And while most are satisfied with their college education, three quarters would do something different during college if they could do it over again.

Large percentages now say they would have been more careful about their choice of major (48%), done more internships or worked part-time in a related field (47%) and started looking for work sooner (38%) while still in school.

Millions of recent college graduates will pay a steep price for years. Their diminished starting salaries, various studies have shown, will be a long-term drag on their future earnings. The burden of their extensive student loans and other debt may further undermine their ability to buy a home or affect decisions about getting married and starting a family.

Perhaps most troubling, a solid majority of recent college graduates we surveyed now believe that their generation will not do better than the one that came before them; not even half expect to have more financial success than their parents.

The corrosive effect of the Great Recession may rob the United States of much of the optimism that young graduates traditionally brought to our work force and society -- replacing it with growing doubts about the long-standing American dream that each new generation will enjoy more prosperity than the last.

The opinions expressed in this commentary are solely those of Carl Van Horn and Cliff Zukin.