Gingrich vs. the GOP 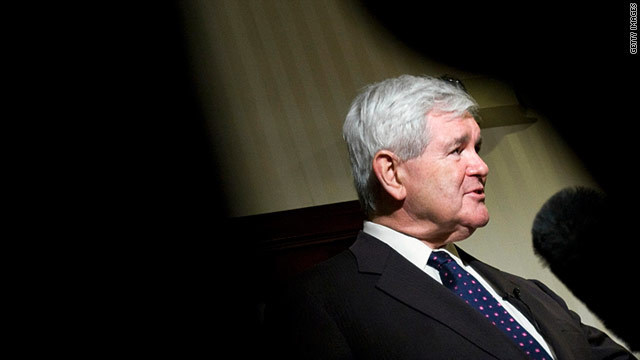 Newt Gingrich meets with reporters after a speaking appearance at the Kiwanis Club luncheon this week in Dubuque, Iowa.
STORY HIGHLIGHTS

Editor's note: William Bennett is a CNN contributor and a fellow with the Claremont Institute. Bennett and Seth Leibsohn are the authors of "The Fight of Our Lives: Knowing the Enemy, Speaking the Truth, and Choosing to Win the War Against Radical Islam."

(CNN) -- For years, former House Speaker Newt Gingrich was seen as a Republican guiding light. Not only did he show a lot of the party -- and the conservative movement -- how to fight when we were not in the majority (especially in the 1980s and early 1990s), but with his use of language and passion, he showed us how to win majorities.

The landslide congressional takeover of 1994 made Gingrich the indispensable man of the moment. But there was a problem that would reveal itself shortly after 1995 and ever since.

Gingrich is a broad-thinking and broad-speaking public intellectual. He can expatiate on a number of issues, from foreign to domestic policy. But he can also rush in where he should not, with verbal grenades that can put his whole movement and party on the defensive. This past weekend, Gingrich did exactly that. But the Republican Party has rallied and now Gingrich is, himself, the one in trouble.

On "Meet the Press" this past Sunday, the former Speaker was asked about Republican efforts, as led by House Budget Committee Chairman Paul Ryan, to reform Medicare and rein in federal spending. His response: "I don't think right-wing social engineering is any more desirable than left-wing social engineering. I don't think imposing radical change from the right or the left is a very good way for a free society to operate."

When the host, David Gregory, asked for clarification from Gingrich, explicitly asking whether he was disagreeing with Ryan's approach, Gingrich said that Ryan's plan was "too big a jump," and an example of a "conservative imposing radical change." Although he has since apologized after several attempts to defend these statements, giving his campaign another chance, the damage from this interview may still be long lasting.

To work off this in reverse, it is a critical part of the Ryan plan that it does not "suddenly impose" a "radical change," as Gingrich said. In fact, it would not even affect anyone 55 or older. Second, when looking at reforming entitlements, one of the great successes of the "Gingrich revolution" in the 1990s was the reform of the welfare entitlement in 1996.

The Personal Responsibility and Work Opportunity Reconciliation Act, or welfare reform, was much more radical than the Ryan plan on Medicare, which has been described as a conservative version of a sober, long-term and detailed effort to keep Medicare sustainable and provide its recipients with more choices and options.

As David Brooks summarized the Ryan plan, it turns Medicare "into a defined contribution plan. Instead of assuming open-ended future costs, the government will give you a sum of money (starting at an amount equal to what the government now spends) and a regulated menu of insurance options from which to choose."

Brooks was right when he posited that Ryan's overall plan would "set the standard of seriousness for anybody who wants to play in this discussion."

There was someone else who agreed with that as well -- Newt Gingrich. Just over a month ago, on April 5, Gingrich said on my radio show, "Paul Ryan has stepped up to the plate. ... This is a very, very serious budget, and I think rivals with [what] John Kasich did as budget chairman in getting to a balanced budget in the 1990s, just for the scale and courage involved. ... Paul Ryan is going to define modern conservatism at a serious level. ... You can quibble over details but the general shape of what he's doing will define 2012 for Republicans."

Evidently, Gingrich said much the same to others as well, saying he'd even vote for the Ryan proposal.

But aside from his change in view of the Ryan plan over the past month, perhaps the oddest locution Gingrich used was when he called the plan "right-wing social engineering," on par with "left-wing social engineering." This is political moral equivalence that will be used again and again by the Democrats in opposing Ryan's prescription.

One of the first rules of politics is not to give your political opponents their talking points or write their ads for them. That's what Gingrich did -- and without much explanation as to why -- upsetting the nearly unified Republican support for Ryan's plan (only four House Republicans have opposed it).

Finally, Gingrich said that rather than what Ryan proposed, what was needed was "a national conversation to get to a better Medicare system with more choices for seniors." Google "Paul Ryan" and "Medicare" and you will see the kind of precise "national conversation" that Ryan has, in fact, begun.

What Gingrich did on Sunday was make that conversation opaque, leaving many of us who have been talking about it confused as to just what Gingrich would support, especially after showing what he has supported cannot be counted on to last.

Ryan and his supporters will be able to rescue and defend their plan in the public debate over Medicare, and we hope even bringing it to fruition. And many in the movement have jumped to the Ryan plan's defense (see here as but one of many examples). What will be much more difficult is for Gingrich to rescue himself.

The advice I gave to Gingrich on my show yesterday, when he generously took time out to go through all of this again, was this: "You take a man in the totality of his acts, and you have done much to advance the cause, but you didn't on Sunday and you need to acknowledge it."

Now that he has done so, the question remains: Is it too late?