Gingrich inspires another GOP revolt -- against himself 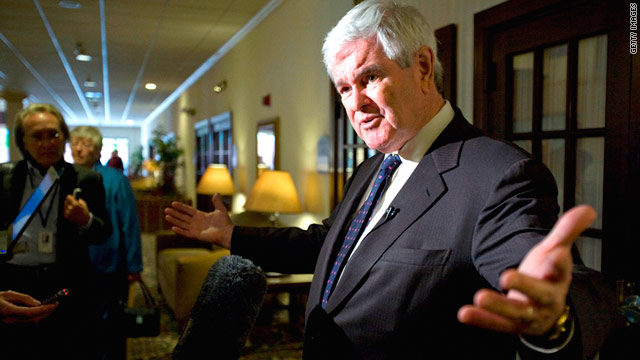 Washington (CNN) -- It's unusual, to say the least, for a presidential candidate to have a defining campaign moment on Week One of the campaign, but Newt Gingrich never disappoints: Right out of the box on Sunday TV, fresh from his presidential announcement, he declared the House GOP plan for Medicare "right-wing social engineering." Then he went on to explain how he still supports individual mandates in health care -- despite the fact that the mandates are the key to the Republican attacks on the president's health care law.

Just another day on the Gingrich campaign, in which the candidate throws gasoline on a fire. And then walks into it.

Privately, one source close to Gingrich says, "he immediately understood what he had done and was worried."

What he probably didn't get is just how bad the fallout would be.

Outraged Republicans erupted in unison (don't forget: nearly every House Republican voted for this Medicare plan). Gingrich, of course, had to spend the next day backtracking, re-explaining, defending, parsing and, er, restating his complete devotion to the House budget chairman's "model" and his unequivocal opposition to President Barack Obama's health care plan. And, for a measure of good luck, he blamed the media, describing himself as a victim of "beyond gotcha" politics.

If anyone played "gotcha" here, it was Gingrich -- on himself, and on the Republican Party.

First, Newt, what has Republicans scratching their heads is one simple question: Why?

"If you want to dig deep into what this tells us about Newt, it's that he's lost a sense of the conservative constituency in the party," says one disappointed GOP ally. "Why doesn't he know that these issues [the House GOP budget and Obama's health care mandate] have become the Holy Grail for GOP primary voters? He used to get the pulse of the Republican Party better than anyone."

Well, not anymore. Not since he cut off the blood supply.

Which brings us to Republicans. Sure, we can blame Gingrich for his big mouth. But we can't blame him for exposing what is a huge divide within the GOP right now: Most every House Republican is on the record supporting a budget that profoundly changes Medicare. They have gone home to their districts and have been bombarded with complaints. Their leadership has sometimes wavered -- only to re-endorse -- the plan.

To make matters worse, they all know it's not going anywhere in the Senate. So House Republicans are now out on a limb. Conservatives are happy, but there are 61 House Republicans who now serve in districts Obama won in 2008. They're already nervous. And now this. "Gingrich re-opens this issue in a way that gives a perfect sound bite to every Democrat that voted against the budget," says a GOP House campaigns strategist. "Now Republicans will be forced to explain why their position on Medicare is not radical social engineering."

It's an eerily familiar story. No one has to tell Republicans what happened to Democrats who dared reform health care: They lost control of the House in the 2010 midterm elections. And what issue was used against them? Medicare.

None other than Newt Gingrich, in his damage control tour, told the Wall Street Journal that this time Republicans were making the same mistakes Democrats made when they forget to sell health reform. "Republicans should learn," he said. "There's a big lesson here."

Yes, there is. Only it's not about salesmanship. It's actually about substance. Rep. Paul Ryan, the author of the GOP budget roadmap, likes to call his budget realistic and honest as it takes on Medicare spending. But it's more about theology than realism because of what it omits: tax hikes. So don't tell people you are going to change Medicare unless you're taking on everything. That's the lesson, only it's one the GOP refuses to utter. Even Gingrich, who threw Ryan overboard, would never say that.

Instead, he will no doubt continue to inflame. Even his friends say he can't help it. After all, he pioneered the use of incendiary language successfully when he masterminded the GOP takeover of the House in 1994, calling the Democrats thugs and corrupt. "He uses inflammatory language no matter what he is talking about," says one irritated ally. "Why can't he express a thought in a calm, rational way?"

The problem with scorched-earth politics -- and language -- is there's always going to be payback. Only this time, Gingrich is getting it from the party he wants to lead, not destroy.