How to spot a bullied child and what to do

By Jodee Blanco, Special to CNN 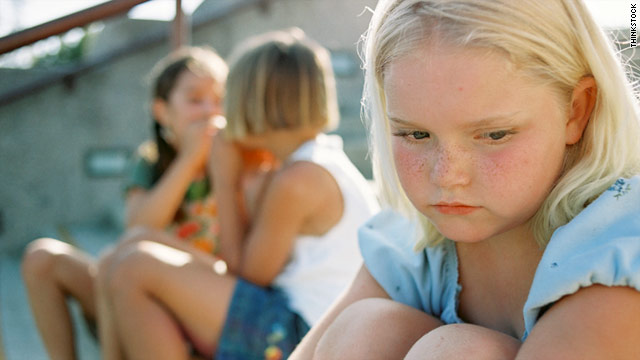 Jodee Blanco says parents and other adults need to be alert to signs a child is being bullied.
STORY HIGHLIGHTS

(CNN) -- As a former victim of bullying who speaks at schools across the country, I meet many distraught parents who want advice on how to help their bullied child. I ache for them because I remember what my own mom and dad went through, never knowing the shape I'd be in when I came home from school.

When two Minnesota eighth-graders, Haylee Fentress and Paige Moravetz, took their own lives in a bullying-related suicide pact last month, my heart not only went out to their parents, but also to the parents of every bullied student.

Many might have been asking themselves, "These girls weren't alone, they had each other, why would they do this?" and wondering, "Could this happen to my child?" We can't bring Haylee and Paige back, but we can honor their lives by saving other kids from similar desperation.

There are two types of bullied students. First, "the overt victim," who is bullied in obvious ways, such as teasing, taunting, verbal and physical assault, intentional and aggressive exclusion, being laughed at and put down constantly, gossiped about, or cyberbullied.

Then, there's "the invisible student," the kid who is treated as if he or she doesn't exist, who isn't necessarily intentionally excluded, but whom no one thinks to include. This is the child who goes through school feeling like a ghost. Being an invisible student is sometimes more damaging in the long-term. If you're overtly bullied, you can say to yourself, "There's something wrong with them." But if you feel like you don't exist, you may falsely conclude, "There's something wrong with me."

Even if two best friends have each other for support, it might not be enough to stave off these negative feelings, as may have been the case with Haylee and Paige.

Know the danger signs of a bullied child in crisis. Some are obvious and exactly what you'd expect. Others are subtle, and surprising. Look for these behaviors:

-- Inexplicable fits of rage: Does your child blow up at the least provocation?

-- Overreaction to normal, daily frustrations: Does your child overreact to people and situations that never would have bothered him or her before?

-- Faking illness to avoid going to school, or even making themselves sick.

-- Impaired immune system and frequent illness: The constant stress and sadness associated with severe bullying can weaken your child's immune system. This, coupled with a child's wishing he or she were sick to get out of school can be a powerful combination.

-- Extreme makeover attempts: Has your child suddenly gone from preppie attire to all Gothic or punk?

-- Sudden change in weight: Has your child started gaining or losing weight at an alarming rate?

-- Despondency or depression: Is your child sad, lonely and unmotivated?

-- Change in grades: Have your child's grades gone down, or way up? Bullied kids sometimes immerse themselves in academics as an escape. But when they realize that even with straight A's, they're still lonely, they can spiral into a dark place.

-- Desperate attempts to win friends: Has your child started to give in to peer pressure, perhaps engaging in questionable or self-destructive behaviors that she or he would never have considered doing before?

-- Moodiness: Is your child sullen one moment, obstinate the next?

-- Distractedness: Is your child unfocused and preoccupied?

Parents must keep in mind, to prevent any bully-related suicide attempt, that the bullied child is bleeding emotionally and spiritually from loneliness and isolation. If you don't deal with that first, it could render whatever else you do tragically irrelevant.

Parents often get so caught up in mitigating the problem -- contacting the school, confronting the parents of the bullies, pushing for punishment of the bullies, talking to the police, retaining legal counsel -- that they forget to tend to their bleeding child first.

Your priority is to find a new social outlet for your child, someplace where he or she can engage in an organized activity with other kids the same age and forge meaningful friendships completely outside of school.

It will buy you the time you need to deal with the larger issues. It will give your child something to look forward to and boost confidence. The more confident children are, the less they are targeted.

Additionally, bullied students often emit a subtle desperation for friendship that makes their peers uncomfortable. Once your son or daughter begins building new relationships, it can diminish some of that desperation. Park districts, dance studios, community theater programs, public libraries and chambers of commerce are good places to start -- but make sure they're located a few towns away from your school district to ensure your child will make new friends.

And keep in mind what we've learned from the recent tragedy with Haylee and Paige -- just because your child has a best friend doesn't make her immune from desperation. If you suspect your child and her closest buddy are both struggling to fit in at school, enroll them in an activity together. You could end up saving two lives.

The opinions in this commentary are solely those of Jodee Blanco.