Morgan Spurlock: Why I sold out 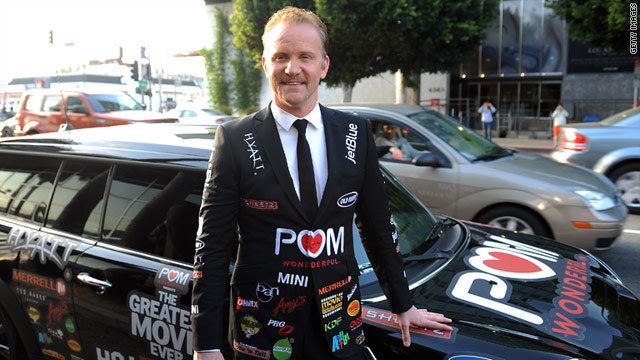 Editor's note: TED is a nonprofit organization dedicated to "Ideas worth spreading," which it makes available through talks posted on its website.

(CNN) -- A few years ago, Morgan Spurlock was watching a season premiere episode of "Heroes." In it, a cheerleader, played by Hayden Panettiere, meets her father as she walks out of her new school and heads toward the parking lot.

"The camera dollies past the car and you see the Nissan logo go through the frame," Spurlock recalled. And then her father surprises her by giving her the keys to the family's sparkling Nissan Rogue SUV. "On my God, the Rogue!" she screams. "You're the best dad in the world!"

Nissan had signed a deal to sponsor and market the show, which agreed to place the manufacturer's vehicles in many of its episodes.

Spurlock, a documentary filmmaker, and his co-writer/producer, Jeremy Chilnick, talked about the episode at work the next day. "We were so completely blown away and offended by this happening to the show and talked about other shows this was happening in, and we said why don't we make a movie that explores this topic?"

And so they did. But the result is not just a critique of product placement and the constant, ubiquitous advertising we see in our everyday lives. The film is itself the ultimate in product placement and advertising -- it was totally paid for by companies seeking to promote products. That's why it's called "Pom Wonderful Presents: The Greatest Movie Ever Sold." It opened in theaters Friday.

Watch an interview with Spurlock about the film

Explaining the concept in a talk at the TED 2011 conference in February, Spurlock took the notion even further by selling the naming rights to his talk, a TED first (and, Spurlock concluded, likely a last).

As Spurlock recounted in an interview with CNN, it was no easy task to find companies willing to back the film. His team started calling ad agencies. "One by one, every ad agency said no and wanted no part of it," he said. "And so we went to the product placement companies and, one by one, every product placement company said they wanted nothing to do with the film. And so we said we should go to the brands themselves and, literally after calling hundreds and hundreds of brands, of which most of them said no, we ended up getting 17," including the Hyatt hotel chain and the company that makes Ban deodorant.

Why were so few interested? "The biggest reason ... was the fact that they would have no control over the final outcome," Spurlock said. "The idea that they would have to relinquish control, that we would be able to do with these brands as we wished in the film, was something no agency wanted to be a part of, and most brands, most companies didn't want to be a part of."

TED.com: Ric Elias on what he learned when his plane crashed

Spurlock gained wide attention with his film "Super Size Me," a 2004 documentary in which he aimed to demonstrate the effects of fast food by eating only McDonald's food for a month. He said he packed on pounds and endangered his health.

He said his new film is more than a stunt. It's intended to show "how much marketing and advertising is in our daily lives, and it starts to pull the curtain back on the process of how we're targeted and how we're marketed to."

"People love to say that they don't care, they know when they're being advertised to. I don't buy that," he said. "I don't think a lot of people realize how much they're being marketed to or how kind of ubiquitous it is -- literally from when I get up in the morning to open my computer, to when I'm driving on the road and what I hear on the radio, to when I get to work and get in the elevator and there it is on the screen, literally on the little windows they have now. And I ride up to my office and turn on the computer and there's another popup, and you look out your window and there's another billboard outside, and it's just really everywhere. And you go to the bathroom and there's the sign over the toilet. There's no place to escape it."

He added, "At what point are you still having an original thought? What ideas are my own? Like when I decide to buy something, did I decide to buy it because I wanted it, or did I make this choice to buy it after so much marketing that hammered me home?"

TED.com: Kathryn Schulz on being wrong

Asked how he would behave if he ran a big consumer brand, Spurlock said he would aim for transparency. "I would want to come clean, let people know how it was manufactured, the impact on communities, where the money goes. I think that in today's world, we want more honesty, we want a little more integrity. The businesses that continue to do that and continue to be open with their consumers are going to really prosper."

Another way things could be different was illustrated in "The Greatest Movie Ever Sold."

"In the film we travel to Sao Paulo (Brazil), where they have banned outdoor advertising." Spurlock said it's "one of the most remarkable things you'll ever see -- there's no billboards, there's no posters, there's no flyers on the sides of telephone poles, it's pretty remarkable. And it's shocking when you first get there, and then when you leave, and you get back to a city where literally it's all over the buildings again, it's even more shocking. Having been in a place where it's gone makes you much more attuned to everything else that's there, from the architecture to the plants and people."