Make Charles king for a day 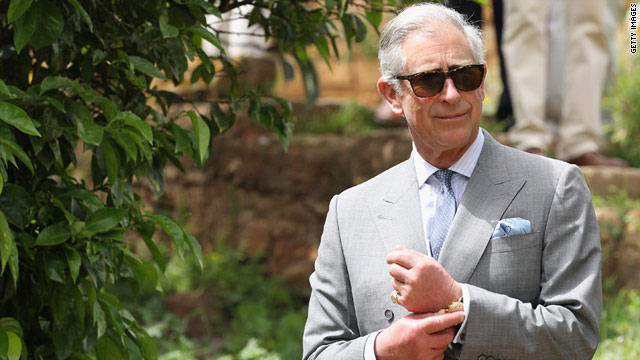 Charles, Prince of Wales, visits the historic site of Chellah on April 5 during a three-day visit to Morocco .
STORY HIGHLIGHTS

(CNN) -- Royalty is not supposed to show any flamboyant outward emotion, but you can't blame Prince Charles if, inside, he's getting a little antsy.

He's 62. He's been waiting to be king for a very long time. The job is his by birthright, but he can't campaign for it. His mother, Queen Elizabeth, will turn 85 this week. She has been queen since she was 25. She doesn't seem to be a woman who is thinking about giving it up.

This month Charles' older son, William, will marry Kate Middleton in a ceremony that will be seen around the globe. Already there is talk that perhaps the line of succession should skip a generation -- that Charles should step aside and allow his son to be the next king of England. William and Kate seem destined to be dashing and popular. Charles, for a variety of reasons, isn't universally seen that way.

He was once. William is 28; the only time I met Charles he was 28, too. He was visiting the United States, and there was a cocktail reception in his honor, at which he mingled easily with a gin and tonic in his hand and made casual, often lighthearted, conversation. This was pre-Diana. Charles was regarded as the epitome of glamour and sharp refinement; when he wasn't being described in the press as "the next king of England," he was being called "the most eligible bachelor in the world."

Charles at 28 ... well, he moved through a room, and through life, with an air of confidence that comes with knowing the highest heights will eventually be yours. At 28, he did not appear to be a person who spent much time contemplating that he might one day be 62 and still be the prince in waiting.

If it is determined that William should be king, Charles can't exactly pack up his bags and become king of, say, Spain, or Sweden.
--Bob Greene

What a man wears to a royal wedding

'The Women Who Would Be Queen'

Back then, he wasn't being portrayed as a brooding, moodily complicated figure. Time magazine, during that period, put him on its cover with the you-can-make-book-on-it line: "The Man Who Will Be King." The magazine wrote:

"If Charles Philip Arthur George Mountbatten-Windsor did not exist, who could invent him? Consider. He can pilot a jet fighter and knows enough about helicopters to help repair them. He has skippered a Royal Navy minesweeper through North Atlantic gales with the skill of a yachtsman handling a racing sloop. He plays an aggressive, three-plus-handicap game of polo and is a qualified paratrooper. He is a gifted amateur cellist who can be moved to tears while listening to the music of Berlioz. He has scuba-dived in the Caribbean, schussed down Alps, sambaed into the night with Brazilian beauties. A keen student of history, he can discourse persuasively on the neglected virtues of his ancestor King George III, and is host and interviewer on a TV series on anthropology. ... He is master of a stately home on 3,000 acres in Kent, which he calls 'the most desirable bachelor pad in Europe.' He has a mischievous, urbane wit, an infectious smile. ..."

You get the picture. But now it is his boy who is 28 and for whom the spotlight is warm and welcoming.

In the 1950s, there was a television show in the United States called "Queen for a Day." It was pretty awful, but had a big viewership. A host by the name of Jack Bailey would interview female contestants, all with heart-wrenching stories of deprivation, poverty, illness and hardship. Then the studio audience, by its applause, would anoint only one of them with that day's title.

An orchestra would play "Pomp and Circumstance." The winning woman would be draped in a regal robe, and a crown would be placed upon her head. She would be led to a throne and handed a bouquet of flowers. She would be showered with expensive gifts. She was queen for a day.

You almost wish that something like that could be done for Charles -- that, even if it is decided inside Buckingham Palace that William's ascension to the throne will be speeded up, his dad will be allowed to be king, if only for a day.

Impossible? Nothing is impossible, for royalty. Queen Elizabeth surely knows a good lawyer or two. Documents could be signed.

There are men in the United States who are happy because they made it to the major leagues in baseball for one game -- sometimes for a single at-bat. It is all they ever wanted, and they got it, for one day. Because of that, they will die content.

Charles doesn't have a lot of options. In the world of business, hard-charging executives who seemed destined for the chairman's suite sometimes get pushed aside; they usually end up running other big companies. Such a path is not available to Charles. If it is determined that William should be king, Charles can't exactly pack up his bags and become king of, say, Spain, or Sweden.

His mother has now been queen for 59 years. She can hand the top job over to someone else by only one of three events: by death, by abdication, or by retirement.

King for a day? It certainly would be a memorable reign, even though it lasted only 24 hours. Something riveting for the history books.

And what a moment it would be the next morning when Charles, leaving the throne and the palace after a single sunset, looked over at William and, with a father's smile, nodded and tossed him the keys.