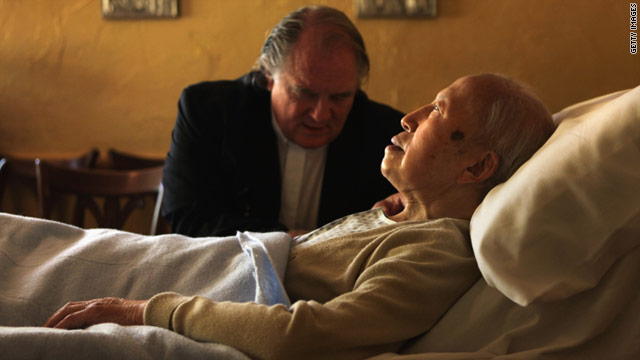 A chaplain prays with a resident in the Hospice of Saint John in Colorado, which accepts people regardless of their ability to pay.
STORY HIGHLIGHTS
RELATED TOPICS

Editor's note: Kristi C. Guillory is an attorney, health policy consultant and freelance writer. She was a presidential management fellow at the U.S. Department of Health and Human Services and served as a senior policy analyst and assistant counsel with The Council of State Governments.

Alexandria, Virginia (CNN) -- The tiny conference room was cold. My heart was beating fast. I was scared to sign the papers and I tried to quell my unremitting hot stream of tears.

I'd thought, as an attorney, that legal documents would never scare me. But, this was no ordinary piece of paper. This was Daddy's DNR order.

A DNR, or do not resuscitate order, is a legal document that ensures that resuscitation efforts will not be attempted if someone suffers a cardiac or respiratory arrest. End-of-life, or advance care planning, is a subject that far too many families avoid discussing until it's too late.

My father's cancer battle culminated last July when he spent the last week of his life in the hospital. That time by my father's side was the hardest week of my life, but my mother and I were "lucky." Lucky, because we knew what my father's wishes were at the end of his life and we had a legal document in place that reflected his wishes.

Advance directives provide instruction for your family and physician about the types of treatment you want at the end of your life. Sadly, most Americans don't have them. A 2003 report by the U.S. Agency for Healthcare Quality and Research found that less than 50 percent of terminally ill patients studied had an advance care directive in their medical record. Of those who had directives, between 65 and 76 percent of their physicians were not aware it existed.

End-of-life planning, unfortunately, has emerged as a hot button political issue. In 2009, House Democrats included a provision in the health care reform bill that would have allowed Medicare to reimburse doctors for end-of-life discussions. Former Alaska Gov. Sarah Palin derided the proposal as "Obama's death panel," falsely asserting that the government would act as arbiter on who would receive health care. Then-Minority Leader John Boehner claimed that encouraging these discussions would be a step toward "government-sponsored euthanasia." Ultimately, the provision ignited such intense vitriol that congressional leaders dropped the provision from the final bill that was signed by President Obama.

This issue emerged again briefly this year. On January 4, the Obama administration withdrew a Medicare regulation that would have reimbursed physicians for discussing end-of-life options with patients during their annual checkups. It was abruptly withdrawn less than three days after the regulations were to become final. The White House argued that the public should have had more time to comment on the proposal and suggested that the provision should have been part of another proposed rule instead.

Many of the arguments against advance-care planning, however, lack merit. The point of the provision was to foster conversation about dying between doctors and patients as well as informed decision making. In an October 2008 study by the Journal of the American Medical Association, researchers found that patients who had these discussions were more likely to accept their prognosis and preferred to receive comfort care, rather than aggressive life-extending therapies. Many choose hospice care, which treats the entire person, both medically and spiritually. Researchers found that patients' quality of life was poorest when they underwent aggressive treatments in the last week of their lives, which often happens when other options aren't discussed.

It is a shame that the federal government isn't making advance care planning easier by enacting legislation on this issue. When the federal government doesn't act on an issue, the states are usually the harbingers of change. In 2008, California became the first state to provide terminally ill patients with full disclosure and counseling. Under the Patients' Right to Know Act, at a patient's request, a physician must provide information about issues such as palliative care, hospice care, and refusal or withdrawal of life-prolonging treatments.

In February 2011, the New York Palliative Care Information Act took effect. The bill provides that if a patient has a terminal illness, the patient's doctor or nurse practitioner is required to offer the patient information on choices. While leadership at the state level should be applauded, a national approach is still needed.

April 16 is National Health Care Decisions Day -- an invaluable opportunity for families across America to begin to make informed health-care decisions or revisit the decisions that have been made. And, imparting a lesson learned from my recent experience, I implore everyone to start the process of advance-care planning for yourself. Figure out what you want, document your wishes, inform your loved ones and urge them to do the same.

My father was known for his gift of gab, but he knew the limits of chatter and often gave me the sage advice, "Nothing hurts a duck more than its beak." To that advice, I would add that when it comes to discussing important issues like advance-care planning with your loved ones, not opening your beak can be just as harmful.

The opinions expressed in this commentary are solely those of Kristi Guillory.