By Benjamin Todd Jealous and Rod Paige, Special to CNN 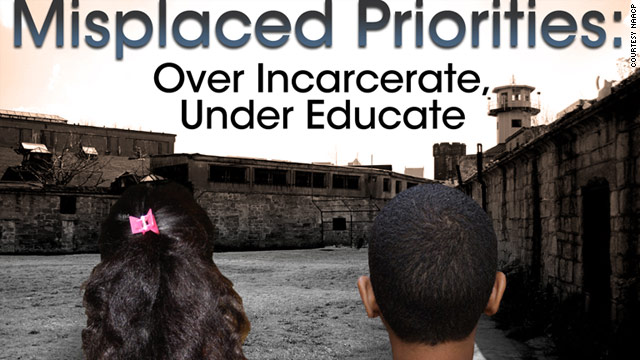 Editor's note: Benjamin Todd Jealous is president and CEO of the NAACP. Rod Paige was the U.S. secretary of education from 2001 to 2005 under President George W. Bush.

(CNN) -- There is a bipartisan tide of lawmakers who are trying to fix our nation's out-of-control corrections system, and make funding for education the priority.

And Gov. Arnold Schwarzenegger asked in his 2010 State of the State address: "What does it say about any state that focuses more on prison uniforms than on caps and gowns?"

A new report by the NAACP, "Misplaced Priorities: Over Incarcerate, Under Educate" details the social and economic impact of runaway prison spending over the past 30 years. As prison populations have grown, prison spending has squeezed out spending on education.

Between 1987 and 2007, the nation's prison population tripled, growing by 1 million people. The United States accounts for 5% of the world's population, but locks up nearly 25% of the world's prisoners. Unsurprisingly, prisons have become a big budget item for many states. During the last two decades, state spending on prisons grew by 127%, six times the rate of spending on higher education.

A bipartisan coalition of lawmakers, reformers and interest groups -- including the NAACP, former chairman of the American Conservative Union David Keene and Grover Norquist, president of Americans for Tax Reform -- is beginning to challenge assumptions about our criminal justice system.

In California, Attorney General Kamala Harris won election by promoting policies that are "smart on crime" rather than "tough on crime." States such as Kansas, Michigan, New Jersey and New York have made a good faith effort to reduce prison populations and close facilities. With the proper reforms, we can ultimately use this funding to address the root causes of our society's crime problem.

The rise in America's penchant for punishment can be traced back to the 1970s, as the "War on Poverty" gave way to the "War on Drugs" and policymakers embraced stricter sentences for drug offenders. Since then, we have spent tens of billions to incarcerate people who struggle with drug addiction and mental health challenges, or are simply jobless or lack education.

Policymakers should be able to propose sentencing reform without fear of being labeled "soft on crime."
--Benjamin Jealous and Rod Paige
RELATED TOPICS

The NAACP's report suggests that this has the highest impact on the most vulnerable communities, which are often communities of color. The "tough on crime" approach to sentencing disproportionately punishes poor and minority communities -- African Americans are imprisoned for drug offenses at 10 times the rate of their white counterparts.

Policymakers should be able to propose sentencing reform without fear of being labeled "soft on crime." Mandatory minimum sentences for nonviolent drug offenses have proven ineffective and racially charged. Public money would be better invested in treatment programs that allow drug abusers to forgo prison, or work toward early release, as a reward for tackling their addictions. Similarly, GED programs provide an opportunity for early release and also motivate prisoners to earn an education, which ultimately helps reduce recidivism. Finally, parole should be more attainable, but prisoners should remain accountable.

A leaner prison system would allow states to really help communities rather than effectively sweeping the most unseemly elements under the rug. "Misplaced Priorities" finds that in Houston, Los Angeles and Philadelphia, the lowest-performing schools tend to be in areas with the highest rates of incarceration.

In these communities, high incarceration rates create a vicious cycle of perpetually lowered expectations. Studies suggest that cyclical removal and return of so many parents leads to a breakdown of formal authority and weakened social networks. Meanwhile, many prisoners re-enter society unable to vote, secure a good job or find safe and affordable housing. Adding under-funded schools to the mix can remove the only source of hope.

The link between education and incarceration means that reforms can be targeted to address this vicious cycle. "Misplaced Priorities" finds that in many cities, a few struggling neighborhoods overburden prison budgets. In one striking example, New York City spends $16.6 million each year to incarcerate residents from the 11216 ZIP code. Residents of 11216 suffer from a 53% unemployment rate and the local high school has a 50% graduation rate. A reformed criminal justice system, along with a renewed focus on education, would benefit this neighborhood immensely, and produce immediate savings for New York.

Over-incarceration is an issue that can appeal to common-sense reformers and budget hawks of any political affiliation. Until we shift our priorities away from prisons and toward education, the vicious cycle of over-incarceration will only continue, therefore undermining America's promise for a better future.

We call on everyone -- parents, policymakers and educators -- to join us in working for solutions to create a quality education for all children. Top-notch education keeps America competitive and the American dream accessible to everyone.