Afghanistan, pushed to the edge 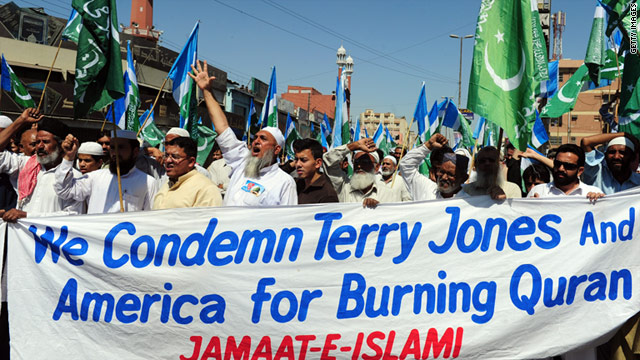 Editor's note: Gayle Tzemach Lemmon is a fellow and deputy director of the Women and Foreign Policy Program at the Council on Foreign Relations. She writes extensively about women entrepreneurs in conflict and post-conflict zones, including Afghanistan, Bosnia and Rwanda. She wrote "The Dressmaker of Khair Khana," a book that tells the story of an Afghan girl whose business created jobs and hope during the Taliban years.

(CNN) -- Deadly protests sweeping Afghanistan in reaction to the Quran-burning by Florida Pastor Terry Jones are a defeat for those on all sides fighting for Afghanistan's peaceful future. They could not come at a worse time for the war effort in Afghanistan or the push to win greater support for the war here in the United States.

For the last two weeks, Afghan media have reported both on the Quran-burning and the horrific charges that American soldiers created "kill teams" that targeted Afghan civilians for sport and captured their murders on video, in some cases even posing with their corpses.

Many Afghans don't realize that these few do not stand for the majority of Americans, who respect Islam and vocally condemn the desecration of a holy book by a rogue, publicity-seeking pastor. And that Americans feel overwhelming shame and outrage at the killing of innocents at the hands of U.S. soldiers, a sentiment particularly strong among those in uniform who see such crimes as a brutal desecration of their own standards and values.

In the last several days, American television has rediscovered Afghanistan, following weeks in which the nuclear disaster in Japan and turmoil in the Middle East dominated the airwaves. Disturbing images of throngs of men in the street shouting against the United States and chilling reports of murderous protesters attacking innocent United Nations employees in Mazar-e-Sharif -- and a girls' high school in Kandahar -- are the only pictures from Afghanistan that Americans have seen recently.

Many Americans don't realize that these few do not stand for the majority of Afghans, who condemn the killing of innocents and feel horror and shame at the attack on United Nations personnel. And that in a December 2010 opinion poll, about 60 percent of Afghans said they continue to support the U.S. military presence in their country and oppose the Taliban, despite growing insecurity.

On either side of this war, America's longest ever, a gulf of understanding gapes ever wider. Increasingly, this chasm separating the two publics is filled by pictures that widen the divide even further. War-weary Americans wonder why in the world they should offer their blood and treasure to a country that burns their flag. Afghans exhausted by war wonder how they can support an American presence that does not even respect their most basic beliefs. Television cannot be relied upon to provide context, but it is expert in igniting emotion.

In the past week, men peddling hate and anger have scored thumping victories. The extremist few have ably outmaneuvered the peaceful many, their heinous acts amplified by repellent images played over and over on television. Those who traffic in destruction have won -- at least for the moment.

On the losing side: men and women of goodwill acting valiantly and quietly each day to build a stronger and more secure country. Among the most soundly defeated are those fighting on all sides for a better future for Afghanistan.

The battle for hearts and minds is not waged in one direction. Right now it is being lost in both.

The opinions in this commentary are solely those of Gayle Tzemach Lemmon.