What changed after the Reagan shooting 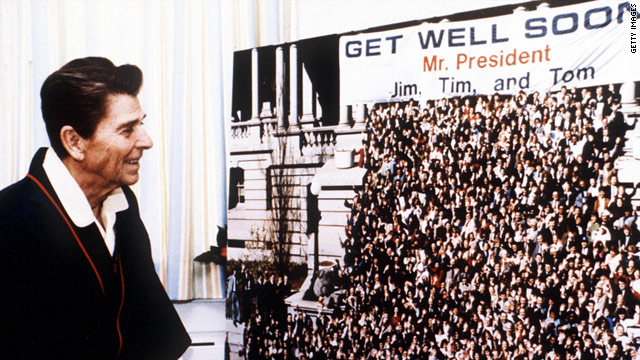 President Ronald Reagan, recovering in the hospital after being shot in 1981, checks out a photo from well-wishers.
STORY HIGHLIGHTS

New York (CNN) -- Ronald Reagan was shot 30 years ago Wednesday. His grace under fire helped him solidify the support and affection of the American people. It also helped propel his economic policies through a Democratic-controlled Congress and put American politics on a different trajectory.

"Rawhide Down," a new book by Washington Post reporter Del Quentin Wilber, captures the fateful 70th day of the Reagan presidency in cinematic detail. It is still striking to read how the severely wounded president insisted on walking himself through the doors of the emergency room, where he collapsed. It is a revelation to find how much closer he came to death than was widely known. And it is inspiring to read the notes he wrote to doctors and nurses throughout the ordeal, such as "All in all, I'd rather be in Phil.," referencing an old W.C. Fields line.

As the late, great David Broder wrote at the time, "The honeymoon has ended and a new legend has been born. ... As long as people remember the hospitalized president joshing his doctors and nurses -- and they will remember -- no critic will be able to portray Reagan as a cruel or callous or heartless man."

Today, Reagan is the only modern president who receives high marks from Republicans, Democrats and Independents alike. A look at the polls can quantify the roots of this enduring good will.

Despite an electoral landslide over Jimmy Carter with a 44-state win in 1980, Reagan won with a narrow popular margin of 50.7%. Moreover, Gallup's valuable presidential poll tracker shows that Reagan's approval ratings were significantly split along partisan lines after his 1981 inauguration, with 74% Republican support and 53% from independents but 38% from Democrats.

In the wake of the assassination attempt, Reagan's approval ratings jumped -- providing a new baseline that propelled his legislative agenda forward and helped translate to his broad-based re-election. By the 100th day of his administration, 51% of Democrats supported him and 70% of independents in addition to 92% of Republicans.

When Reagan came back to the Capitol on April 28 to push for his Economic Recovery Tax Act, he was greeted by a hero's welcome and a three-minute standing ovation. He leveraged his political capital to help pass his agenda. Before the end of the summer, the Reagan tax cuts had passed the House of Representatives, led by Democratic Speaker Tip O'Neill, and the Republican-controlled Senate, reducing top tax rates from a confiscatory 70% and unleashing an entrepreneurial era. "That guy," one House Democrat said of Reagan, "is damned formidable. Even the Democrats back home want him to succeed."

The director of the Reagan Presidential Library, Duke Blackwood, cautions against the revisionist impulse of some historians looking back at this grim anniversary. "Americans love a hero; Ronald Reagan survived an assassin's bullet. However, that can't take away the fact that Ronald Reagan was already on a trajectory of real change with the support of the people. The attempted assassination perhaps gave him a temporary boost. Make no mistake though, it was his leadership and vision that made it all happen, not the result of what a deranged man vainly attempted. Ronald Reagan was destined to lead our country and he did."

The issue of destiny did emerge from this ordeal. Reagan, like his fellow committed anti-communist, Pope John Paul II, who also survived an assassination attempt, felt that his life had been spared for a divine purpose: "Perhaps having come so close to death made me feel I should do whatever I could in the years God had given me to reduce the threat of nuclear war."

Soon after leaving the hospital, he wrote a letter to Soviet leader Leonid Brezhnev expressing his desire for "a meaningful and constructive dialogue which will assist us in fulfilling our joint obligation to find lasting peace."

It is worth remembering that Reagan's survived John Hinckley Jr.'s "Devastator" bullets less than 20 years after the traumatic assassination of President John F. Kennedy and the deaths of the Rev. Martin Luther King Jr. and Robert F. Kennedy.

It closed the chapter on a period of bloodshed in our politics unlike anything seen since the 40 years of the late 19th century in which three American presidents were assassinated: Abraham Lincoln, James Garfield and William McKinley. Reagan's strength, good luck, the professionalism of the Secret Service and the advance of medicine gave us a reprieve and the start of a new era.

Another legacy of the attempted assassination was Reagan's support of some modest gun policies such as the Brady bill (advocated for by the family of Reagan's fallen press secretary, Jim Brady) and a federal waiting period.

In a New York Times op-ed published in 1991, Reagan wrote movingly of that day in which "lives were changed forever and all by a Saturday-night special -- a cheaply made .22 caliber pistol -- purchased in a Dallas pawnshop by a young man with a history of mental disturbance. This nightmare might never have happened if legislation that is before Congress now -- the Brady bill -- had been law back in 1981."

For some contemporary conservative activists, the mere mention of this aspect of Reagan's beliefs is controversial because it departs from established orthodoxy. But Reagan's rugged individualism stood in contrast to group-think. We don't need to whitewash him to honor him.

And this is a day to honor a man who became a great American president, a happy warrior who loved his country and always kept his eye on the horizon. It is a time for giving thanks that we got to know him as well as we did -- not for 70 days, but for eight years in the Oval Office.