Egypt in tug of war for its future

By Isobel Coleman, Special to CNN 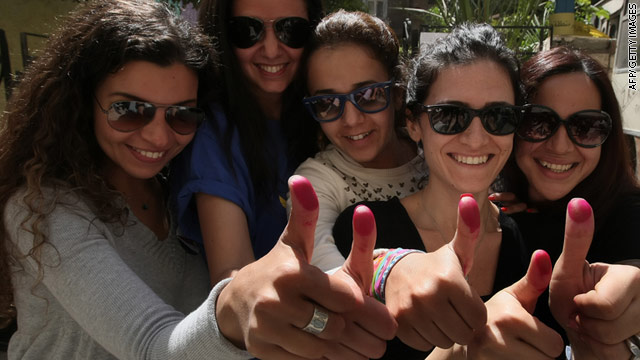 Egyptian women show their ink-stained thumbs in Cairo on Saturday after voting on a package of constitutional changes.
STORY HIGHLIGHTS

Editor's note: Isobel Coleman is the author of "Paradise Beneath Her Feet" and a senior fellow for U.S. foreign policy at the Council on Foreign Relations in New York.

(CNN) -- Egyptians are still basking in the glow of their successful revolution. Taxi drivers in Cairo proudly point out revolutionary landmarks as street vendors hawk revolutionary trinkets. Revolutionary banners drape highway overpasses, and new advertising campaigns on billboards and television appeal to a national spirit of rebirth and reconstruction.

While Egyptians have every right to take pride in the "people protests" that brought down the government of Hosni Mubarak, such revolutionary euphoria is premature. Today, the forces pushing for a full political housecleaning seem to be losing ground to those prioritizing stability.

On one side of this divide stand the largely secular, leftist, urban, youthful leaders of the Tahrir Square protests; on the other stand the old political elements of the Muslim Brotherhood and the military-backed remnants of the National Democratic Party (NDP), as well as large swaths of conservative rural voters.

The complex give-and-take among the various factions is playing out on several fronts, as the Supreme Council of the Armed Forces seeks to offer as few concessions as possible to keep the peace and turn over the running of the country as soon as possible to someone who meets with its approval.

The recent constitutional referendum highlights the brewing tensions. In a largely fair and smooth process, voters on Saturday overwhelmingly approved a set of constitutional amendments that address a number of Mubarak-era grievances: Presidents are now limited to two four-year terms, controversial detainment laws have been nullified, judicial oversight of elections has been restored and eligibility requirements for presidential candidates have been eased.

Yet, opposition to the amendments was strong and included almost all of the leading reformist voices in the country. Reformers opposed the amendments less for their content and more because the amendment process paves the way for quick elections -- as soon as June for the parliament and August for the presidency -- which favors established groups such as the Brotherhood and NDP survivors over little-known independents. (The Muslim Brotherhood, notably, supported the amendments.)

The amended constitution still leaves independents at a disadvantage: To get on the ballot, an independent presidential candidate must have the support of 30 members of parliament or the backing of 30,000 voters from at least 15 governorates. This will be difficult to achieve with presidential elections only five months away, the parliament set to be formed only shortly before and name-brand reform candidates like Amr Moussa and Mohamed ElBaradei enjoying mixed reviews at best among the people.

Moreover, any new party's ability to drum up votes is dwarfed by that of the Muslim Brotherhood, which is well-organized and disciplined. This is not to say that the Brotherhood would carry an election in a country that remains wary of Islamism, despite being deeply conservative and religious.

Indeed, the Brotherhood has said that it will not put forward a presidential candidate, and it tries to ease fears by reiterating its desire to participate politically, but not dominate. Still, the rush to elections favors stability and status quo at the expense of deep and lasting reforms.

Another arena for the tug of war between reform and stability is the truth and reconciliation process, which is only beginning to take shape. As we have seen in Rwanda, Chile, Eastern Europe and elsewhere, there is always the question of how far justice should go.

Fact-finding committees are holding former President Mubarak criminally responsible for protesters' deaths, and former Interior Minister Habib El-Adly, already on trial for money laundering, is accused of ordering police to fire on demonstrators. Again, the military leadership will be forced to walk a fine line between the need to satisfy public demands for justice and its loyalty to Mubarak and other members of the former regime.

The economy is also of critical importance. The stock market finally reopened for business on Wednesday after being closed for two months -- and promptly plunged 10%. Tourism also continues to be weak. Stability, of course, is crucial to banking and tourism, not to mention shipping through the Suez Canal.

Today's military leaders are no doubt keeping a close eye on the economy, not least because of their deeply vested economic interests: The military's economic tentacles extend from real estate to transportation and export industries.

Charting a course of economic reform that undoes the worst aspects of Mubarak's crony capitalism and more widely distributes the benefits of growth, while also maintaining investor confidence, will be as large a challenge as political reform. The need to balance reform and stability suggests that the next president of Egypt is likely to be an establishment figure acceptable to the military yet palatable to voters wanting change.

The big question is whether that combination can deliver the deep reforms needed to provide education, employment and hope for Egypt's millions of young people who think they have just led a revolution.

The opinions expressed in this commentary are solely those of Isobel Coleman.