The biggest star, and the biggest-hearted

By Carrie Rickey, Special to CNN 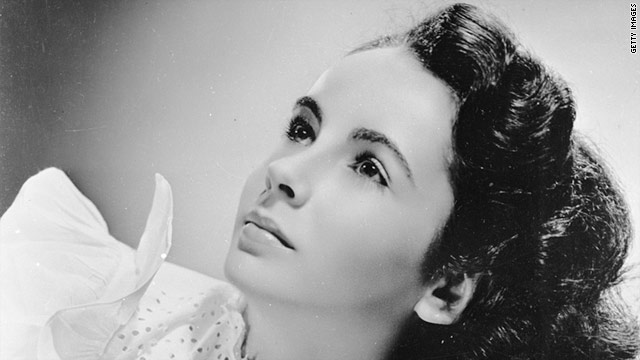 Editor's note: Carrie Rickey is a movie critic for The Philadelphia Inquirer and writes the blog, Flickgrrl. Read her obituary of Elizabeth Taylor at philly.com.

(CNN) -- Like other diminutive people -- Alexander the Great and Napoleon come to mind -- Elizabeth Taylor loomed large and lived even larger. I think of her as one of the two Elizabeths who ruled the 20th century.

But was she -- of the amethyst eyes and ruby pout, the two-time Oscar winner who died of congestive heart failure Wednesday at 79 -- the "Biggest. Star. Ever," as readers and editors have asked?

What metric do we use?

One measure of a woman is the number of citations on Bing.com: As of Wednesday afternoon, Elizabeth Taylor had 101,000,000 references. Before the advent of digital archives, yet another measure was the number of clipping files devoted to her in the newspaper morgue.

When I worked at the Boston Herald during the mid-1980s, librarian John Cronin quipped that by clips' gauge, the most significant figure in the paper's history was not Brookline-born JFK, nor was it legendary Beantown mayor James Curley, who inspired "The Last Hurrah."

The individual commanding the most space in the Herald morgue, a four-drawer file cabinet for clippings and 2½ drawers more for photos, was one Elizabeth Taylor Hilton Wilding Todd Fisher Burton Burton Warner. (She had yet to wed Larry Fortensky.) Cronin cataloged the clips into eight different categories, including Liz Taylor roles, Liz Taylor husbands, Liz Taylor jewelry and Liz Taylor operations. (By the way, Taylor hated the tabloid shortening of her name.)

In 1991 at my current workplace, The Philadelphia Inquirer, librarian M.J. Crowley reported that there were more files devoted to Taylor than to any other celebrity, although President Richard Nixon and Philadelphia Mayor Frank Rizzo occupied slightly more real estate. Crowley observed that "Taylor is more vilified, celebrated and photographed than Jacqueline Onassis, Princess Diana and Madonna put together."

Elizabeth Taylor, in her own words

Larry King: 'She deserved to be famous'

Here is Elizabeth Taylor, by the numbers: 62 movies. Seven husbands. Four children. Two Oscars. First star to make $1 million for a movie (Cleopatra). Raised more than $270 million for AIDS charities. One of the first celebrities to live her life in the public eye. Style icon whose ball gown in A Place in the Sun was knocked off and bought by more than 32,000 teenage girls. At one time, owner of two of the largest known sparklers, the Krupp diamond (33 carats) and the Taylor-Burton diamond (69 carats).

Why do I have this data at my disposal? Since 1979, when I was at The Village Voice in New York, I have written and rewritten Taylor's obituary more than 50 times. Her obit is my personal "Groundhog Day." I've relived her and reappraised her and grown to love her. When a colleague texted me the news of her passing Wednesday morning, tears streamed down my cheeks as though a family member had died.

Did you meet Elizabeth Taylor? Share your photos, memories

The biggest star? As I was growing up, Taylor was more celebrated for her big romances and big jewelry and medical miseries than for her acting. Only when I attended her 1986 tribute at the Film Society of Lincoln Center did I see her as something more than a photogenic face atop a centerfold body.

The well-chosen film clips showed her evolution from plucky pre-teen (Lassie Come Home, National Velvet) to incandescent adolescent (Julia Misbehaves, A Date With Judy); from young lover (Father of the Bride, A Place in the Sun) to womanly beauty (The Last Time I Saw Paris); from wifely mate (Giant) to marital combatant (Cat on a Hot Tin Roof, Who's Afraid of Virginia Woolf) to queen of the known world (Cleopatra).

In her heyday, which spans roughly from the beginning of World War II to the end of the Vietnam War, Taylor enjoyed one of the longest continuous Hollywood careers. Along the way, this great beauty matured into a great screen actress, using her eyes and surprising stillness (surprising considering her tempestuous characters) to command the screen.

As for her private life, along the way, the glamourpuss notorious for collecting men and baubles kicked addictions to booze and barbiturates and remade herself into the ultimate Samaritan by raising money for AIDS research and treatment.

The biggest star? Yeah, and also the biggest-hearted.

The opinions expressed in this commentary are solely those of Carrie Rickey.