Why can't we predict the next big quake? 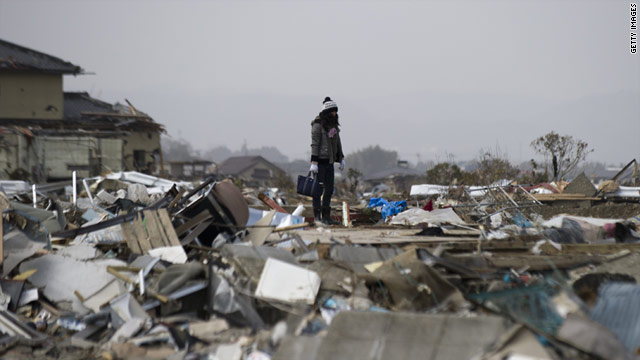 A woman stands on debris in Natori, Miyagi Prefecture, after the 9.0 earthquake and tsunami in Japan.
STORY HIGHLIGHTS

Editor's note: Susan E. Hough is a seismologist for U.S. Geological Survey and a science writer.

(CNN) -- Why can't seismologists predict earthquakes? It's a question and a frustration that understandably springs to mind in the aftermath of a tragedy like the one that continues to unfold in Japan.

In the 1970s and 1980s (not exactly ancient times), leading scientists were quoted in the media expressing optimism that reliable, short-term prediction was just around the corner. Several decades later, the earthquake science community is older and wiser.

We have learned, in short, that prediction is a tough nut to crack. To make the kind of accurate, short-term predictions people want, one would need to identify a reliable precursor -- some signal that we could observe that tells us that a big quake is imminent.

Any number of possible precursors have been suggested and explored. Many seemed promising, but none has stood up to rigorous examination. So far as we have been able to tell, the earth simply does not provide any observable signal to tell us a big quake is on the way.

What we know for sure is that preparedness remains our best defense against devastating earthquakes.
--Susan E. Hough

'I thought Japan would disappear'

Nor does the earth reliably produce big earthquakes on full moons, notwithstanding the predictions that have come out of the woodwork for the days around this month's especially big full moon. (Recall that the moon was unremarkably new on the day the Japan quake struck.)

So, when seismologists are asked whether earthquakes can be predicted, we tend to be quick to answer no, mindful of the years of research and experience in the field of seismology. Sometimes even seismologists forget that in many of the ways that matter most, earthquakes are too predictable. We call it forecasting.

This means we know where the active earthquake zones are on the planet. And, for many if not most of these zones, we have quite good estimates, based on various types of data, of the expected long-term average rates of earthquakes.

Preparing for the great quake

Japan, California, the Caribbean, Turkey, the Himalayan front -- our best assessments of hazard show relatively higher and lower hazard within these zones, but any active plate boundary is fair game for a big earthquake, any time.

The scientific consensus is that the monster quakes, approaching and exceeding magnitude 9, are restricted to subduction zones such as the one where a magnitude-9 earthquake triggered the Japan tsunami. Along the type of plate boundary found in California and Turkey, among other places, the Big One might be "merely" magnitude 8.

Pointing to any one corner of the Earth as the location of the next Big One is not a winning game. Take a map of the world's most active plate boundaries and throw a dart; where it lands is as good a guess as any. The only valid reason for imminent concern about any particular area is, oddly enough, right after a big earthquake has struck. Take Japan for example, where the risk from aftershocks is substantial.

Many people reading this might be tempted to feel thankful that they are not living within one of the planet's hot zones. Who in their right mind would live in California, anyway? Well, guess what.

There are places where big quakes are especially unlikely (but not impossible) -- for example, central Canada. But there are other notable places where scientists know that damaging earthquakes are entirely possible.

Southeastern Missouri; Charleston, South Carolina; Boston -- these regions have all experienced earthquakes larger than the magnitude-6.1 Christchurch, New Zealand, event in February, just within the short historic record. A magnitude-6.1 quake under Boston, or any city along the Atlantic seaboard, would be unlikely but would not shock any earth scientist.

At present, many scientists are pessimistic that prediction will ever be possible, although the jury is still out. Research continues with increasingly sophisticated methods and data.

What we know for sure is that preparedness remains our best defense against devastating earthquakes. As tragic as the disaster in Japan is, it clearly would have been much worse without that country's decades of investment in preparedness -- the stringent building codes, early warning systems, tsunami systems and citizen education.

It is sobering to consider the potential aftermath of a huge, or even pretty big, earthquake in parts of the world where preparedness efforts have lagged. If the risks seem hypothetical, now is a good time to ask, are they acceptable?

The opinions expressed in this commentary are solely those of Susan E. Hough