The 'Michigan fish test' and the Middle East

By Sheena Iyengar, Special to CNN Editor's note: TED is a nonprofit dedicated to "Ideas worth spreading," which it makes available through talks posted on its website. Sheena Iyengar is a social psychologist and professor at Columbia Business School. She is Research Director of the Chazen Institute and author of "The Art of Choosing."

New York (CNN) - When I read about the popular uprisings in the Middle East and North Africa, I think about life under the sea.

Wonder what I mean?

Study the image below for five seconds, then look away and quickly describe it to yourself. 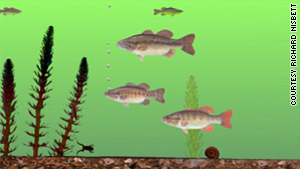 What did you see, and what did you say? Did three large fish, the prominent individuals of the scene, hold your gaze?

Or was your eye drawn more to the environment, taking in the rocks, the bubbles, the kelp?

Just what does this visual exercise have to do with Tunisia, Egypt, or Libya?

It turns out that how you go about even this simple and straightforward task of describing what's in this image depends on your worldview, which is greatly shaped by your culture.

Essentially, people from different cultures will perceive and remember different aspects of the same picture. A perfect example of this phenomenon is how we perceive the current events in the Middle East.

We Americans observe the social shifts sweeping the Arab world--the protests, the struggles, the upheaval. By and large, we hope that we're witnessing the beginning of a new societal story there, one that seems more similar to our own, with its progress towards greater individual control and agency.

Watch an interview with Sheena Iyengar

However, our own culture shapes our expectations at a more subconscious level. In fact, the study associated with the fish image reveals that even basic perceptions are seeded with cultural narrative. So as we regard the tumult in Egypt, Tunisia, and elsewhere, let's consider just how our own perceptions accent the situation.

TED.com: Wael Ghonim's inside look at the Egyptian Revolution

The image here, known in psychology as the Michigan Fish Test, was presented to American and Japanese participants in a study conducted by Richard Nisbett and Takahiko Masuda.

In their five-second viewing, Americans paid more attention to the large fish, the "main characters" of the scene, while Japanese described the scene more holistically. For Americans, the large fish were the powerful agents, influencing everything around them. For Japanese, the environment dominated, interacting with and influencing all the characters.

After the initial test, the researchers offered participants different versions of the fish picture, with some elements changed and some not. With the altered pictures, the Japanese were more likely to notice changes in the scenery or context. The Americans, on the other hand, proved adept at recognizing the large fish wherever they appeared, while the Japanese had more trouble recognizing the fish in new contexts, outside the original environment.

So members of two different cultures--the more individualist Americans and the more collectivist Japanese--"saw" the pictures with differing emphasis on individuals, the environment, and how these elements interacted. The divergent accounts point to differing narratives of what controls what in the world, and how individual people fit into it.

How then might people in the Arab world describe the image? That research hasn't been done. However, since Middle Eastern cultures are generally less individualistic and more collectivist, we can make an educated guess that they would see the picture differently than Americans, probably with more emphasis on environment and context.

Let's return, though, to what we Americans described, and what that might tell us. In the Nisbett and Masuda's study, we distinguished the big fish as the main characters, largely independent of environment. As Americans, our narrative has been one of individuals changing the world through their own actions. This common thread runs from Benjamin Franklin's maxim "God helps those who help themselves" straight to Barack Obama's "Yes we can."

At TED conference, 15 reasons for wonder

Many other cultures take a more holistic approach to personal agency. In perhaps the most famous passage of the Hindu scripture Bhagavad Gita, the god Khrishna tells the hero Arjuna, "You have control only over your actions, never over the fruit of your actions. You should never act for the sake of reward, nor should you succumb to inaction."

Popular expressions from other cultures echo this approach. "Shikata ga nai"--it can't be helped--goes a Japanese saying to mitigate unpleasant circumstances, while the Arabic phrase, "in sha'Allah"-- God willing --signals a similar limit to control for Muslims. The individual isn't powerless in these conceptions, but he or she is just one player in a larger drama of life, not its center.

TED.com: A historic moment in the Arab world

In the last decade, America has tried applying our individualistic narrative to the Middle East. Now, as the people in multiple countries there struggle to take greater control for themselves, we want to see our story play out in their efforts, and we worry that it won't.

Yet even as we set the scene for ourselves, we subtly set our expectations. This recent New York Times article on Libya begins with a lengthy description of main actors--the rebels and their leaders. In contrast, similar stories from non-Western, large-circulation dailies--for example, The Hindu in India, and Sabah in Turkey--begin by laying out broader contexts. The different stories set different conditions for where meaningful action will come from.

Our own culture enters the picture--whether it's one of undersea life or social uprising--at the very moment we understand it. With this in mind, let's be rigorous in trying to comprehend the events in the Middle East, but humble in trying to predict just where they may lead.

The opinions expressed in this commentary are solely those of Sheena Iyengar.