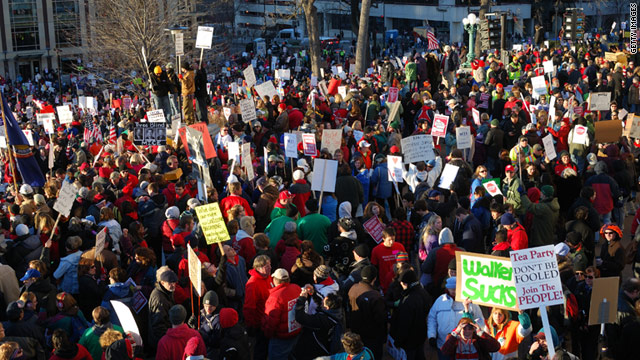 Editor's note: John Avlon is a CNN contributor and senior political columnist for The Daily Beast. He is the author of "Wingnuts: How the Lunatic Fringe Is Hijacking America."

The minority party in the legislature responded with a collective freak-out. Massive populist protests were held, drawing national press attention. A few signs in the crowd compared the newly elected executive to Hitler. Partisan cable TV opinion anchors doubled their duty, drumming up the crowds and then offering "analysis" on air. The language of apocalypse was invoked, the battle lines were drawn -- and domestic politics started to feel a little like a war.

No, this isn't a recap of Washington 2009 after Barack Obama's election, but Wisconsin 2011 after Gov. Scott Walker's election. And if you were offended by one, but cheering the other, you're part of the problem -- an atmosphere of hyperpartisanship in which extremes on both sides of the political spectrum act like wingnuts crying wolf.

States around the nation are wrestling with massive budget deficits -- and most of them stem significantly from public sector pension obligations. Walker campaigned on a commitment to confront the public sector expenses and the voters in traditionally liberal Wisconsin endorsed that agenda.

Democrats found themselves in the minority, so they have embraced the logic of the cowardly knights in "Monty Python and the Holy Grail" -- "Run Away!" A critical mass are now hiding out of state.

Prominent Democrats and liberal opinion hosts like MSNBC's Ed Schultz have tried to make this a national cause even as members of the crowd displayed signs that echoed the ugliest incidents of the Tea Party rallies -- including comparisons of Walker to a Nazi.

Fox News, which chose not to focus on similar signs when they emanated from Tea Party crowds, could not condemn the liberal counterparts fast enough. Some liberals suggested the Nazi references were the work of provocateurs designed to discredit their effort, just like conservatives had before them. The people who used Nazi imagery in both cases can be characterized as outliers, but they cannot be ignored.

Dig below the style and you'll find a serious substantive debate -- how should governors meet the responsibility of balancing their budgets?

Generous labor contracts can create unsustainable debt, negotiated by one generation and paid for by another.
--John P. Avlon

Democratic governors like Andrew Cuomo of New York and Jerry Brown of California are attempting to address pension benefits and health care costs to the extent that it is permissible under their state constitutions. But Walker is taking aim at the underlying problem: collective bargaining and union "check-offs" that create a vicious cycle of taxpayer subsidized partisan politics and labor deals that pass the buck to the next generation.

Liberal icon President Franklin Delano Roosevelt opposed the ability of public sector unions -- government worker unions paid for by taxpayers -- to collectively bargain, saying the negotiators in such cases couldn't bind the decisions of the public through the legislature about how to run government.

Generous labor contracts can create unsustainable debt, negotiated by one generation and paid for by another. That's what we're seeing now, as the United States faces an aging population, with growing numbers of public employees retiring to draw their pensions.

In the intervening decades, the Democratic Party has become politically dependent on the donations from public sector unions. For example, among their largest donors most election cycles are teachers unions -- and that money was essentially recycled taxpayer dollars, filtered through the union via an automatic paycheck deduction and then given to the Democratic Party.

The unions' power, especially in the Democratic primaries, can be understood as equivalent to the social conservatives' disproportionate influence in the Republican primaries -- except that it is better funded, through repurposed taxpayer dollars.

Democrats have so far seen fit to try to make the Wisconsin budget battle a national metaphor for Republican budget cuts to come. But most citizens care more about their own bottom line than the sanctity of sweetheart union deals, especially at a time when towns and families are still struggling to make ends meet.

Renegotiating collective bargaining does not mean Republicans hate teachers -- or cops or firefighters. It means they are trying to meet their obligation to balance the budget while looking out for future generations of citizen taxpayers.

Hyperpartisan tantrums, whether by Republicans or Democrats, are ridiculous and irresponsible. Bills deserve up or down votes. Fear-mongering should be condemned in political debates no matter what side is implicated.

Walker and the Republicans in the Wisconsin State Legislature were elected to deal with big budget deficits in what is often pigeonholed as a liberal state. They are now attempting to do just that -- and they deserve credit for looking at the long-term causes of the budget deficits and attempting to deal with them. All-or-nothing approaches to legislation rarely lead to real progress. There should be room for a constructive compromise between responsible Republicans and Democrats that deals with the big-picture problem while bringing an end to this street-theater stalemate.

Unhinged protests that substitute fear and hate for reason and responsibility deserve to be condemned. So do legislators who abdicate their responsibility by running for the hills.