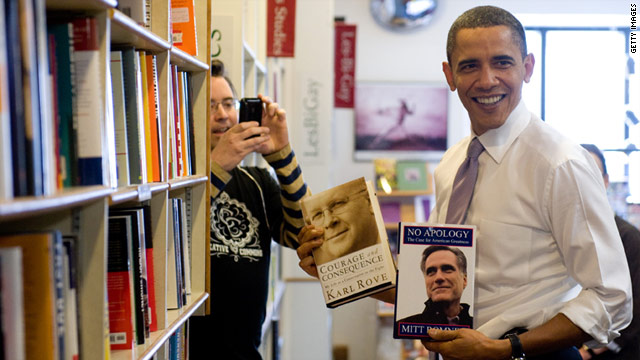 New York (CNN) -- With less than a year to go till the Iowa caucus on February 6, 2012, the conventional wisdom is that President Obama is vulnerable, but there is no Republican who can beat him.

What does a poll like this mean with more than 20 months to go to Election Day? Not much! The hardest thing for pundits like myself and other talking heads is to say "I don't know."

The easiest thing is to argue that a poll says something and that only we who have our heads buried in polls can interpret it. Well nobody knows what you, the electorate, are going to think in the months ahead -- or what events are going to dominate the national and international agenda.

Politics: An early look at the Republican field for 2012

The safest bet is that Obama will be the Democratic nominee. You can go to the bank on that one. And my counsel is to stay away from betting this far in advance on the Republican side. Unless you're privy to divine inspiration, the best thing to do is to watch the process evolve.

One thing that you should know though is there are some extremely competent candidates who I believe will run -- and that whoever wins the GOP nomination will be a formidable opponent for Obama.

Unlike past Republican races, there is no establishment candidate or heir apparent who automatically picks up the mantle. From 1952 until 2008, every Republican presidential ticket -- except 1964, the year of Barry Goldwater -- included a Nixon, a Bush, or a Dole. All were Washington insiders and well-known figures when they ran either for vice president or president.

This time the race is totally open: no front-runners, no sure winners, no sons, daughters or spouses running as of now.

There are two brackets of potential candidates. The first is mostly made up of the survivors of the 2008 race. Former Govs. Huckabee and Romney were the two runner-ups to John McCain in 2008 and Sarah Palin, who was plucked from the obscurity of the Alaska governorship to be McCain's running mate, became an overnight sensation. Huckabee got the most delegates except for McCain and won the Iowa caucuses and several Southern state primaries.

Romney got the most popular votes except for McCain and won his home state of Massachusetts, Michigan -- the state where his father was governor in the 60's and where he grew up -- and Utah, the home of his Mormon religion.

The Palin story needs no retelling here. Most people think that if she were the GOP nominee, Obama would win.

These three lead all polls, and have the highest name recognition, without any one of them being a clear-cut favorite.

One thing we can say with certainty is that leading in the polls is no guarantee of victory.
--Ed Rollins

The other candidate in the top bracket is former House Speaker Newt Gingrich. He is behind the other three in the polls, but probably has the best political organization, issue think tank, and fundraising capacity as of today.

Romney has not stopped running since 2008 and tends to have the most establishment support in the party. That may not mean as much in the era of the Tea Party movement, but he will have a formidable organization. He raised and spent more money in 2008 -- $104 million in the primaries, including $44 million of his own wealth -- than any other Republican candidate. He may not put in that much of his own money this time around, but he is a proven fundraiser.

Palin and Huckabee are the unknowns. No one knows whether they are running (I was Huckabee's 2008 chairman and I don't know). If they do, both have the ability to put together serious presidential campaigns that will have appeal to both the religious right and the Tea Party.

The second tier of candidates is composed of some extremely talented present and former governors. Any one of them could break out and emerge as a serious competitor for the nomination. The list of potentials (none have yet announced) are Mitch Daniels of Indiana, Haley Barbour of Mississippi, Tim Pawlenty of Minnesota, George Pataki of New York and the Jon Huntsman of Utah, President Obama's ambassador to China. Several strong potential candidates -- Jeb Bush, Chris Christie, Rick Perry and Bobby Jindal -- have said they have no interest in running in 2012.

The only serious Washington players being mentioned are Sen. John Thune of South Dakota and Congressman Ron Paul. Paul ran in 2008, and even though not a viable candidate, he had enthusiastic crowds. As a leader of the Tea Party movement he will have them again.

If there is a third tier, it would include former Sen. Rick Santorum of Pennsylvania, who was defeated for re-election in 2006, and Congresswoman Michele Bachman of Minnesota. Both will have great difficulty being considered serious candidates over the long run.

All of the serious candidates will be tested quickly. The first test is raising money and putting an organization together.

The first test with voters is the Iowa straw poll in August.

But just as important are the many debates that will give exposure to some of the lesser-known candidates.

One thing we can say with certainty is that leading in the polls is no guarantee of victory. Four years ago, Rudy Giuliani was leading in nearly every state and national poll. He didn't win a delegate and ended up running nearly dead last among the serious candidates, getting less than 3% of the primary vote.

The other man who was labeled a "front-runner" when he entered the race was Fred Thompson. He also ended up without a delegate or a win anywhere and ran dead last with 1.4% of the vote.

And then of course we have the story of our president. Certainly he was never viewed as a serious threat until he won Iowa.

One of the great things about American politics is that the early primaries and Iowa caucus are retail politics. Voters want to meet you, shake your hand and look you in the eye and hear what you're all about. They take their politics very seriously. They have seen many presidential contenders -- and they aren't intimated by any of them.

A year from now we will know the winner of the Iowa caucus, who will be a front-runner at least until the New Hampshire and South Carolina primaries. If someone wins two out of those first three, he or she will be on their way to being the nominee. And before it's over, we will know whether the Republicans will have a candidate who is up to the task of defeating Obama.