By Ed Husain, Special to CNN 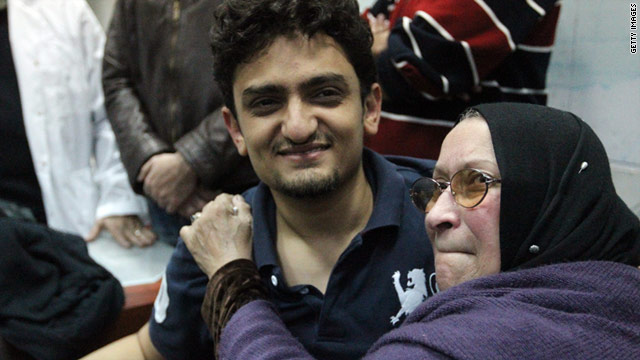 Just out of jail, Wael Ghonim is embraced by the mother of Khalid Said, who was allegedly beaten to death by police.
STORY HIGHLIGHTS

Editor's note: Ed Husain is a senior fellow at The Council on Foreign Relations and author of "The Islamist."

(CNN) -- Wael Ghonim is a symbol of the revolution in Egypt.

During his highly emotive interview on a popular Egyptian show Monday night, he went out of his way to rebut the accusations made by the older generation of Mubarak's supporters that the protesters were "traitors to Egypt" and "foreign agents." These accusations were not only repeated on state media, but when Ghonim was arrested on January 28 and spent 12 nights in a Cairo prison, his fellow inmates accused him of the worst possible cultural and political trait for an Arab: khiyanah, or betrayal.

With foreign media presence and international support for the protesters, that accusation of treachery to Egypt and foreign involvement was gaining credence in many quarters in Egypt last week. Morale was slowly dropping. Then came Ghonim's explosive interview Monday night.

With one stroke, he galvanized an entire generation of Egyptians. His story is sincere and selfless: The regime's treatment of him was why millions opposed the Mubarak government. If Egyptians had forgotten, Ghonim's plight reminded them. With passion and intellectual clarity, he asked why he was arrested. Why were his frail parents not informed? His parents had wandered from hospital to hospital crying -- why hadn't police simply told them that he was in prison, and not dead?

The face of Egypt's revolution

The widespread culture of democracy activists disappearing -- or worse, being tortured and killed -- had inspired Ghonim to create a Facebook page in memory of Khalid Said, who was beaten to death by police. That page was instrumental in mobilizing a younger generation of Arabs to the January 25 protest meetings.

Ghonim's interview was cataclysmic because he was candid: He has a job abroad in the Emirates, he lives comfortably in a villa, and he has nothing personal to gain from the dangers he and his wealthy friends put themselves in. Their sacrifice was for the country and people they loved: Egypt and Egyptians. This was not treachery, but sacrifice.

Ghonim's clarity provided an emotional uplift to the protesters and their supporters. He spoke about the dreams of ordinary Egyptians to live in freedom, and he struck a popular chord when he divulged that for 12 nights in prison, he sang "Dream with Me," a popular Egyptian song by Hamza Namireh, another young Arab of the revolution who, eyewitnesses tell me, has been singing in Tahrir Square this week.

Where others would have relished the media attention, Ghonim's piety and modesty shone as he paid tribute to the martyrs and heroes who were on the cold streets night after night. He had slept in prison, he said, and so he was not a hero.

It is these sentiments and experiences -- the ability to dream and sing in adversity -- that resonate today in Egypt. Ghonim exemplifies an entire generation of patriotic, educated young Egyptians. But for all his strengths, he is not likely to become Egypt's next president, a demand made by his many followers on a 200,000-strong Facebook page.

Revolutions do not produce certainty. The short term in Egypt will be unpredictable, and the successor to Mubarak is unknown. It would be wrong for us in the West to express preferences, or groom leaders. The last two weeks of protests in Egypt have been organic, and led by a coalition of people from tattooed freedom lovers to government-trained clerics. This broad alliance will produce its own leaders when the country goes to the polls in September. In a true democracy, the result of the ballot is unknown until the papers are counted.

Ghonim and his supporters want that free and democratic Egypt. Ghonim may wish to be a candidate, or he may not. But it is too soon to want to centralize a mass movement by imposing a figurehead on what is a broad coalition. This is an Egyptian uprising, so let Egypt decide its fate through free and fair elections.

The opinions expressed in the commentary are solely those of Ed Husain.