Should top U.S. goal be democracy? 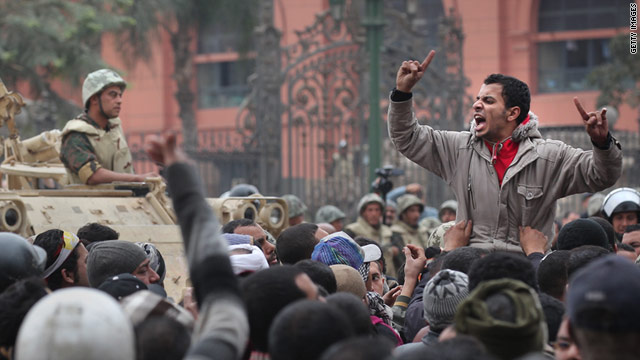 An anti-government protester chants and gestures in front of soldiers guarding the Egyptian Museum in Tahrir Square.
STORY HIGHLIGHTS

Princeton, New Jersey (CNN) -- When the Egyptian people took to the streets of Cairo to protest the oppressive government of President Hosni Mubarak, they instantly challenged one of the most powerful strains of U.S. foreign policy thinking.

In American diplomatic circles, the "realists" have long argued that the U.S. must be primarily focused on national self-interest, rather than concentrating on trying to promote democracy and human rights in other countries.

They object to the style of idealism promoted by President Woodrow Wilson, who envisioned that war and diplomacy could transform international relations by institutionalizing cooperation among nations, allowing for the self-determination of people and ending war for all time.

In The New York Times, former Secretary of State Henry Kissinger -- one of the most famous proponents of realism -- wrote that his approach to foreign policy respected the importance of values but insisted "on a careful, even unsentimental, weighing of the balance of material forces." By contrast, he wrote, trying to promote idealism in foreign policy "translates it into a call for crusades on behalf of regime change."

One of the classic formulations of these ideas was penned by Georgetown professor -- and future Reagan adviser and U.N. ambassador -- Jeane Kirkpatrick in 1979. In her article, "Dictatorships and Double Standards," Kirkpatrick argued that often the U.S. could not be on the side of democracy if it meant supporting governments that would be hostile to U.S. interests.

She criticized President Jimmy Carter for being hostile to autocratic governments that were willing to work with the U.S. against communism. Kirkpatrick rejected the idea that it was possible to democratize countries in all circumstances.

Nowhere has the power of realism been stronger than in U.S. Middle East policy. For many decades the U.S. has supported Arab governments whose behavior fundamentally contradicts democratic ideals. U.S. policymakers concluded that there were no other options.

It is impossible, they said, for democracy to take root in the Middle East given the history of the region. To protect strategic interests such as access to oil, they felt it essential to make peace with bad rulers.

Realism has been challenged on the left and the right. During the 1970s, the human rights movement pushed the U.S. to embrace the political and civil rights of others as a legitimate claim in U.S. foreign policy.

Some neoconservatives, such as Washington Sen. Henry "Scoop" Jackson, claimed that the U.S. needed to insist the Soviet Union provide basic human rights, such as allowing Soviet Jews to leave the country.

Carter institutionalized these concerns with new policies in the State Department, and Ronald Reagan rejected the realism of Presidents Richard Nixon and Gerald Ford. He argued that there could be no accommodation with the Soviet Union and believed that ultimately communism would fall.

Although Reagan ended up pursuing his goal through arms negotiation -- which went against many of his arguments -- the collapse of the Soviet Union that began during his presidency and culminated in 1991 seemed to give legitimacy to the arguments that promoting democracy is a valid goal for the U.S.

The loudest push for idealism was heard from President George W. Bush's administration. The Bush Doctrine, announced in 2002, included a commitment to promote "freedom" and the "development of democratic institutions." Bush argued that the removal of Saddam Hussein in Iraq offered the opportunity to create a bastion of democracy in the Middle East that would spread the ideal to other countries.

Last week, the neoconservative Elliot Abrams argued in The Washington Post that events in Egypt showed that Bush was correct. "Arab nations too," Abrams wrote, "yearn to throw off the secret police, to read the newspaper that the Ministry of Information has not censored and to vote in free elections."

But Bush's legacy created as many problems for idealists as it did sources of support. After all, Iraq remains unstable, and the future of civil society there is unclear. Bush tried to impose democracy from above and did not invest sufficient resources to remake the country. Many conservatives claimed that Bush had gone too far. Liberals agreed.

President Obama, who had been idealistic in many ways on foreign policy, drew back from Bush's rhetoric about democracy and fell more in line with the realists. The administration cut the funding for several programs aimed at promoting democracy and civil society in Egypt.

The realists have been highly skeptical about Egypt. They warn that revolution in Egypt could open the door to Islamic fundamentalism, as in Iran in 1979, and cost the U.S. and Israel one of their most loyal allies.

Should the Egyptians be able to withstand the response of the Mubarak government and be able to establish a truly democratic and secular government, the results would be dramatic. These turbulent weeks could be remembered in the same way the nation remembers the late 1980s and early 1990s, when conditions that seemed inevitable in the Soviet empire suddenly were not.

However, if Mubarak stifles the revolution, or fundamentalism takes hold, realists will, for a long time, point to Egypt as the prime example of why we cannot hope for much better than the status quo when it comes to the Middle East.