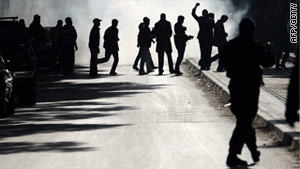 Corruption has been one of the main features of the Ben Ali regime in Tunisia. It has gone hand in hand with authoritarian control of the state. Opposition groups and the public often spoke of endemic corruption among the Tunisian ruling elite.

However, the revelations made by WikiLeaks that in June 2008 the U.S. embassy in Tunis said that "Whether it's cash, services, land, property, or yes, even your yacht, President [Zine el Abidine] Ben Ali's family is rumored to covet it and reportedly gets what it wants," gave even greater weight and proof to an already widespread belief that Ben Ali and his wife's family, the Trabelsis, were the "quasi-mafia" often referred to by Tunisians. It added to the long list of grievances against a regime that had been in power for 23 years and had remained unaccountable.

What are the Tunisian protests about?

Al Bouazizi: The fruit seller who sparked a revolution

With the political and security apparatus under their control, the regime was able to exploit the economic system and the financial sector to enrich themselves.

The Ben Ali clan had a hand in every aspect of the new economy, be it duties on imports and exports, media, internet providers, telecoms, banks, shopping centers or property development.

According to WikiLeaks, prime real estate was reportedly expropriated from its owner by the government for use by the water authority, then later granted to Mohamed Sakher El Materi -- Ben Ali's son-in-law -- for private use.

The cables reported: "With real estate development booming and land prices on the rise, owning property or land in the right location can either be a windfall or a one-way ticket to expropriation."

Privatizations offered a valuable channel. Members of the family would buy at a symbolic price and then sell to entrepreneurs at massive profits. They acquired commissions in foreign investments and were often the go-betweens in the award of public contracts. The leaked U.S. embassy cables cited that: "Lax oversight makes the banking sector an excellent target of opportunity, with multiple stories of 'First Family' schemes."

Anyone doing business in Tunisia, be they local or foreigner, would have been aware of the power and control of the Ben Alis, the Trabelsis and the coteries of power that surrounded them. However, the WikiLeaks revelations added to the "disgust" that many Tunisians had already been feeling at the chasm in wealth prevalent in Tunisian society, a country where unemployment runs at 30%.

The widespread protests that erupted were due to economic pressures and corruption, but they were also against a political system that abused human rights and showed no respect for the rule of law.

A new generation of Tunisians, connected to the internet and using Twitter

, was galvanized to action against a repressive police force and security services. Today's technology provided them with channels that despite their government's restrictions, proved invaluable in spreading information and support for the protests, while WikiLeaks merely further exposed an already discredited and reviled regime.

Others in the region share the same long brewing discontent. The question now in the minds of many is whether the 50-year-old Egyptian who shouted anti-government slogans in front of the Egyptian parliament before setting himself on fire on Monday, and the four Algerians who have done so over the last few days, echoing the action of Muhammad Al Bouazizi, the young Tunisian who set himself on fire and died in mid-December, will help set in motion a similar chain of events.

The opinions expressed in this commentary are solely those of Maha Azzam.