By Sarah Brady, Special to CNN 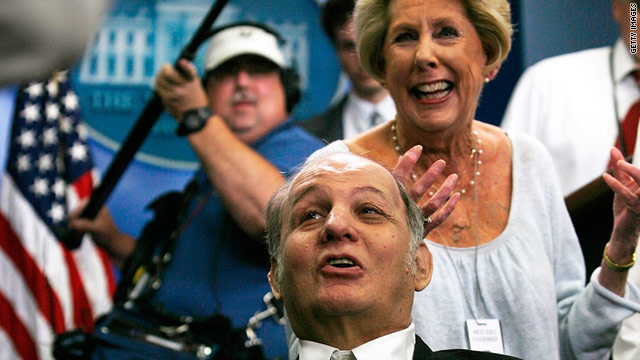 Sarah Brady's husband, Jim, was shot in the head during an attempt to assassinate President Ronald Reagan in 1981.
STORY HIGHLIGHTS

Editor's note: Sarah Brady is the chair of the Brady Campaign to Prevent Gun Violence, and the author of "A Good Fight," which tells how she worked for the passage of the Brady Bill, which, for the first time, mandated a waiting period and background checks for the purchase of handguns. She is the wife of Jim Brady, the former White House press secretary who was shot and injured in the 1981 assassination attempt on President Ronald Reagan.

She is one of the most prominent politicians in her state.

Jim worked for the most powerful political leader in the world.

She was shot in the head. So was Jim.

She initially was declared dead. So was Jim.

She is beloved. So is Jim.

A man who most people knew wasn't mentally stable easily got a gun and shattered her life.

The doctors, the nurses, the hospitals; the prayers, the tears, the anger; the fears, the doubts, the nagging sense of helplessness.

Our family has been through it all. Her family will go through it, too. Thirty years later, and it's all too familiar.
--Sarah Brady

The sweet surprises of good news, small miracles and the irresistible surge of hopefulness; the friends, the family, the strangers; the guardian angels.

Our family has been through it all. Her family will go through it, too.

Thirty years later, and it's all so familiar.

Not just the physical, mental and spiritual ordeal of being shot and taking those first initial steps on the long road to something the doctors call "recovery." But the noisy, and necessary, debates about how, why and what, if anything, we can do to make this kind of pain and trauma less likely for more of our fellow Americans.

Sitting in our living room January 8, unable to take our eyes off the television, we wept for Gabby Giffords and all the others, and we remembered.

Our tears now have dried, as will one day Gabby's and those of the other families. We hope that when the trauma subsides, they will consider what the tragedy led us to do next. We can and must do more to prevent gun violence.

The bullies have succeeded too often. They have made cowardly lions out of too many members of Congress.
--Sarah Brady

We feel it's our duty, and we're asking President Barack Obama to help lead the way. As he so eloquently put it in his remarks at the memorial service in Tucson, Arizona, if we want our democracy to be as good as Christina Taylor Green and other children imagine it, we have to be able to come to that proverbial table of brotherhood and work on solutions to gun violence.

He is the only political leader who has the capital, the conscience and the competence to gather us. On Thursday, press secretary Robert Gibbs affirmed the president's commitment to banning assault weapons, and with them those high-capacity-killing magazines.

An ideology ... has pistol-whipped us into a seemingly endless cycle of wounding, maiming and murdering one another.
--Sarah Brady

Obama is our best hope, because he is surely aware that much of the resistance to common-sense changes to our gun laws is meant to shut us down and shut us up. It is meant to allow the guys with the guns -- instead of ordinary Americans like us with the ideas -- and men and women of good conscience, like Gabby and Jim -- to make the rules.

The bullies have succeeded too often. They have made cowardly lions out of too many members of Congress. This moment, as grievous as it is, presents a new opportunity for the president and other elected leaders to demonstrate political courage -- the way President Bill Clinton did when he stood by the side of victims and fought with all he had to pass the Brady Bill.

For another view, read Robert Levy on gun control

I implore our president and our Congress: Take a risk. Re-direct your moral compass. Plow new ground in your consciousness. Say "no" to those who won't retreat from an ideology that is fixated on weapons of war that are turned on babies and grandmothers alike. An ideology that helps assassinate dreamers and the dreams they hold dear. That litters across our fruited plains the bloodstains of innocents. That has kept us from forming that more perfect union, and pistol-whipped us into a seemingly endless cycle of wounding, maiming and murdering one another.

An ideology that rarely has discovered a call for a common-sense regulation that it could embrace.

Obama has encouraged us to engage in a debate that is worthy of those we lost.

I could not agree more, Mr. President.

The Americans we have lost to gun violence now number more than we lost in all the wars of the 20th century.

We Americans can do better. We must. With you leading us to a new tomorrow, I am confident, we will.

The opinions in this commentary are solely those of Sarah Brady.