Did Obama rise to the moment? 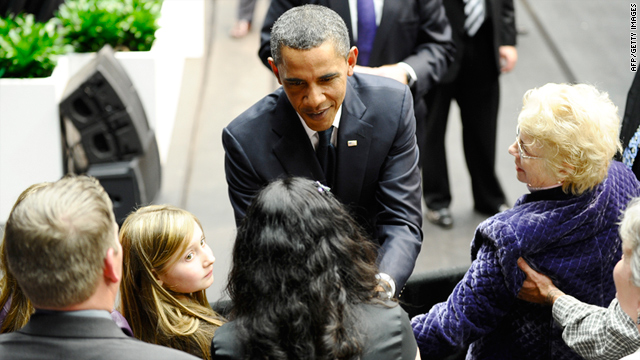 (CNN) -- My friends at CNN have asked for a few reflections about the president's speech Wednesday night in Tucson.

These are really just jottings, and they are a bit disconnected, partly because the hour is late, partly because I experienced the events of the evening as somewhat disjointed.

• Like many others tuning in from afar, I had anticipated that we would witness a solemn service commemorating the dead and wounded from a tragedy. It was jarring to find that instead, we were watching something more akin to a pep rally, even a campaign-style rally. It took me a long while to settle in to the rhythm of the evening.

• Afterward, John King, on the scene for CNN, reported that he had been in Tucson for several days, witnessing the grieving and hurt and felt that people there needed a chance to cheer. That was comforting. None of us who live outside Tucson can fully appreciate what they have been through -- if they needed a catharsis, so be it.

• Once one got beyond the atmospherics of the evening, you could begin to focus on the content of President Barack Obama's speech. His central message focused on what has happened since the shootings -- the bickering that has broken out as liberals have charged that the rampage grew out of a rancid political culture created by conservatives and conservatives countering that there was no evidence of such a linkage and that the culture, such as it is, went bad during the George W. Bush era and has grown worse because Democratic mal-governance has sparked a citizen revolt. Obama said that in the aftermath of the shootings, we should speak to each other in ways that heal, not wound. Obama is right and deserves to be taken seriously. (One could also argue that implicitly he was telling his liberal base to cool off.)

Without follow-up, the effect of Wednesday night's speech will fade rapidly as the politicians return to the wars in Washington.
--David Gergen

• Yet I also wonder where his speech leads. It was very good for the moment, but will it have a life beyond the moment? I am not so sure, unless -- as I hope -- he continues to pursue some of the underlying issues that surround these heinous shootings. We have allowed a culture of violence to grow up in this country: too much hate, too many guns, too many killings. My hope is that he will create a broader, nonpartisan effort to change the culture. Without follow-up, the effect of Wednesday night's speech will fade rapidly as the politicians return to the wars in Washington.

• Some of the president's fans were delighted that in the rallylike atmosphere, Obama seemed to find his old voice from the campaign trail. They were heartened that he aroused the audience again and again. From my perspective -- a traditionalist at heart -- that was what I found off-putting. To me, the focus of the evening should not have been upon Obama -- how well or how badly he performed -- but upon our remembrance of those who lost their lives or were grievously wounded. I wanted something more to chew on than whether Obama had found his voice again. It will be interesting to see how others respond.

• The most glorious part of the evening was hearing the president electrify the crowd with his report that the wounded congresswoman, Gabrielle Giffords, had opened her eyes earlier and then to hear three women from Congress relate to Anderson Cooper how they had been present in her hospital room to see the miracle before their very eyes. How could one not be moved? Gabby, as we all know her today, has become a uniting figure for the nation.

• All in all, it was a fascinating evening. Many turned off their television sets with elation. Others had much more mixed views. But what matters now is whether we can find ways to create a more civil and decent society, as the president urges. Whatever one thought of Wednesday night, our work begins anew today.