By Julie Schindall, Special to CNN 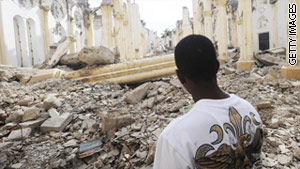 A year after an earthquake devastated Haiti, reconstruction has barely begun.
STORY HIGHLIGHTS

Editor's note: Julie Schindall is the spokeswoman for Oxfam, a humanitarian aid organization, and a former reporter and editor for National Public Radio.

Port-au-Prince, Haiti (CNN) -- I've worked in Port-au-Prince for nearly a year, but yesterday was the first time I've seen large-scale rubble removal in this collapsed city. As I stood next to the owner of a house that had been finally demolished and watched the remains being carted away by massive earth-moving machines, I felt thrilled -- but frustrated, too.

One year on from the Haiti earthquake, reconstruction has barely begun. For me; for everybody around the world who gave generously; for aid agencies like my own, Oxfam; and, most important, for Haitians, this lack of progress is deeply disappointing.

The facts of Haiti before the quake are well-known: Haiti is the poorest country in the Western Hemisphere; it has a notoriously weak and corrupt government; only half of the people have access to clean water.

Port-au-Prince was so overcrowded and filthy before the quake that people joked about razing it to make a new and better capital. And when that in fact happened -- in one of the worst tragedies of the past years -- famously resilient Haitians said that maybe their country could now be built into someplace better and fairer and safer.

After the quake, a massive emergency aid response saved millions of lives in Haiti, bringing essential food, water and medical care. Although terribly damaged, the government tried its best to facilitate the emergency response.

Haiti: Hope emerges from the rubble

But now we're in the tough part: the recovery. Oxfam has called 2010 in Haiti "a year of indecision" and blamed the lack of progress on reconstruction on "a crippling combination of Haitian government indecision, rich donor countries' too frequent pursuit of their own aid priorities, and a lackluster Interim Haiti Recovery Commission, which was established to coordinate reconstruction efforts and build state capacity."

Simply put, we know how to do emergency response after a natural disaster: fly in tons of medical equipment, water purification materials, tarps, food; work around the clock in triage mode; keep peoples' hearts beating.

One year on, however, it's not so straightforward. Real recovery from the Haiti earthquake is about changing the system: making the government more capable of doing its job, stopping corruption, making donors follow through on their promises and stop promoting their own agendas, forcing aid agencies to be better coordinated and give Haitians the skills to carry out projects themselves.

What Haiti needs now is leadership from its sovereign government. But at the moment, Haitians don't even know who will be in that government, given the disputed election results from November. No decision has been made on the runoff that could resolve the leadership question, but resolving it is crucial.

Without a legitimate leadership in place -- a mandate from Haitians -- it will be very difficult to implement reconstruction, as only the government has the legal right to do so.

But the government has long been seen as very weak, so in addition to a mandate from the people, Haiti's officials and technicians will need support from the international community -- particularly donors from rich countries who made big pledges at March's U.N. donor conference in New York -- to carry out their jobs.

The Interim Haiti Recovery Commission, established in April, has an essential role. It's charged with helping coordinate major reconstruction projects and aiding the Haitian government with building its accountability and capacity to get things done, free from corruption. Yet nine months into its term, the commission, under the leadership of former President Bill Clinton and Haitian Prime Minister Jean-Max Bellerive, has failed to do this.

Donors' efforts are fragmented. Each is acting according to its own agenda. Each comes in with its own strategy: for example, on job creation or a slew of other recovery objectives. Donors hold the purse strings for Haiti to rebuild, and they must give priority to projects that dovetail with Haitians' needs. In a March survey by Oxfam of 1,700 Haitians, people listed their priority needs as jobs, homes and education.

Only when the government, with donor support, makes key decisions on job creation, rubble removal and resettlement can it move from the Band-Aid of emergency aid toward long-term, sustainable solutions for Haiti.

At times, the massive challenges ahead may seem too great, and it may seem easier for those of us with comfortable lives in rich countries to leave Haiti to its historical dysfunction.

But for 9 million Haitians, these massive challenges are their daily lives. They do not have a choice but to get up every day and try to survive. We must support them. For the leaders of Haiti, donors, aid agencies and Haitians themselves, the time to act is now. Recovery from the earthquake must begin. Haitians cannot wait any longer.

The opinions expressed in this commentary are solely those of Julie Schindall.