Why does it take tragedy to unify us? 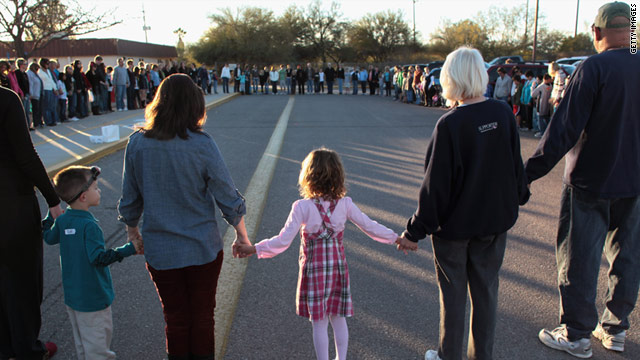 Rachel Crabb, 5, holds hands with teachers and parents during moment of silence for her schoolmate Christina Green in Tucson.
STORY HIGHLIGHTS

Editor's note: CNN Contributor Bob Greene is a best-selling author whose books include "Late Edition: A Love Story" and "Once Upon a Town: The Miracle of the North Platte Canteen."

(CNN) -- Why does it always seem to take something like this to move us, however briefly, toward civility and mutual understanding?

Why is it usually in the worst of times that we step back, lower our voices and look for our common humanity?

The carnage in Arizona has stopped America in its tracks. We who disagree on politics and policy are not each other's enemies. We should have known that all along. Yet for whatever reason, it takes the darkest national moments for us to share a collective deep breath and question the way we have been talking to each other and treating each other.

Think back to September 11, 2001-- to one moment in particular. Maybe you've forgotten it.

The tone of Obama's Tucson speech

Members of Congress from both political parties -- men and women accustomed to arguing bitterly with each other, questioning each other's motives and undercutting each other's efforts -- stood shoulder to shoulder and sang. They lifted their voices, and all of those voices blended together as they sang "God Bless America."

For a brief moment it seemed that things might be on the verge of changing. That pettiness and smallness and rote vindictiveness might be put aside for the common good.

Not that everyone in the Congress, or everyone in the nation, would suddenly agree on every political matter. That will never happen, and it wouldn't be healthy if it did. But on that terrible day, we were jarred into recalling that we are one nation, and that the many fine and strong things that bind us should far outweigh the tiny things over which we tend to bark at each other.

The feelings of fellowship that were on display on the steps of the Capitol late on that September day were not to endure. The members of Congress who represent us went back to the old ways, as did most of the rest of us.

Why is it that only in the bad times do we recognize how much we depend on each other? This week there have been, in the Congress and beyond, many voices of uncommon understanding and compassion that have risen since the shots rang out at the Arizona grocery store. A consensus seems to be forming: We can do better.

It would be a shame if we were to forget that. Phil Jackson, the enormously successful basketball coach, has a theory that he likes to talk about both in public, and in quiet private conversations. He has made himself something of a student of the philosophies of the world, some of them modern, some of them ancient. One of them stands out enough that he chooses to verbalize it at certain times.

Rather, Jackson says, we should look at the glass and imagine that it is already broken.

Why is it that only in the bad times do we recognize how much we depend on each other?
--Bob Greene
RELATED TOPICS

If we imagine the glass -- if we imagine life -- as being shattered before it really is, then we can remind ourselves to regard it as precious and to treat it with care and tenderness.

In the weeks and months that will follow the killings in Arizona, we will go back to our unremitting acrimony if history is any indication. When that happens -- when the national discourse turns consistently ugly and harsh again -- we would do well to recall these January days when the glass was smashed into pieces. And how, in our anguish, we reached for the best in ourselves and tried to recognize the best in others.

One of the most controversial and divisive figures in American political history once said something that, regardless of what you thought of him, should echo today. Richard Nixon, in his first inaugural address, said:

"To lower our voices would be a simple thing. In these difficult years, America has suffered from a fever of words ... from angry rhetoric that fans discontents into hatreds, from bombastic rhetoric that postures instead of persuading. We cannot learn from one another until we stop shouting at one another -- until we speak quietly enough so that our words can be heard as well as our voices."

If any good at all is to come from the heartbreak in Arizona, we'll remember to listen to each other, even and especially when we are predisposed to disagree. And, amid our lowered voices, to learn.

The opinions expressed in this column are solely those of Bob Greene.