Is college athletics a sweatshop? 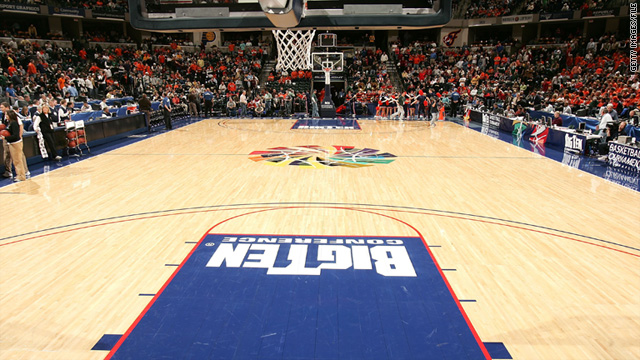 A view of the court where Purdue played Illinois for the Big Ten Men's Basketball Tournament March 14, 2009 in Indianapolis.
STORY HIGHLIGHTS
RELATED TOPICS

Editor's note: CNN contributor Bob Greene is a best-selling author whose books include "Late Edition: A Love Story" and "When We Get to Surf City: A Journey Through America in Pursuit of Rock and Roll, Friendship, and Dreams."

(CNN) -- On Monday night, with millions of fans watching every play, Auburn will take on Oregon for the national championship of college football.

If you're viewing at home, you may notice the same thing you can observe each season at every massive college football stadium or glistening big-time college basketball arena:

Everyone working in the place is being paid: the hot dog vendors, the television broadcasters, the guy peddling game-day programs, the person who manufactured the university-logo jerseys and caps that are for sale at the souvenir stands, the employees changing lightbulbs in the tunnels. ...

(Yes, most if not all of them are the recipients of university scholarships. We'll get to that in a few moments.)

In the days leading up to Monday's national championship game I got in touch with a person who I thought might have a special perspective on the festivities:

"The NCAA is a virtual athletic sweatshop," he said.

There have long been arguments over whether college athletes should be paid for what they do. Those who oppose the prospect say that a free education at a good university, and the joy and acclaim that come from playing college sports, ought to be reward enough. Those who favor it say that college athletics are a multibillion-dollar industry, and that in no other business so large and prosperous are the laborers most essential to the product expected to toil without a paycheck. Many people -- and I'm one of them -- can see valid points on both sides.

There are various and conflicting reports on exactly how much money college sports brings in. The NCAA, on its website, says: "Overall annual revenue for college athletics programs is estimated at around $10.6 billion."

I figured that a $10.6 billion industry might be one that has not escaped the attention of America's labor leaders, which is why I made the call to the top man in the United Steelworkers union. Gerard said that he has, indeed, given long thought to the college athletes' place in the U.S. workforce. And, while not taking an official position on whether they should collect regular paychecks, he came close enough by saying what he believes should be accepted as a matter of fairness:

Gerard said that for years, "the NCAA has simply played the collegiate athletes like they were fiddles." He said that the big universities and the big broadcast networks are "making money off the backs of these athletes." And to those who argue that there is not enough money coming in to pay the athletes, and that to do so would result in both the athletic departments and the broader universities having to cut back on programs and services, he said:

"If you had collective bargaining rights, there would have to be economic disclosures."

Meaning that if the college athletes were represented by a union, or a union-like entity, the universities would have to open their books to the negotiators.

It turns out that the United Steelworkers union is an enthusiastic supporter of, and adviser to, an organization called the National College Players Association, which was founded by a former UCLA linebacker, Ramogi Huma. Huma said that the group, based in Riverside, California, is dedicated to protecting the rights and interests of current and former college athletes.

He said that the so-called "free ride"-- the popular term for athletic scholarships -- usually doesn't pay for an athlete's day-to-day living expenses, which some college athletes struggle to meet. And he said that what the universities call scholarships are in fact salaries, but salaries that relieve the universities of important obligations: "They don't have to pay payroll taxes or workers' compensation for the athletes." He said that, unlike workers who have collective bargaining rights, athletes can lose their jobs -- their scholarships -- for just about any reason.

He is well aware that many people don't have much sympathy for athletes in the glamorous big-time programs. And indeed, there is something that seems inherently unjust about the student who works hard at science or math starting in elementary school because he or she has been told that such diligence is what is important to the country's future strength, and who is noticed or recruited by no colleges, while the ones who are skilled at throwing a football or shooting a basketball are treated like young kings. That has long been the way of the world.

Yet Huma believes that "the growing disparity in the (money for the universities) that the athletes generate, and what they receive," is reason for a rational discussion about a compensation system being put in place. He thinks that actual paychecks for playing the games would be "a huge uphill battle." But what would be wrong, he asks, if college athletes were allowed to be paid royalties for endorsements, and get free-market value for, say, sales of jerseys with their names and numbers on them?

None of this may ever happen. Athletes enter college and are replaced by other athletes every four years. The glory is a blur. And the concept of the purity of amateurism, however tarnished it may have become, is still powerful in America. But beliefs change; the Olympic Games, for example, were once considered the province of athletes who were not allowed to take a cent for their skills, yet think of the recent Olympic basketball teams, which have resembled NBA All-Star squads, or the ice hockey teams, stocked with NHL skaters. Millionaires are more than welcome in the Olympics today.

So will college athletes ever become out-and-out professionals? Will players like the ones in Monday's national championship game ever openly share in the millions of dollars the game will bring in?

There are only three ways that could happen, Huma said: through new laws, through the courts or through the universities deciding to do it voluntarily.

"And you know one thing for sure," he said. "They're never going to do it voluntarily."