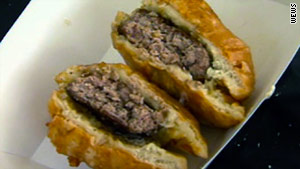 If you are counting calories, you may want to stay away from the deep-fried cheeseburger.
STORY HIGHLIGHTS
RELATED TOPICS

(CNN) -- Step aside Iowa and fried butter -- there is a new national fried treasure to feast upon.

The country's first deep-fried cheeseburger is making its debut among at least 30 other varieties of hamburgers served by 15 different vendors at the National Hamburger Festival in Akron, Ohio, this weekend.

"We cook the cheeseburger, put it on a bun and dip it in batter before dropping it in a deep fryer," said Drew Cerza, the festival's founder.

Cerza came up with the idea for a deep-fried burger alongside a chef at a local burger restaurant. He wanted to combine two of his favorite things -- hamburgers and chicken wings. Cerza said the special batter is a cross between funnel-cake batter and pancake batter, making the deep-fried cheeseburger both sweet and savory.

"We'll serve it with a side of Lipitor," Cerza said with a laugh.

The Hamburger Festival started six years ago in Akron, one of at least four places that claim to be the birthplace of the burger. Local lore has it that in 1885, Akron natives Frank and Charles Menches created the sandwich after they ran out of pork and were forced to use ground beef while serving concessions at the Buffalo Fair.

Recognizing the controversy surrounding the burger's birthplace, Cerza staged "Hamburger Hearings," during the festival's first year and allowed each of the four cities, Seymour, Wisconsin; Athens, Texas; and New Haven, Connecticut, to send representatives to make their case to a "burger commission."

After deliberations, the jury was hung and an online poll had to be taken, naming Seymour, Wisconsin, the home of the hamburger by popular vote.

"We had a lot of fun with it," Cerza said, "Everyone is very proud of their influence on the hamburger."

Still, he says, with hamburger chains White Castle and Wendy's beginning in the state, it's tough to deny that "Ohio is a hamburger state."

The festival is expected to attract 20,000 people over the weekend. Most visitors are regional, but Cerza said the universal appeal of the hamburger has prompted road trips from all over the country.

"This festival is America," Cerza said. "It includes all demographics of everybody, just like the hamburger."

This year's two-day festival includes live performances from a Jimmy Buffett cover band, a beauty pageant and, likely the messiest event of the weekend, bobbing for burgers in a pool full of ketchup.

Cerza came up with the "bobbing for burgers," event after a trip to Wal-Mart.

"I saw kiddie pools on sale, and ketchup one row over," Cerza said. "The idea just sort of came to me."

For the third year in a row, Christy Sinko took home the title, retrieving 26 foam hamburgers from the ketchup filled kiddie pool.

Sinko, a second grade teacher from Medina, Ohio, said her prize is a year's worth of "bragging rights," but Cerza said his contest proves that, "people will do anything for a free T-shirt."

While Sinko said there isn't a whole lot she does to prepare for the bobbing for burgers event, she says, "the key to winning is not being afraid to get dirty."

Also a winner at this year's festival was Akron firefighter Matt Askea, who won the hamburger eating contest, finishing off one Menches quarter pounder (with a bun) and 10 patties in five minutes.