A knack for finding a message in a bottle 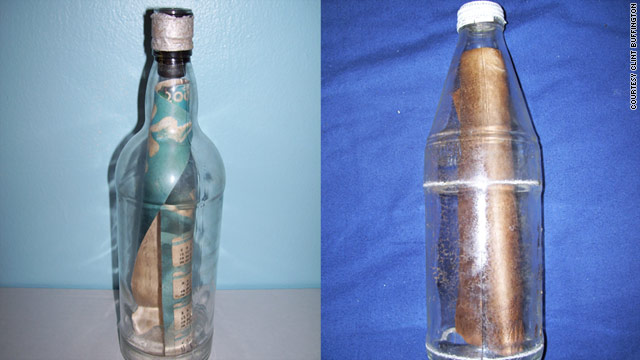 These are just two of the 40 bottles with messages inside that Clint Buffington has discovered.
STORY HIGHLIGHTS
RELATED TOPICS

The self-styled Message in a Bottle Hunter, Buffington chanced upon his first bottled message while hiking a beach in the Turks and Caicos in 2007. An "intense awareness that something very important was happening" seized him, then he saw an orange paper glinting inside a blue wine bottle.

Fresh off his fourth trip to the island chain, the teacher from Kentucky now has more whale mail than some have snail mail.

His oldest message was cast into the sea about a half-century ago. "Return it to 419 Ocean Boulevard (illegible) and resieve (sic) a reward of $150 from Tina, owner of Beachcomber," reads the note from the late owner of the Beachcomber Motel in Hampton Beach, New Hampshire. The owner had died, but her daughter, Paula Pierce, was astonished by Buffington's find.

A number of the messages are love notes a la Nicholas Sparks. None is a Sting-style SOS. One, Buffington theorizes, originated in the Pacific and crossed the Panama Canal.

By Buffington's estimate, just one in 300,000 washed-up bottles contains a message. But more than luck led to his findings.

The Turks and Caicos islands are a "flotsam magnet," says Curtis Ebbesmeyer, an oceanographer who studies the movement patterns of ocean debris. "Many different (current) pathways lead there."

Skill played a part, too. Buffington credits his to years of foraging for morel mushrooms, which trained his eyes to pick up irregularities on the ground.

When Buffington's hunt for a message ends, his hunt for its sender begins. He has tracked down almost half the authors of the messages he's uncorked. 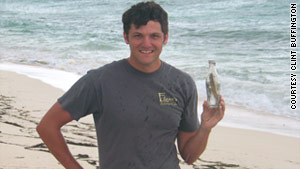 Clint Buffington displays a "fresh catch" on the beach.

He and Janet Rockware made a pilgrimage to the bridge in New Hope, Pennsylvania, where she'd dropped a bottle into the Delaware River just after her wedding 27 years earlier. (That bottle's Pennsylvania-to-Caribbean journey is especially impressive: New Hope is 50 miles inland.) She'd written that she hoped to retrieve the bottle from the ocean on her honeymoon in Key Largo, Florida.

He traveled to Washington to meet Carol Meyers, who wrote that she was including some wedding cake along with a brief note tossed off North Carolina's Outer Banks in 1999. The "black, crumbly crust" Buffington found on the letter indeed appears to be cake remnants.

He also recently went to North Carolina to meet Phil Freeland, whose late father gave the waves a business card promising its finder $1 sometime between 1977 and 1980. Buffington declined to collect the bounty, though he did accept a free lunch at a sports bar.

Some messages required a bit of "CSI work" to crack the writer's identity. One at first appeared only to say, "To." After studying it under direct, early morning sunlight, Buffington pieced together a much longer statement.

That turned out to be the prank of a teenager on a trans-Atlantic boat trip with his father in the mid-1990s, the jokester's mother explained to Buffington by phone.

Buffington feels a "deep kinship" with the people whose messages wind up in his hands. In a few cases, he has been spooked by parallels between his life and theirs. A few served in Vietnam at the same time as his dad. One turned out to live minutes from his close friends in Long Island.

The chance to forge more connections with message senders, Buffington says, is the main reason he spends "whole days just walking with my eyes on the ground."

Still, not everyone is thrilled to learn her long-lost message has been miraculously recovered. Two people were polite enough when Buffington first contacted them, then stopped taking his calls.

There's the tattered note that may or may not be in Dutch. The dollar bill covered in mysterious symbols. The brown piece of paper, tucked inside a prescription bottle, with two names written in pencil: Ramon Soler Deliz and Angela Guerra

Last month, Buffington started a blog where he invites readers to help locate the senders. A recent post seeks assistance finding a Mr. Gucilatar of the Philippines, whose name and little else was scrawled on a piece of cloth stuffed in a Gordon's gin bottle.

Buffington's stack of mystery messages is likely to grow. Seven messages remain bottled in his home, waiting for Buffington to extract them via a series of painstaking, strategically placed hammer taps: "the most terrifying part of the job."

Buffington has no "magic advice" for newbie message-in-a-bottle hunters, but there are some general rules he follows.

Forget swimming; instead, find a debris-strewn stretch of beach. Walk slowly, look closely. Tune out the washed-up lightbulbs (they usually outnumber the bottles). Keep walking. And watch for plays of light on glass: Once in a great while, one of those glimmers will be a slip of paper.