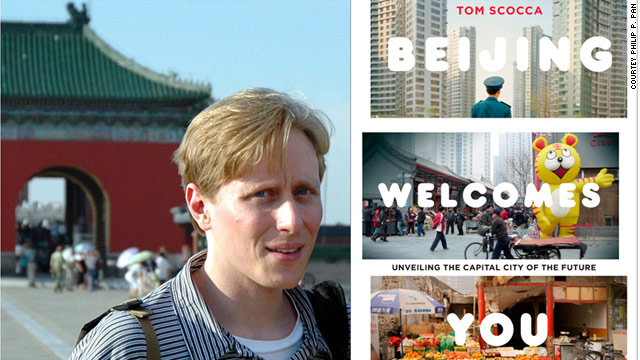 Editor's note: Tom Scocca is the managing editor of the sports site Deadspin. He also writes for Slate, The Boston Globe and The Washington Post, among other publications. He currently lives with his wife and son, a Beijing native, in New York.

(CNN) -- It's a country in the headlines every day, on its way to becoming the world's biggest economy and perhaps even replacing the U.S. as the world's No.1 superpower. But how much do you really know about China?

Most Americans remember the impressive display put on during the Olympic Games in Beijing in 2008 or, going further back, the pro-democracy demonstrations in Tiananmen Square in 1989. But to many, China is mostly a mystery. Author and journalist Tom Scocca is hoping to change that in his new book, "Beijing Welcomes You."

Scocca, a columnist for Slate and now managing editor of the sports site Deadspin, has written a thoroughly engaging account -- part travelogue, part memoir -- of his four years spent in China's capital.

Scocca witnessed Beijing's transformation leading up to the 2008 Games. He was also on hand for some of the country's most tumultuous events of the recent past, including the massive Sichuan earthquake and the Tibetan uprising.

Scocca's book is an insightful look at Beijing's effort to rebuild itself, from the demolition of the old city to the construction of a modern metropolis, now the ultimate representation of China's political and cultural capital, and of its might -- and threat.

CNN recently spoke with Scocca about his new book, and the following is an edited transcript.

CNN: How did you come to live in China and write this book?

Scocca: My wife got a job in Beijing in 2004, and I simultaneously got a job in New York. So I started traveling back and forth between the two cities, making extended visits to China, with the notion that eventually we'd pick one or the other. And the more I saw of Beijing, the more I realized that while New York is a great city -- and we do live there now -- Beijing was going through a dramatic transformation, a historic episode that I didn't want to miss.

New York would still be New York whenever we got there, but Beijing was a different city every time I saw it. So I decided, and my publisher agreed, that I had to live through this period full-time, and to try write a book that would capture what this place was like at this defining moment.

Will.i.am, other musicians to perform in Beijing

CNN: What were your initial impressions of Beijing? Did your views change over your time?

Scocca: Filth. I apologize to Beijing, a noble and ancient and dynamic city, for this, but the very first impression the city left me with was the burning smell of smog, seeping into the airplane before it even reached the gate. And out the window just this yellow-gray nothingness. Beijing would very quickly overwhelm me with its size, its complexity and its ceaseless activity, too, but before and on top of everything else, there was the smog.

The smog would never go away; it was the counterpoint to and the result of Beijing's growth and prosperity (and, since many of these smoky factories were there to send "Made in China" products across the Pacific, it was a product of American prosperity, too).

Over time, though, I grew to feel real affection for the city underneath the pollution: the visible layers of history, the vastness of its old and new ambitions, the jury-rigged equipment of daily life beside utopian projects. I could see why millions of people were choosing to migrate there.

And when my son was born in Beijing -- early and by surprise, two weeks before we were supposed to have left for a summer in the U.S. -- the city really inescapably became home for us, too.

CNN: As an American, how different was it living in a communist country?

Scocca: Certain things were dramatically different. It's funny to think of a city that was busy building an Apple Store and a Ritz-Carlton as illustrating the privations of communism. But some parts of daily life are still collectivized -- the heat in our apartment, for instance, was turned on when the public heat turned on citywide, in mid-November and no sooner. It did get chilly before then.

As for the authoritarian aspects of life there, most of those things were not quite in the background, but they were subtle. No one would announce which websites were being blocked; the Internet just wouldn't work right. You could recognize some plainclothes security agents, but maybe not all. Most of the time, people had to guess where the line was being drawn.

CNN: You were in Beijing for the buildup to the 2008 Olympic Games. Would you say the country essentially reinvented itself for this global event?

Scocca: There's no question that Beijing was a different city after the Olympics than before. The preparations for the games and then the staging amounted to a sort of condensed performance or demonstration of China's 21st-century ambitions.

So physically, there were these real, drastic changes to Beijing for better and for worse: useful improvements, like the expansion of the subway, alongside ambitious and futuristic architecture, like that looping CCTV tower, alongside plenty of thoughtless destruction and redevelopment.

And there was the attempt to reorient the city to be a part of the international community -- thus the title "Beijing Welcomes You" -- rather than being a citadel of Chinese culture and Chinese power. The results of that were more mixed.

As an international TV spectacle, the Games were a great success. As an illustration of the supposed power of the Olympics to bring openness and liberalization, they were less so. To make sure the spectacle went smoothly, the public security forces clamped down. Getting a visa became such a hassle that many tourists stayed away. Chinese people who signed up to use the designated Olympic protest zones were arrested. The streets were full of police.

And, except for a little fuss over the Internet being blocked in the press center, the International Olympic Committee was fine with that. The IOC isn't really dedicated to free expression; it runs a tight ship, and its sponsors don't want any chaos or surprises. China saw the difference between the rhetoric and the real values, and it acted accordingly.

CNN: What are your lasting impressions of Beijing?

Scocca: There were lots of distinctive Beijing feelings: the sense of disorientation when a familiar street or building was gone; the bustle as regular people took possession of a new public space. The smell of dust and welding torches. The summer light in the sky, well before 5 a.m., the morning after our son was born there. By the end, I even had a funny fondness for the diffuse, pearly glow that the pollution sometimes gave the sunlight.

Probably the most spectacular memory is of Spring Festival, the Chinese New Year. I tried to describe this in the book, and I hope I came anywhere close to doing it justice. People take to the streets with fireworks, everywhere and all at once, for days on end. Everywhere. And really serious fireworks, like you'd use in an official municipal fireworks display, the kind that shoot far up into the air and burst and rain down sparks. Only no one is in charge of the show.

The city is just roaring and glowing because the individual booms and flashes all run together. You think of this as the tightly controlled capital of a tightly controlled country, and here are millions of people running wild with explosives at once. Nothing here in the Land of the Free comes close.

CNN: What's the most important thing you want your readers to understand about China?

Scocca: I hope they'll come away from the book with a sense of just how complicated China is, and how there's more than one "real China" for us to reckon with. There's an authoritarian one-party state and there's a collection of 1.3 billion people making their own lives there; there's real progress and real repression; there's knee-jerk nationalism and a desire to be part of the larger world.

I also hope readers will understand how, for all of the challenges and shortcomings under the Chinese system, Beijing was a hopeful city. There was a sense there that it was possible for people to make new lives and for things to change for the better. Too often lately, America seems to fall into this sour, defeatist attitude: Nothing can be improved, any change will be for the worse.

This country that spanned a continent and became the most powerful nation in the world is now afraid to build new things or try new ideas, because we're obsessed with losing what we already have. Beijing reminds us that ambition can make a difference.