Employment in a month?
STORY HIGHLIGHTS

The 48-year-old father of one earned a solid middle-class income and built a diversified retirement portfolio.

Then the housing market collapsed in 2008, and Casillas soon found himself on the brink of financial ruin.

He lost his job, his home and eventually his marriage. He is one of more than 2 million Californians without work.

Casillas has tried to broaden his employment prospects by reinventing himself. He returned to school to train in information technology.

He soon discovered that in the fiercely competitive world of IT, few high-tech companies were willing to take a chance on an entry-level technician.

Casillas then tried his hand at jewelry making and discovered he was pretty good at it. He sells his wares at a local farmer's market and swap meet, but it's hardly a living.

He also volunteers at a local YMCA as a youth counselor in hopes of landing a permanent job -- but so far, no offers.

Desperate for work, Casillas eventually posted his resume on Craigslist.

"It took a lot for me to put that ad on Craigslist, because I had to change what I was before," he said. "I wasn't this rich little yuppie anymore, driving expensive cars, having expensive suits. I'm in this just like everybody else looking for work. It humbles you."

As one of more than 14 million Americans who are are out of work and three years into his job hunt, Casillas says he's willing to try anything to turn his luck around.

Enter Eli Davidson, a self-described "reinvention expert," who says she can coach Casillas into a job within 30 days.

"Ernie, if you do what I say and do your homework, I guarantee you -- you will find a great job," Davidson tells him in the dining room of the south Los Angeles home that Casillas shares with his mother.

Davidson -- a motivational speaker and author of "Funky to Fabulous," which is billed as "surefire success strategies for the savvy, sassy, and swamped" -- preaches personal empowerment.

She now runs a successful life coaching business designed to teach others how to turn their lives around.

After overcoming her own hardships -- a failed business and marriage -- Davidson says she reinvented herself out of necessity.

She usually charges $1,000 and up for a series of group sessions, but she agreed to work with Casillas for no charge because of his dire financial situation.

When people have been out of work for as long as Casillas, they need to overhaul their self-perception, according to Davidson.

Casillas breaks down, thinking of the past three years.

"Even personal friends at work, high school friends have shut the doors," he says, his voice cracking through tears. "They think because I don't have a job, I'm going to ask for money. ... It's not that. I just need support." 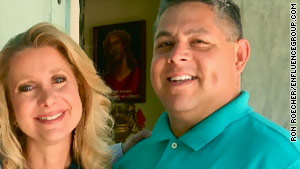 Ex-mortgage broker Ernie Castillas has turned to help from motivational speaker Eli Davidson in his hunt for a job.

Davidson tells him she will teach him "to spot the green" -- the opportunities around him -- instead of focusing on mental roadblocks that may have held him down.

"The first step for Ernie is he's going to get some inner tools by getting inspired and ignore what the outer world is telling him like, 'You can't, it's impossible, no way, it's never going to work,' " Davidson says during a motivational session.

For the next month, she tells Casillas, "You're going on a diet of all the naysayers in your life -- all those people who make you feel bad you didn't get a job."

Glancing over at his mother, Casillas jokes, "I'm not having any barbecues with my family. No more barbecues!"

Networking is a crucial tool that job seekers tend to overlook, according to Davidson. More than 80% of people who are finding employment were successful because of their networking skills, she says.

Davidson then asks Casillas, "Are you actively looking for a job on LinkedIn?"

"No, because most of the people there are engineers, (or have) bachelor's degrees, MBAs," he responds. "Here comes a guy who has 20 years of banking experience who's going into tech support; I didn't think I would measure up."

"Did you see where Ernie's perceptive filter kept him from seeing the No. 1 way this man is going to get a job?" she asks.

" 'I'm looking for an opportunity' is the phrase he is going to need to use."

Davidson instructs Casillas to build a strong online profile and to start networking on sites such as LinkedIn and Twitter.

She tells him to make five professional connections a day.

Even though Casillas says he has sent out piles of paper resumes, Davidson says that's "like playing an 8-track."

I wasn't this rich little yuppie anymore. ... I'm in this just like everybody else looking for work. It humbles you.
--Ernie Casillas
RELATED TOPICS

She tells Casillas to "think out of the box" and distinguish himself. She suggests offering a prospective employer a solution to a problem he has identified, or blogging about an employer for whom he'd like to work.

Until Casillas finds someone willing to give him an opportunity, his only source of income is an unemployment check.

He says he worries the money will soon run out unless Congress approves an extension of benefits. Despite the competition for jobs and high unemployment across most of the country, Davidson says she is optimistic about Casillas' job prospects. "I know you will find a job," she tells him.

And we'll be checking back with Casillas to see where he's at in a month.