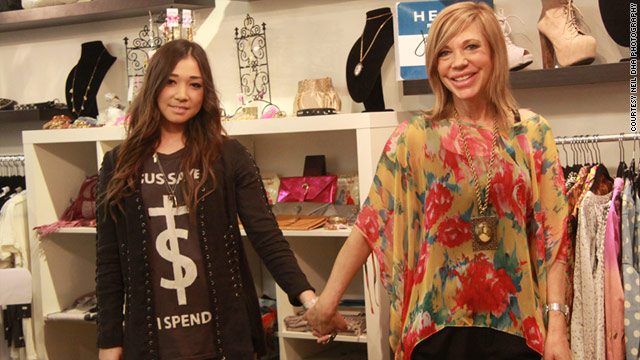 (CNN) -- When Raquel Alderman, 43, picked up a medium-size tank top in Hollister while shopping with her 14-year-old daughter, Olivia, she said she didn't intend to mimic her daughter's style.

The solid-color tank top was in Alderman's size and had no visible Hollister branding, so she said she saw no harm in purchasing it for herself. But Olivia wasn't having it.

"Mom, you are not shopping at Hollister!" Olivia remembered saying to her mother. "Moms don't shop at Hollister. You are too old for this store. OMG, I can't believe you are buying something here."

Olivia said she didn't want the Hollister employees to think her mom was buying it for herself -- she wanted to spare her any possible humiliation -- so the teenager took it to the register and carried the bag out of the store. She told Alderman she was a "PTA mom" and wanted to know why she trying to "relive her teenage years."

Shocked, Alderman explained that the tank top fit her and she liked it -- that was it. But Olivia said it wasn't what she was buying -- it was the fact that her mother was shopping in "her" store.

Alderman contributed a post about the shopping experience on Raising Teens, a blog maintained by close friend Cindy Goodman.

At the end of her post, Alderman raises a question many mothers of teenage daughters ask themselves: "Are we trying to feel or look younger by wearing their clothes or is this just our teenagers feeling embarrassed by their mom shopping in their store?"

According to a new study released by Temple University, moms are turning into "consumer doppelgängers" of their children, shopping in teen stores so as to mimic the identities of their teenage daughters.

The study began as a way to see if daughters were trying to copy their mothers, and after questioning 343 mother-daughter pairs, professor Ayalla Ruvio and her team discovered the opposite was true.

The mothers, averaging an age of 44, and the daughters, around age 16, were quizzed about their shopping habits. And this phenomenon, emerging over the last five years, is the last thing teen daughters want.

"They're in a stage where all they want to show is how independent they are and how they construct their own separate unique image that does not look like their mother," Ruvio said. "And then the mother goes out and copies them."

But mothers aren't dressing like their daughters to look like teenagers, she said. Cognitive age is more important than actual age -- women feel younger, so they want to project that personality with their clothing, according to Ruvio.

Ruvio suggests that another motivation behind this behavior is a lack of time to keep up with fashion trends on mothers' parts. Instead, they look to their daughters as fashionable role models and mimic the styles.

"We live in a society that one of the main values is to look younger," Ruvio said. "Most of these women have kids, work and they don't have time to monitor the market and see what is cool and hip, so they basically take a shortcut. Through their teenage daughters, they know they're safe."

Roni Cohen-Sandler, a psychologist specializing in mother-daughter relationships, warns against this phenomenon and the potential effects it can have on adolescent development. She said she believes it inspires a feeling of competition in what is supposed to be a supportive relationship.

"It gives teen girls an unfortunate message about how the mom feels about herself, her age and her own insecurities about appearance," she said. "That's a message that has me very concerned: It's a youth-worshipping philosophy and suggests that the mom isn't comfortable with getting older."

Christina McMenemy, a mother of two young children, has battled the age-appropriate-fashion question. After losing 80 pounds, the 35-year-old said she wanted to show off what she's accomplished, and not with a miniskirt or cutoff shirt, but a ruffled shirt. McMenemy went to Kohl's and accidentally wandered into the juniors' department after spying a top she liked. McMenemy said a woman in her 20s gave her a hateful look.

"Let your teenage daughters look cute, but you want to look sophisticated and elegant"
--Tina Adams, owner of Wardrobe Consulting and Signature Services

"I don't feel like I should be forbidden from dressing fashionably and looking good just because I'm a 30-something mom," McMenemy said. "I don't see any age limits listed on the labels. Now that I've lost the weight, I really enjoy finding pretty clothing because it reminds me to appreciate the body I've got and all of the work I've put into it at this point."

McMenemy said she believes that society puts mothers at a crossroads. You can be the good, frumpy mom who cares more about her kids than what she should be wearing, or the mom who is more fashionable and therefore must be more into her needs than her children's.

But McMenemy said she doesn't want to dress like a teenager -- she wants to feel good about her appearance and wear what makes her happy.

There is a difference between looking good and looking "cute," according to Tina Adams, who owns Wardrobe Consulting and Signature Services, LLC. She advises mothers and daughters on their wardrobe and how to dress appropriately befitting their age. The biggest conflict Adams encounters is telling women they can look fabulous without dressing like a teenager.

"We try to tell them, 'Do you really want to look cute?' " Adams said. "Let your teenage daughters look cute, but you want to look sophisticated and elegant."

To achieve that look, Adams suggests skipping the juniors' department's low-rise jeans and finding a pair of nice midrise boot-cut jeans (read: not "mom jeans"). Also, a dress with a cinched-in waist, V-neck shirt or a pencil skirt are all key pieces to a sophisticated wardrobe that showcases maturity and femininity. Shopping in the juniors' department can often result in ill-fitting clothes because of the sizing divide.

Cohen-Sandler, the psychologist, has heard from many of her clients that there is nothing a teenage daughter enjoys hearing more than, "Can you help me find something to wear?" They don't want their mothers to be unfashionable, but they don't want to dress like twins, either, she said.

Jennifer Gray and her daughter, Shaughnessy Chow-Domos, 18, own a boutique together in Vancouver, British Columbia, called Jennyfleur Loves... . Their store caters to a wide range of women, from age 13 to 70. Mothers and daughters alike can find trends they love because Gray and Chow-Domos purchase their favorite items for the store. The two also share clothes, including leather jackets and designer finds they buy to borrow from one another.

But recognizing their age differences, both said they know what they can share and what to avoid. Each has their own style. Shopping together remains one of their favorite activities, and they don't just look out for themselves, they said.

"I don't think I've ever met anyone that can shop like I do, except for Shaughnessy," Gray said. "We're perfect shopping partners. We'll go into a store and grab a stack of clothes for each other while we're shopping for ourselves."

This is exactly the mother-daughter bond that Cohen-Sandler said she fears will disappear if the consumer doppelgänger trend continues. Teenage girls regard "their" stores with ownership; shopping at Hollister and Abercrombie & Fitch at age 14 is like a membership to an exclusive club, one where they don't want Mom shopping.

"Teens lose a source of feedback and information that they really need to count on during these years," Cohen-Sandler said.

"What mothers have to understand is that it's not just a tank top -- it's symbolic of many different things: roles that mothers and daughters have, respecting boundaries between teen and adult worlds, knowing when you make a purchase or wear something, it's going to have an effect on your daughter, the daughter's relationship with peers and you."

But to McMenemy, with a 6-year-old daughter, this study and her experience raise another point entirely. When mothers put themselves after their children and husbands, is dressing how they want to such a crime?

"There's too many stories of fashion making women feel bad about themselves. Why is it so wrong to see something that is fashionable and want to wear it if you do look good in it?" she asked.

However, no matter their stance, every woman interviewed said the same thing -- women look best when they are who they are.