How to negotiate with your kids 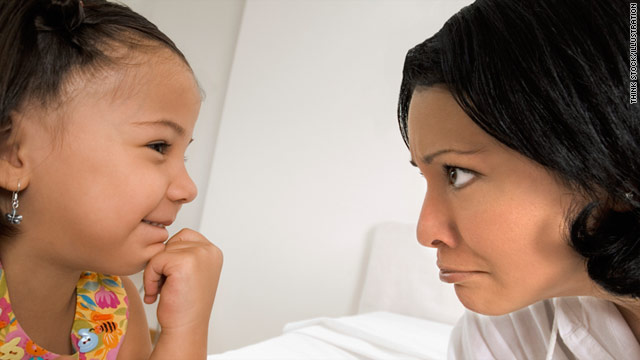 Negotiating with children may drive parents crazy, but it's a valuable skill for kids to learn.
STORY HIGHLIGHTS
RELATED TOPICS

I should be reading the last of three bedtime stories to my 3-year-old before I sing the three songs that usually send her to sleepyland. No more than three. That's the deal. But I have to make a last-minute work call at 8:30 p.m. I start playing an episode of "Yo Gabba Gabba," her favorite commercial-free program. It usually guarantees me 20 minutes of work time, but it's not working.

What's with the demand for pajamas? My child never wants to put on her pajamas because that means bedtime.

You'd never guess I got an A in my negotiation class at Harvard Kennedy School. I successfully negotiated the finer points of international treaties with classmates from the Central Intelligence Agency, the U.S. military and the bureaucrats from various foreign governments on my way to a master's degree in public policy.

I can't afford to have her howling during my phone call. The kid wins this round.

As desperate as I felt that night, I brag to my friends about her ability to size up the power dynamic in two seconds and negotiate at a pretty advanced level. (Never mind that we went to bed as soon as the call was done. I read her a lot more books and sang a lot more songs that night. I owed her.)

Parenting.com: 9 things you shouldn't say to your child

I know my situation isn't special. Little children can debate every bite of dinner, trip to the potty, the length of any play date, how much soap to use in the tub, how many books to read and songs to sing at bedtime and if bedtime is even a good idea. It's the nitpicking around those everyday tasks that can drive parents crazy and make us less likely to want to negotiate anything.

As children get older, what they want causes parents even more anxiety: more television time to absorb popular culture's cavalier attitudes about sex and violence, more computer time to talk with who-knows-who, more freedom to go places without parents, and eventually freedom to date and drive and all the activities that will drive me to distraction.

Despite my late-night failure, I know I must teach my kid to negotiate. I know if I don't teach my child to think for herself, she won't be able to make big decisions as she gets older.

From my time working with teenagers in a nonprofit youth program, I saw the consequences of kids who hadn't been given the chance to debate different decisions and pick the best one or learn from their mistakes. If they don't know how to decide what they want and figure out how to get it, they'll follow whichever music celebrity or local teenager is cool in their eyes -- and that could mean getting drunk or using drugs, having unsafe sex or worse.

"Negotiating is important for all kids in an age appropriate way and if you offer your children choices, they're going to inevitably make some mistakes they'll later regret," says Alina Tugend, author of "Better By Mistake: the Unexpected Benefits of Being Wrong." "It's often very hard for parents to give up the control not just of making the decision for their child, but also to let them make a decision that they think is wrong. But it's the only way children will learn."

Here are some tips to start teaching your kids the fine art of negotiation.

Don't fear making mistakes. Just get started. Any good negotiator knows that you can simply say, "I'm sorry I was wrong. You can't have three gallons of ice cream before dinner." You can also change your mind if your child doesn't honor their side of the negotiation. Your kids will be glad you respected them enough to listen to their opinions, even if you end up saying "No." (And any good negotiation can end with a "No.")

It's not optional. Children with authoritarian parents who don't allow children to negotiate anything grow up overly compliant or overly disruptive, and children with overly permissive parents don't learn negotiation because they get what they want anyway, says Julie Braungart-Rieker, a psychology professor and director of the University of Notre Dame's Center for Children & Families.

"Either situation can create an anxiety provoking environment because kids like rules and consistency," she says. "It's more calming and secure when there are rules that make sense and children know where those boundaries are."

Offer choices early. Children tend to show signs of negotiation skills as early as 3 years old. Yet parents can teach children as young as 1 to make choices with close-ended options such as "Do you want the blue or red T-shirt for school?" and "Do you want the apple or orange for snack?"

"Kids develop a sense of pride in being able to have that kind of control," says Braungart-Rieker. "Especially as they start interacting with peers in preschool, there's a lot of negotiation over snacks and toys. Kids who are better at those skills tend to flourish in this setting."

Offer a way out. When we first started attending religious services in our new town, I insisted that my kid dress up a little. We were going to look a little nicer than her usual tie dye/jean shorts combination and my tank top/yoga pants look. She didn't want to dress up but agreed to do so when I offered to let her wear whatever she wanted when we got home. As soon as we arrived back at the house, she walked to her room and put on a very dull brown shirt/shorts combo. I was impressed she had remembered. And when I later figured out the casual atmosphere at services, I let her return to her tie dye combo.

Ask for help. My daughter didn't care to wear her glasses when she first started needing them at age 2. Flossing wasn't fun either when the dentist introduced the task last month. I asked her doctor and dentist to speak to her directly about what she needed to do. I asked our sitter to tell her how great she looked in her glasses (and it was true -- she looked fabulous) and what a grownup job flossing can be. (That one is a stretch but I think it's working.)

Know your limits. No way you're going to negotiate over car seats or seat belts or ice cream for dinner. However, some kids eventually become old enough to negotiate tasks that must be done but can be done with some flexibility, like when they can do their homework.

"A lot of that depends on the child," says Jason Gold, a psychologist and psychoanalyst in private practice who also works with families and children at the Pacella Parent Child Center in Manhattan. "Does your child come home with lots of energy and can jump into work? Or is he worn out from school needing some down time and can get to homework later?"

"However, the parents need to be in some degree of control while allowing a child to explore and have fun with their new verbal and cognitive skills," Gold says. "If you don't buy me this toy then I scream, then it's more emotional blackmail than negotiation."

Give older kids more flexibility. Author Tugend's 12-year-old son recently wanted to see the new Harry Potter movie at midnight. She gave him permission if he figured out a way to get home at 2 a.m. He proposed walking from the neighborhood theater, which she thought was a bad idea.

"I told him if he could find a way -- a friend's parent or an older sibling -- he could go," she says. "That way I wasn't just saying no or yes, but setting certain parameters and telling him he needed to figure out how to, as a friend of mine says, let me say yes."

It's especially important for teens. Teens can be pretty self-absorbed as they figure out who they are and what they want in life. Helping them negotiate teaches them empathy and self-awareness, seeing the situation from the other person's perspective and acknowledging their own contributions to the disagreement.

"Empathy, working effectively with others and self-knowledge are critical skills for success in the workplace and all other social settings -- like schools and families," says Keith Hefner, my former boss at Youth Communication in New York. "When teens don't have these skills it leads to black and white thinking: I'm right, you're wrong; digging in one's heels instead of addressing the problem."

As teens learn to negotiate, they learn the reasons for a rule like a curfew: Parents are anxious about their children's safety, about other people driving drunk or any number of issues.

"When teens learn that there are things they can do to reduce their parents' anxiety, such as calling in, they learn they can negotiate a later curfew," says Hefner. "When teens participate in a negotiation over curfew, it can help parents to see that their child is older and more capable than they imagined."