Mystical P.I. in 'City of the Dead' 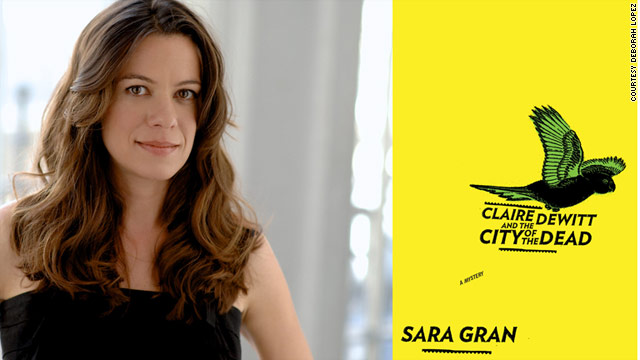 (CNN) -- "Only a fool looks for answers. The wise detective seeks only questions."

That cryptic statement sounds more likely to come from a Tibetan monk than a French detective, but it's the trippy kind of prose that's right at home in one of the summer's most talked about mystery novels, "Claire DeWitt and the City of the Dead."

The book from critically acclaimed author Sara Gran reads a bit like if David Lynch directed a Raymond Chandler novel. On its surface, the story is about private investigator Claire DeWitt's search for a missing prosecutor in post-Katrina New Orleans, but to paraphrase a line from the movie "JFK," this novel is a mystery wrapped in a riddle inside an enigma.

Claire DeWitt is not your average P.I. She's the self-proclaimed world's greatest detective, but also uses her dreams, mind-expanding herbs and a manual on "Détection" from a mysterious Frenchman to help her solve cases. She also has her own mysteries to contend with, including her mentor's unsolved murder and the disappearance of a childhood friend from Brooklyn.

DeWitt is being called one of the genre's most original characters in years, described as a "cool blend of Nancy Drew and Sid Vicious." The novel is getting rave reviews from some grand dames of the mystery genre, including Sue Grafton and Laura Lippman.

Gran is a former resident of New Orleans and now lives in Northern California. CNN recently spoke to the author. The following is an edited transcript:

CNN: Tell me more about your detective, Claire DeWitt.

Gran: Claire DeWitt is the most autobiographical character I've written. In a strange way, I've realized that Claire is my way of explaining myself to the world, which is oddly satisfying. Claire and I both grew up in Brooklyn back when it was still Brooklyn, which would be a good start for any detective, in the '70s and '80s it had the highest crime rate in the country. Unlike me, Claire is scared of almost nothing, both because she's brave and because she doesn't value her life very much (I'm both fearful and happy).

Claire is one of those people who needs to learn everything the hardest way possible, through her own experience. That's a rough way to live. My favorite thing about Claire is that to her, all people are radically equal. She has the same respect, or lack thereof, for homeless kids in New Orleans and senators in Washington. That's a quality that I, and I think many of us, could use more of.

Out of this world heist leads to 'Sex on the Moon'

CNN: What would a famous sleuth like Sherlock Holmes say about Claire's methods?

Gran: Sherlock Holmes was not exactly a teetotaler himself, although he used cocaine when he was bored, not when he was on a case. But the use of intoxicants has been a part of the detective story since the start or close to it. If I remember right, Poe's Daupin enjoyed a cocktail. I think Holmes would like Claire. Watson, I think, would not approve of her.

In my fictional world of detectives, Claire isn't liked or respected very much by the other detectives. People who choose (or are called to) a different way are often not invited to be a part of the club. But Claire has her tiny corner of people who understand her, and I bet if Holmes or Daupin or Marlowe were around they might not understand her methods, but they would respect her results. I think there would be some kinship there. Maybe I'm flattering myself.

CNN: Tell me about the philosophical bits of wisdom from fictional detective Jacques Silette throughout the book, like, "Those who try to grasp on to the mystery will never succeed, only those who let it slip through their fingers will come to know it and hear its secrets."

Gran: The Jacques Silette bits are very dear to my heart, and a culmination of the kind of stuff I've been thinking about and studying all my life. In most mystical systems, the belief is that we each have a piece of the divine inside of us. It's like a flame that can never be put out, no matter how far we've strayed or how low we've sunk. It's just not within our capacities to extinguish it. Among other things, once you're connected with that part of you, you pretty much get to know everything, because the divine is all knowing. So this seems like a skill that would be very useful in detective work -- the idea that we all have the answers inside us already, we just need to somehow make contact.

I also thought this idea, that this little flame never, ever goes out, which I believe very strongly, would be an interesting way for a detective, who deals with people who have been both victims and perpetrators of some pretty awful stuff, to look at the world. Over the past few years yoga and some of the other mystical traditions have been misunderstood, and many people think if they're not "good" they're somehow not "spiritual," or that dealing with our darker aspects is "unspiritual." But that's really not what the teachings tell us. The teachings tell us the divine is everywhere equally, and that all people are inherently equal.

Again, a neat idea (or so I think!) for a detective to hold in mind as she pursues a case. Of course the word "mystic" is also connected with the word "mystery," which not only applies to crime but also to a lot of religious and mystical concepts, like the mysteries of the rosary. So I think all this stuff is connected, and one of the really fun things to do as a writer is to find these subtle, implicit, connections in our lives and tease them out and make them explicit.

Author: Watch out for 'the accident people'

CNN: Who or what influences you in your writing?

Gran: Everything. I've been blessed by an interesting life with a lot of somewhat extreme ups and downs, as have most people, if you take the time to ask. Every day brings something new and interesting if you pay attention.

CNN: The story takes place largely in New Orleans, and at one point a character says, "If you're hoping for a happy ending, you lookin' in the wrong city." You once lived there, is this how you feel?

Gran: Well, as anyone who's read my previous books knows, this is the closest to a happy ending I've ever come, so maybe I misspoke! But New Orleans is a city with a lot of beauty and a lot of challenges. New Orleans is a violent place, and that makes happy endings hard -- and that's why, although I love New Orleans, I don't live there anymore.

CNN: What's next? Are you working on Claire DeWitt's next case?

Gran: I'm almost done with the second Claire DeWitt book, which takes place in the Bay Area. We'll start a new mystery and also learn more about Claire's life in San Francisco, her history, her childhood in Brooklyn, and her years with Constance. We'll check in with Mick and Andray and the other characters from "City of the Dead," who will come back in a bigger way in the third book.

As a writer it's a real joy to know I can stay with these characters and their stories as long as I want to, and continue to expand their world if I choose. As soon as I wrap this up it's on to book three, which takes place in Los Angeles and Las Vegas. I've got a few pages done but I'm eager to jump in full-time. Book four will bring Claire back to Brooklyn, where all (or most) will be revealed.