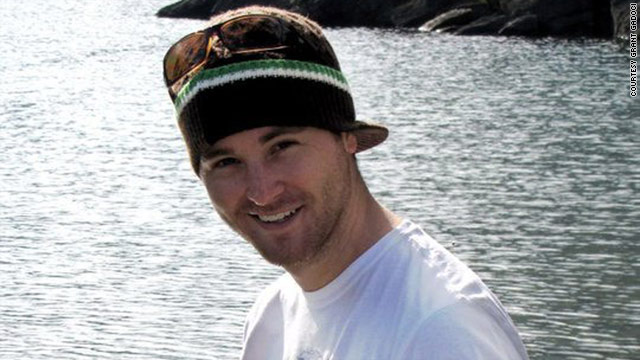 Unlimited, paid vacation is one of the many perks Grant Gadoci enjoys at software company HotSchedules.
STORY HIGHLIGHTS

Editor's note: This week, CNN is taking a closer look at people between age 18 and 30 or the Millennial generation -- who they are, how they work and what they want from life.

(CNN) -- Last year, 27-year-old Grant Gadoci declared that he needed a year off of work.

"I love traveling," said Gadoci, who works for the software company HotSchedules. "So here, if you need to take time off, you send an e-mail notification, and they say, 'have a good time!' "

Gadoci took his boss up on an offer for a leave of absence and moved to Italy. He's now back in the office, working in sales, after his year off.

"They recognized that work-life balance, for many people, is just the definition of being a happy worker," Gadoci said.

Unlimited paid vacation -- as long as you still get your work done -- is one of the many perks Gadoci enjoys at Austin, Texas-based HotSchedules. The company also provides its young staff members with a massage chair, a pingpong table, a tricked-out gaming suite including "Rock Band," and a monthly cookout served by the boss.

HotSchedules CEO Ray Pawlikowski, who founded the company in 1999, says that catering to Gen-Y workers is smart business. Thirty-nine of his 65 employees are under the age of 32.

What Millennials are missing

"If you create an environment like we have here, which is a fun place to come work, and you engage them and you really capture their attention, they're fantastic employees," Pawlikowski said.

Who is this new breed of worker, and why do companies like HotSchedules pamper them?

Generation Y, or millennials, make up roughly 50 million 18- to 30-year-olds. According to a 2010 Pew Research Center study on social trends, this generation is on course to become the most educated in history and, in a decade or so, will account for nearly half the employees in the world.

Dr. John Butler, a University of Texas professor, has conducted extensive research on innovation and millennials. He says one defining characteristic of millennials is their short attention spans.

"I think that Gen-Y does not expect necessarily to be tied to a job," Butler said.

That's a gutsy decision for a generation with 13 percent unemployment.

"The big one I hear about, and I'm guilty too, is a sense of entitlement," said Gen-Y consultant Jason Dorsey, who rakes in up to $25,000 per speech teaching Fortune 500 companies how to work with his generation. "It's showing up and just feeling like people owe you things," the 33-year-old says.

Dorsey adds that some millennials also have a hard time dealing with negative feedback. He says it stems from the way many were raised.

"The reality is, we've had parents who have told us how great we are since we were kids, you know. We listen to Baby Einstein to get smarter. We go to school and suffer from grade inflation, and if we didn't get an A, we went and negotiated. We've built up our self-esteem, and the result is, we can't deal with adversity," Dorsey said.

Why would anyone even want to hire millennials? Are they worth the trouble?

"We want to make a difference from day one, which is totally huge. We show up, and that's why we think we should be vice president," joked Dorsey. "Gen-Y brings a lot of valuable skill sets in terms of thinking outside the box. We don't know what status quo means, but we know that if something doesn't work, we're going to speak up about it."

Dorsey has words of wisdom for companies like HotSchedules that employ a multitude of Gen-Yers: "When millennials show up at the office, you have to provide specific examples of what you expect. And the reason is, we often lack real world experience. So we may have degrees and big expectations, but we don't necessarily know what 'business casual' means.

HotSchedules boss Pawlikowski swears by his staff. "I think the biggest thing is that they bring a new level of dedication that we haven't seen in the past."

And his Gen-Y employees, including Gadoci, may have a better perspective on life than generations before them.

"I want to make sure I'm doing things that make me happy," Gadoci said. "So if it means maybe starting a little bit later down a long career path, then I'm absolutely going to take that opportunity to enjoy life."

Perhaps Dorsey sums up the Gen-Y work attitude best: "The truth is, millennials just want something they can put on Facebook!"