9 things you shouldn't say to your child 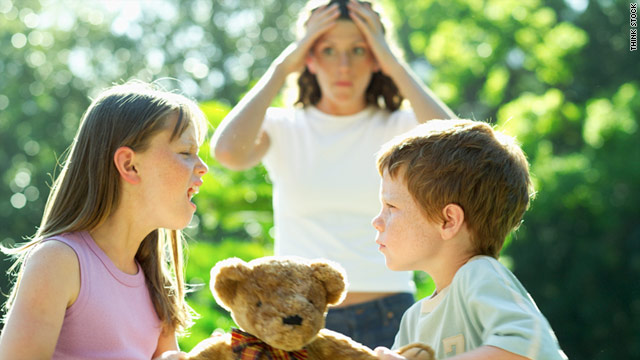 (Parenting.com) -- I was trying to do two things at once -- cook (in the kitchen) while deciphering some paperwork (in the next room). I'd been interrupted a thousand times with requests for snacks, shrieks over spilled paint water, questions about what squirrels like to eat, and arguments over whether clouds could be blue and flowers could be green. And did I mention that a ruptured disk in my back was throbbing even worse than my head?

Still, nothing can excuse my behavior that afternoon.

I erupted like Mount Momsuvius: "Enough! Get out! Stop bothering me!"

The look on my daughters' faces said it all. The 2-year-old's eyes widened. The 4-year-old furrowed her brow and jabbed her thumb between her lips. Immediately I wished I could stuff the hot-lava words back into my mouth. They certainly hadn't come from my heart, or my brain.

We all say the wrong thing sometimes, leaving our kids feeling hurt, angry, or confused. Read on for some of the most common verbal missteps moms and dads make, and kinder, gentler alternatives:

A parent who doesn't crave an occasional break is a saint, a martyr, or someone who's so overdue for some time alone she's forgotten the benefits of recharging.

Trouble is, when you routinely tell your kids, "Don't bother me" or "I'm busy," they internalize that message, says Suzette Haden Elgin, Ph.D., founder of the Ozark Center for Language Studies, in Huntsville, Arkansas.

"They begin to think there's no point in talking to you because you're always brushing them off." If you set up that pattern when your children are small, then they may be less likely to tell you things as they get older.

From infancy, kids should get in the habit of seeing their parents take time for themselves. Use pressure-release valves -- whether signing up with a babysitting co-op, trading off childcare with your partner or a friend, or even parking your child in front of a video so that you can have half an hour to relax and regroup.

At those times when you're preoccupied (or overstressed, as I was when I exploded at my girls), set up some parameters in advance. I might have said, "Mom has to finish this one thing, so I need you to paint quietly for a few minutes. When I'm done, we'll go outside."

Parenting.com: The 5 best ways to raise a grateful child

Just be realistic. A toddler and a preschooler aren't likely to amuse themselves for a whole hour.

Labels are shortcuts that shortchange kids: "Why are you so mean to Katie?" Or "How could you be such a klutz?" Sometimes kids overhear us talking to others: "She's my shy one."

Young children believe what they hear without question, even when it's about themselves. So negative labels can become a self-fulfilling prophecy.

Thomas gets the message that meanness is his nature. "Klutzy" Sarah begins to think of herself that way, undermining her confidence. Even labels that seem neutral or positive -- "shy" or "smart" -- pigeonhole a child and place unnecessary or inappropriate expectations on her.

The worst ones cut dangerously deep. Many a parent can still vividly, and bitterly, remember when her own parent said something like "You're so hopeless" (or "lazy" or "stupid").

A far better approach is to address the specific behavior and leave the adjectives about your child's personality out of it. For example, "Katie's feelings were hurt when you told everyone not to play with her. How can we make her feel better?"

Parenting.com: How to win over super-stubborn children

Variations: "Don't be sad." "Don't be a baby." "Now, now -- there's no reason to be afraid." But kids do get upset enough to cry, especially toddlers, who can't always articulate their feelings with words. They do get sad. They do get frightened.

"It's natural to want to protect a child from such feelings," says Debbie Glasser, Ph.D., director of Family Support Services at the Mailman Segal Institute for Early Childhood Studies at Nova Southeastern University, in Fort Lauderdale. "But saying 'Don't be' doesn't make a child feel better, and it also can send the message that his emotions aren't valid -- that it's not okay to be sad or scared."

Rather than deny that your child feels a particular way -- when he obviously does -- acknowledge the emotion up front.

"It must make you really sad when Jason says he doesn't want to be your friend anymore." "Yes, the waves sure can be scary when you're not used to them. But we'll just stand here together and let them tickle our feet. I promise I won't let go of your hand."

By naming the real feelings that your child has, you'll give him the words to express himself -- and you'll show him what it means to be empathetic. Ultimately, he'll cry less and describe his emotions instead.

It might seem helpful to hold out a sibling or friend as a shining example. "Look how well Sam zips his coat," you might say. Or "Jenna's using the potty already, so why can't you do that too?" But comparisons almost always backfire. Your child is herself, not Sam or Jenna.

It's natural for parents to compare their kids, to look for a frame of reference about their milestones or their behavior, say experts.

But don't let your child hear you doing it. Kids develop at their own pace and have their own temperament and personality. Comparing your child to someone else implies that you wish yours were different.

Nor does making comparisons help change behavior. Being pressured to do something she's not ready for (or doesn't like to do) can be confusing to a little kid and can undermine her self-confidence. She's also likely to resent you and resolve not to do what you want, in a test of wills.

Parenting.com: How to deal with sibling rivalry

Instead, encourage her current achievements: "Wow, you put both arms in your coat all by yourself!" Or "Thanks for telling me your diaper needs changing."

'You know better than that!'

Like comparisons, quick gibes can sting in ways parents never imagine. For one thing, a child actually may not have known better. Learning is a process of trial and error. Did your child really understand that a heavy pitcher would be hard to pour from? Maybe it didn't seem that full, or it was different from the one he's successfully poured from by himself at preschool.

And even if he made the same mistake just yesterday, your comment is neither productive nor supportive. Give your child the benefit of the doubt, and be specific. Say "I like it better if you do it this way, thank you."

Similar jabs include "I can't believe you did that!" and "It's about time!" They may not seem awful, but you don't want to say them too much. They add up, and the underlying message kids hear is: "You're a pain in the neck, and you never do anything right."

'Stop or I'll give you something to cry about!'

Threats, usually the result of parental frustration, are rarely effective. We sputter warnings like "Do this or else!" or "If you do that one more time, I'll spank you!"

The problem is that sooner or later you have to make good on the threat or else it loses its power. Threats of hitting have been found to lead to more spanking -- which itself has been proven to be an ineffective way to change behavior.

The younger a child is, the longer it takes for a lesson to sink in. "Studies have shown that the odds of a two-year-old's repeating a misdeed later in the same day are eighty percent no matter what sort of discipline you use," says Murray Straus, Ph.D., a sociologist at the University of New Hampshire's Family Research Lab.

Even with older kids, no discipline strategy yields surefire results right off the bat every time. So it's more effective to develop a repertoire of constructive tactics, such as redirection, removing the child from the situation, or time-outs, than it is to rely on those with proven negative consequences, including verbal threats and spanking.

'Wait till daddy gets home!'

This familiar parenting cliché is not only another kind of threat, it's also diluted discipline. To be effective, you need to take care of a situation immediately yourself.

Discipline that's postponed doesn't connect the consequences with your child's actions. By the time the other parent gets home, it's likely that your child will actually have forgotten what she did wrong. Alternately, the agony of anticipating a punishment may be worse than what the original crime deserved.

Passing the buck to someone else also undermines your authority. "Why should I listen to Mom if she's not going to do anything anyway?" your child may reason. Not least, you're putting your partner in an undeserved bad-cop role.

Who in this world of back-to-back appointments, overbooked schedules, sleep deficits, and traffic snarls hasn't uttered these immortal words?

Certainly every parent whose toddler can't find his shoes or blankie or who's blissfully oblivious of anything but putting on his socks "all by self!" has. Consider, though, your tone of voice when you implore a child to hurry, and how often you say it.

If you're starting to whine, screech, or sigh every day, with your hands on your hips and your toes tapping, beware. There's a tendency when we're rushed to make our kids feel guilty for making us rush. The guilt may make them feel bad, but it doesn't motivate them to move faster.

"It got so hectic at my house in the mornings, I hated that the last image my kids had of me was being angry," says family therapist Paul Coleman, author of "How to Say It to Your Kids." "So I made a pact with myself. No matter what, I wouldn't yell or roll my eyes even if someone spilled their Cheerios or asked me to find something just as we were heading out."

Rather than hectoring ("I told you to turn off that TV five minutes ago!"), he looks for calm ways to speed things along (he turns off the set himself).

What could possibly be wrong with praise? Positive reinforcement, after all, is one of the most effective tools a parent has. The trouble comes in when the praise is vague and indiscriminate.

Tossing out "Great job!" for every little thing your child does -- from finishing his milk to drawing a picture -- becomes meaningless. Kids tune it out. They can also tell the difference between praise for doing something rote or simple and praise for a real effort.

Parenting.com: How to get your kid to sleep in her own bed

To get out of the habit of such effusiveness:

• Praise only those accomplishments that require real effort. Finishing a glass of milk doesn't cut it. Neither does drawing a picture, if your child is the kind who makes dozens of them every day.

• Be specific. Instead of "Beautiful job," say, "What bright, happy colors you picked for the dog's spots." Or "I see you drew a picture of the story that we read this morning."

• Praise the behavior rather than the child: "You were so quiet with your puzzle while I was finishing that paperwork, just like I asked."

How much nicer if I'd said that to my daughters instead of transforming into a spewing volcano. Luckily, I'm sure to get another opportunity tomorrow.