The cure for the compulsive helper 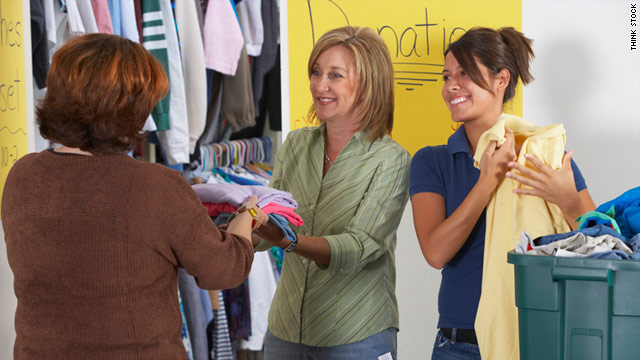 There's a difference between helping out and butting in.
STORY HIGHLIGHTS
RELATED TOPICS

(Oprah.com) -- At the drugstore one night a few months ago, I ran into a man I knew from my neighborhood. When he mentioned in passing that he was looking for a personal trainer, I had to restrain myself from jumping up and down in aisle nine. My good friend, a personal trainer, had been waiting tables for months because she couldn't find work in her field.

I rushed home with a familiar flutter of excitement, and wrote an e-mail introducing my friend to her newest client: "You two will work beautifully together!" I promised.

Without explanation, my friend never followed up.

Three weeks and two unanswered text messages later, I called her and got no response. Then I stared at my silent phone as if it had betrayed me. To my alarm, I found myself gulping back tears. That's when I had to admit that I suffered from a ludicrous disease: chronic helping tic. No, it's not an official psychological affliction, but it should be.

I inherited CHT from my mother. My sister might have a touch of it, too. Honestly, so do at least half the women I know.

Oprah.com: Overhelpers anonymous: How to start taking care of yourself

Symptoms include doling out unsolicited advice, playing matchmaker, doing other people's networking for them, and approaching strangers to whisper, "Your bra strap's showing."

But over the course of my 31 years, I'd learned the hard way that my gratuitous guidance -- no matter how well intentioned -- could be misconstrued as, well, annoying. I'd also learned that when my assistance wasn't met with the response I craved -- a balloon bouquet, a parade in my honor, or at least a thank-you note -- it hurt.

I decided that the time had come to cure my CHT -- not by helping less, but by becoming more mindfully helpful. I would train myself to think before offering aid, and to provide it only when people really wanted it.

I devised a challenge: For 30 days, unless I was asked directly (or witnessed someone choking), I would keep my helpfulness to myself.

On day one, I woke to a text message from an old friend whose life falls apart on a semiregular basis: "My life is falling apart. Again." Normally I would have called an emergency life-reassembly meeting at a Starbucks of her choosing. But I told myself this wasn't a real emergency.

Real emergencies aren't conveyed via text message. And because my friend's calamities are usually existential in nature -- a general sense of ennui, a crisis of faith, a sudden rash of cynicism about free will -- there's rarely anything I can do to solve them anyway.

Still, I couldn't help thinking that if she didn't need my help, she wouldn't have texted. I felt my CHT flaring up.

So I tried something new. Instead of helping, I sought help. I e-mailed Sue Patton Thoele, retired psychotherapist and author of "The Courage to Be Yourself" and "The Mindful Woman," books written for those of us who dismiss our own needs to tend to others'.

Whenever I get the urge to help, Thoele told me, I should ask myself, If I never receive credit or thanks for this favor, do I still want to grant it?

Oprah.com: What it means to give back without rescuing someone else

I confessed to myself that what I really wanted, deep down, was to hear my friend tell me, "I knew you'd say the perfect thing."

Feeling sheepish, I snapped out of the fantasy and texted my friend: "I'm so sorry to hear that. xoxo." Then I spent the morning worrying that I was a pitiless porcupine.

Later that day, another friend e-mailed to share the news that the poetry press she'd launched had just gotten its first media attention. My immediate impulse was not to wish her many happy returns, but to shoot her a list of all the other media outlets she should contact. I was halfway through my list before I realized what I was doing. I deleted and started over.

"Congratulations!" I wrote. "I'm so proud of you!"

Oprah.com: Inside a best friendship: the good, the awful, the hilarious

The prospect of composing a comprehensive public relations plan on the spot had made me so jittery, my pulse was racing. But the sense of calm that followed my decision to write a more appropriate e-mail got me through another 24 hours CHT-free.

And then I spotted a man standing on a street corner, looking puzzled. When I approached him on autopilot to ask if he needed directions, he looked at me, disoriented. "No," he said. He scratched his head. "I'm just...thinking."

He seemed neither touched nor surprised that I'd extended myself, which got me thinking about gender roles.

In our e-mail exchange, Thoele had confirmed for me that "a woman's compulsion to help is both biologically and societally induced." Not only are we wired to offer support, but because our culture approves of the helper role for women, we help without thinking and everyone cheers us on.

The idea that my CHT might be rooted in sexist conventions irritated me so much that I unequivocally withheld my aid for an entire week. But on day eight, when I met two friends for dinner and the check came, I nearly relapsed.

Ordinarily, I would have swiped the bill the second it hit the table, added the tip in my head, divided the total by three, and announced what everyone owed. This time I literally sat on my hands while two of the smartest people I know agonized over simple math.

Finally, one of them turned toward me. "Diana? Help?"

"Twenty-one each," I blurted. "Including the tip."

By the third week, my helping behavior had become less automatic.

The few favors I did along the way were carefully chosen: After hearing that a friend of a friend's young daughter was gravely ill, I attended the bone marrow drive and got my cheek swabbed.

A couple of days later, when a friend who has shown me impossible loyalty for more than a decade confided that she was suffering from anxiety attacks, I asked if I could look into meditation classes that we might attend together.

On both occasions, I felt good about the support I was offering. I didn't feel put out. I didn't want anything in return. I was just thankful for the opportunity to give.

Oprah.com: How to help a friend who can't tell you what she needs

According to Thoele, this was the right kind of helping. "It's important to learn the difference between helping out and butting in," she says. "Butting in is often a product of the giver's sense of righteousness or insecurity, and it is neither wanted nor appreciated by the receiver. Helping out is a gift that comes from the heart."

And that was what I wanted -- to be driven by my heart, not my ego. My month of restraint had allowed me to make that shift.

The experiment also paid off in other, unexpected ways.

One night after yoga class, I got into a conversation with my teacher and learned that she was single. I was dying to play Cupid, but I held my tongue. The next day, she sent me an e-mail, asking me to keep her in mind for setups. Now that she'd reached out to me, setting her up would mean doing a favor that she'd requested, as opposed to embarking on a self-appointed mission.

I wouldn't feel the usual pressure to prove myself because I had never claimed that I would find her the perfect man in the first place; I had merely agreed to try. I liked the prospect of low-stress helping.

A few weeks after the end of my 30-day trial, my friend of the existential crises called, crying. Love was masochistic, she said. I listened to her list of romantic troubles. I didn't tell her what to do, or even ask leading questions. I didn't fan the flames by mirroring her outrage. I made just enough noise to let her know I was there.

And I realized that in the absence of suggesting, solving, and fixing, my listening skills had greatly improved. After ten minutes, my friend took a deep breath and exhaled. "Thank you," she said. "You made me feel so much better."

Oprah.com: 9 great ways to connect with your world