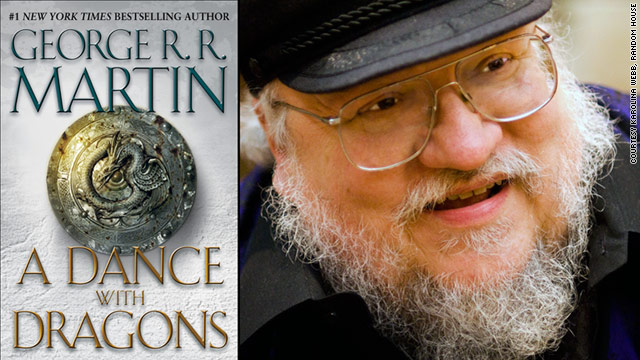 It took George R.R. Martin a lot longer than he thought to write his latest book.
STORY HIGHLIGHTS
RELATED TOPICS

(CNN) -- It may be early July but "winter is coming." In fact, winter finally arrives this week for fans of George R.R. Martin's epic fantasy series "A Song of Ice & Fire." Following a six-year wait, the fifth and latest book, "A Dance with Dragons," hits stores Tuesday.

The series has sold 16 million copies worldwide and been translated into 20 languages. In addition to the books, HBO's adaptation of "A Game of Thrones" won Martin millions of new fans this spring. (HBO is CNN's sister network)

For new readers, the series has been described as "The Sopranos" set in Middle Earth. A group of rival houses jockey for control of the iron throne in the medieval kingdom of Westeros. The books are filled with bloody sword battles, a little magic, a few dragons, numerous cliffhangers and several shocking character deaths.

CNN spoke with the author, George R.R. Martin, at his New Mexico ranch. The following is an edited transcript:

CNN: How does it feel to have this novel finally going out to your readers?

Martin: It was very difficult to finish. It's taken years longer than I thought it would. Back in 2005 when I published "A Feast for Crows," I said infamously that the next book would be out within a year, which was my extremely overoptimistic estimate at the time. "A Dance with Dragons" turned out to be much longer than I was projecting at that time.

It feels exhilarating to have it coming out. A lot of exciting stuff is starting to happen now. Reviews are starting to come out and we're getting initial indications of sales. The book's already back for its sixth printing, even though it's not out yet, which is pretty impressive.

On the other hand, all of this is tempered by my knowledge that although the book is done, the story is not done. There's still two more books to write, so I know that the irony of these situations is I can take six years writing a book and there will be fans who will read it in a day. I will start getting questions -- when is the next one coming out? -- the day after this one is released. The book comes out July 12 and by July 13 people will be asking for the next one, but that's a good problem to have.

CNN: I know some copies of the novel were accidentally sent out early.

Martin: That's what they tell me. One hundred eighty copies were mistakenly shipped, that was from Amazon Germany. I also subsequently learned Amazon Japan also sent out some copies. It's unfortunate, but these things happen. It's difficult to coordinate a giant global release all around the world on one single day.

CNN: You jokingly said on your website, once the guilty party was found, his head would be put on a spike. Has that happened yet?

Martin: Not as far as I know, no. At least, I'd have to go Germany to see. There's no heads on spikes at my house.

CNN: Can you give us any hints about what's in store in your new novel?

Martin: In this book I have 16 points of view, but three of the major characters who were not in "A Feast for Crows" dominate the book, that's Tyrion Lannister, Jon Snow and Daenerys Targaryen. Between the three of them they have half -- almost half -- of the chapters. So the fans of those characters will certainly get their fill.

There are some brand new characters who are introduced and there are some new viewpoint characters ... who've been in the previous books but we've never been inside their heads before. And of course there are dragons, quite a bit about the dragons in this one, so fans will be pleased, I hope.

CNN: "A Game of Thrones" just wrapped up its first season on HBO, are you pleased with the show so far?

Martin: I was very happy with the way it turned out. You always have quibbles, especially if its your baby and they comb his hair a little differently.

I was deeply involved in the adaptation from the beginning. I'm a co-executive producer on the show. I write one episode per season. I did Episode 8 of this first season. I just finished doing my script for the second season, which will be Episode 9. And I have had a voice in all of the casting and so forth. Where changes were made, I know the reasons why.

The fact that I worked for 10 years in Hollywood gives me a little perspective that perhaps some novelists maybe don't have when their work is adapted for television or film.

Overall, I'm thrilled. I think it's an extremely faithful adaptation and it's a terrific television show. We seem to be getting a great response on it, we have the second season coming up and knock wood I hope it will run for many seasons to come.

CNN: How hard is it to map out such a complex and lengthy story?

Martin: It is difficult. There are days where I think I threw too many balls in the air but, for good or ill, I have to keep juggling them. Once in a while I have days where I think my head is going to explode, but it's fun when it works, and (when) it all comes together it works magnificently, but getting it to work is sometimes a challenge. That's one of the things that takes so long, is the sheer complexity of the plot and the number of different threads and characters that I am weaving together here.

CNN: You're about to go on a national book tour, including an appearance at Comic-Con, where you're sure to attract a huge crowd.

Martin: I think so, maybe too huge. I'll find out when I get there. I've done Comic-Con before, I'm an old comic book fan. The first time I attended was way back in the '80s when it was 5,000 people. Now it's 150,000 people and it's an entirely different experience.

Last time I was at Comic-Con was about three years ago and that was a lot of fun and I hope to do that again. The only thing about Comic-Con is the crowds are so big, sometimes it can get a little scary when suddenly you're surrounded by hundreds of people. But we have a panel scheduled, there are some great parties coming up, and I'll be signing all through the weekend. It will be a great time.

Martin: I have part of the next novel already written, the beginning. But of course there's much more to go. I would like to finish it yesterday, but that's not going to happen. I've given up making projections; they just get in me in trouble. Whenever I make a projection and then I blow the deadline I get hundreds of angry e-mails.

So I'm just going to retreat to the, "it will be done when it's done," response to that. I'll obviously do it as quickly as I can, but as with "A Dance with Dragons," my great concern is always to make it as good as possible. I'd rather make it good than deliver it sooner.

CNN: Do you have the ending planned for the conclusion of the series?

Martin: Yes, I know how its going to end. I have the ending broad strokes. I know the fate of the main characters. A lot of the details I will find out in the writing. That's the way I've always worked.

The journey is part of the fun. It is like setting out on a journey: If I were to hit the road to drive down to you there in Atlanta, I would look at a road map, I would know where I'm going, I would know the principal roads I would take to get there, but I might not know where I'd stop for dinner on the first night, or what motel I would stay at, or where I might pick up a hitchhiker or encounter a traffic accident. Those are the things you find out during the journey, or during the writing in the case of a book, but I do know my ultimate destination.