History of the hot pink flamingo 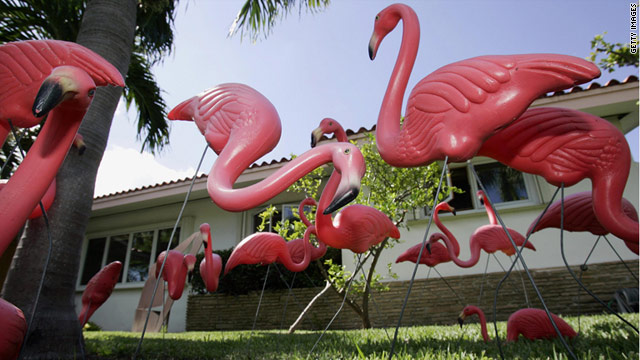 (Mental Floss.com) -- With the season of backyard barbecues upon us, we thought you could use a history lesson on everyone's favorite lawn ornament. From the plastic bird's birth to its modern perch atop the pyramid of campy Americana, here's the quick-and-dirty on the hot pink queen of kitsch.

Birth of a national icon

Perhaps not shockingly, the pink flamingo lawn ornament was invented in the same decade that polyester pants, pink washing machines, vinyl wallpaper and Naugahyde lounge chairs were cool. Flamingo fans worldwide owe their thanks to a man named Don Featherstone a one-time employee of a plastics company called Union Products, who designed the first pink flamingo lawn ornament in 1957.

When they first hit stores, the blushing birds cost $2.76 a pair and were an immediate hit in working-class subdivisions from the Redwood Forest to the Gulfstream waters. This bird was made for you and me.

A (brief) fall from grace

The 1960s were a decade of backlash against conformity, false experience, and all things Parental -- including, evidently, Mom and Dad's lawn décor. Hippies rallied against the plastics industry, cultural critics chastised all things "un-natural," and home and garden magazines pleaded with people to abandon the gnomes, lawn jockeys and flamingos of yesteryear in favor of classier, more natural yard décor.

By 1970, even Sears had stopped selling the pink flamingo, replacing the gaping hole in their garden department with natural-looking fountains and rocks, according to the historian Jennifer Price. Her book, "Flight Maps" (Basic Books, 1999), has a chapter on the plastic flamingo. It's a must-read for flamingo aficionados.

Happily for flamingo fans, the '70s were a carnival of schlock, and by the early part of the decade, the pink flamingo had become so un-cool, it was cool again -- this time as a self-conscious symbol of rebellion, outrageousness and all things Bad Taste. By the time John Waters' movie, Pink Flamingos, hit theaters in 1972, the bird had fully transitioned to the realm of ironic kitsch.

Gay bars used them as mascots, transvestites sported them on earrings and platform pumps, and in 1979, students from the University of Wisconsin-Madison planted 1,008 of the two-legged creatures in the grass in front of the dean's office, earning them -- and the bird -- a place in Wisconsin's State Historical Society.

Pink is the new art

By the 1980s, the pink flamingo had made the ultimate giant leap for mankind: it had, like Andy Warhol's Campbell's Soup cans, become art. In 1987, the governor of Massachusetts proclaimed the plastic bird "an essential contribution to American folk art," Price wrote, and new clubs like the Flamingo Fanciers of America and the International Society for the Preservation of Pink Lawn Flamingos sprang into existence in time to celebrate the bird's thirtieth birthday.

In 1998, the Museum of Contemporary Art in Los Angeles began to sell plastic pink flamingos in its bookstore for $19 a set.

Long live the Queen of Camp

In 2009, in honor of the students' 1979 prank, the Madison, Wisconsin, city council named the plastic pink flamingo the official bird of the city. And the esteemed lawn ornament lives on in Americana infamy, lending its name to bars, restaurants, casinos and hotels from sea to shining sea.

Mental Floss.com: Way more than you want to know about Hello Kitty