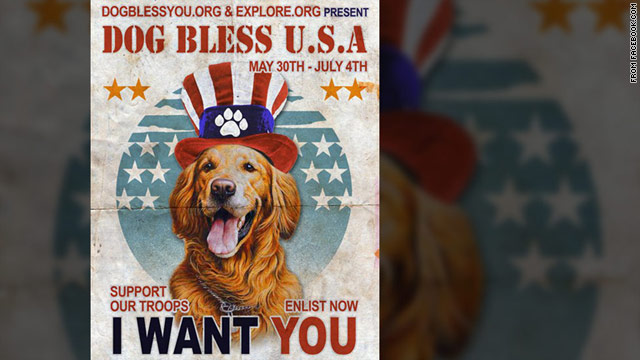 For every 5,000 "likes" on Dog Bless U.S.A's Facebook page, a dog is given to a soldier with PTSD.
STORY HIGHLIGHTS

Washington (CNN) -- It smacks of Fourth of July patriotism -- the poster with a big, panting golden retriever with an Uncle Sam hat and the slogan "Dog Bless America."

But this feel-good blend of friendly mutts and flag-waving also carries a serious message: helping some of the estimated tens of thousand of U.S. military personnel returning from the battlefields of Iraq and Afghanistan but facing a new battle with post-traumatic stress disorder.

"If you talk to the soldiers, they say the real war begins now," says philanthropist Charlie Annenberg Weingarten. "It is the war at home dealing with stress."

The Facebook page of DogBlessYou.org gives anyone a chance to join in. A quick click on the "like" button on the page lets anyone participate and be a part of Weingarten's plan.

For every 5,000 "likes," Weingarten is providing a specially trained service dog to a veteran suffering from PTSD.

"I've seen the power of pets and healing," he said this weekend in a telephone interview. "This allows people to work together and be proud and you see it happen every day on this page," he said.

"It helps the soldiers, and it helps unite people at the same time."

The campaign was set to wrap up on July Fourth.

At the end of last week, 71,000 people had clicked on the "like" button and that meant 14 specially trained service dogs would be linked up to a vet with PTSD.

Weingarten said he relies on outside groups to match the dogs to the individuals in need. "We have found eight or nine organizations that do quality work," he said.

And the recipients, according to testimonials provided by Weingarten and his staff, say there are immediate benefits of having a quiet companion providing selfless love.

"I'm now finding myself smiling again and enjoying more time with my family where I didn't before I had him," said one vet about his dog, Sapper.

"He is truly a blessing to me in helping me get physically fit again by going on runs with me where I would NEVER think about wanting to run or thought I could ever again."