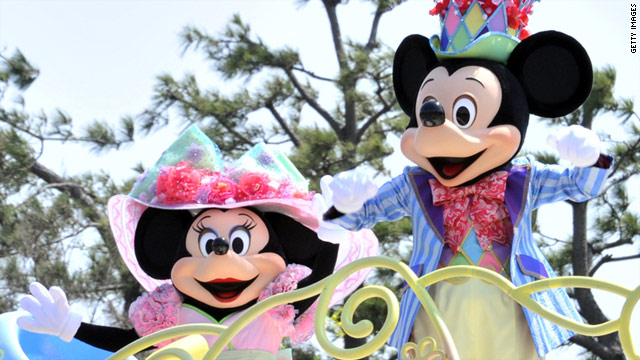 Disneyland has many secrets behind its rides and attractions.
STORY HIGHLIGHTS
RELATED TOPICS

(MentalFloss.com) -- From how to score a cocktail to where to scatter grandma's ashes, this is your ticket to the real Magic Kingdom.

1. There are dead bodies in the Haunted Mansion

The Haunted Mansion ride at Disneyland is one of the scariest places in the park, but not for the reasons you'd expect. In his 1994 book "Mouse Tales," former Disney employee David Koenig tells the story of a tourist group that requested a little extra time on the ride so they could hold a quick memorial for a 7-year-old boy.

Disney gave the family permission, but it turns out, the memorial was only half their plan. When the mourners were spotted sprinkling a powdery substance off their "doom buggies," the Haunted Mansion was quickly shut down until all the remains could be cleaned up.

Amazingly, this wasn't an isolated incident. Stealthy ash scatterings have occurred all over Disneyland. Not everyone tries to skirt the rules, though. Every year, several families ask for permission. According to one Disney spokesperson, the answer is always no.

2. The cats own the night

Each night at Disneyland, after the sunburned families and exhausted cast members have made their way home, the park fills up again -- this time, with hundreds of feral cats. Park officials love the felines because they help control the mouse population. (After all, a park full of cartoon mice is more enticing than a park full of real ones.)

But these cats aren't a new addition to the Disney family. They first showed up at Disneyland shortly after it opened in 1955, and rather than spend time chasing them away, park officials decided to put the cats to work.

Today, there are plenty of benefits to being a Disney-employed mouser. When they're not prowling the grounds, these corporate fat cats spend their days lounging at one of the park's five permanent feeding stations. Of course, Disney also goes to great lengths to manage its feline population. Wranglers at the park work to spay and neuter adult cats, and any time kittens are found, they're put up for adoption.

Just before the final, five-story drop on Splash Mountain, Disney cameras take a snapshot of the riders to catch their facial expressions. The idea is to provide guests with a wholesome keepsake of the experience.

But in the late 1990s, the photographs took a turn for the obscene after exhibitionists started baring their breasts for the camera. Soon, Splash Mountain had gained a reputation as "Flash Mountain," and Web sites featuring the topless photos began cropping up.

In its effort to curb this Tourists Gone Wild phenomenon, Disney began hiring employees to monitor the photos, training them to pull anything offensive before it got displayed on the big screen. Since then, the number of flashers has dwindled.

In fact, the countermeasure was so effective that in May 2009, Disneyland decided that it didn't need employees to monitor the photographs anymore, putting an end to what must have been one of the strangest jobs in the park -- watching for topless riders.

Even though Walt Disney had a mustache himself, he wanted his employees clean-shaven. The idea was to make sure they looked as different from the stereotypical image of a creepy carnival worker as possible.

So, for 43 years, Disney theme park workers were forbidden from growing facial hair. But on a momentous day in March 2000, the company took a giant leap forward and decided to grant the park's male employees the right to sport mustaches. (Beards, goatees, and Chester A. Arthur-style muttonchops were still off limits.)

There wasn't much time for rejoicing, though. When several employees started to grow out their facial hair, management realized that they hated the stubbly look. The rule was quickly amended.

Today, in order to have a mustache at the park, Disney employees must either have them when they're hired or grow them during vacation.

5. Disney World is its own city

Four years after opening Disneyland's doors in 1955, Walt Disney became convinced that it was time to expand his franchise. After scouting several locations, he decided on a plot of land in Orlando, Florida. But there was a major obstacle standing in his way.

The land spilled over into two counties, meaning the task of constructing Disney World would require navigating the bureaucracies of two local governments. To skirt the issue, Disney petitioned the Florida State legislature to let the company govern its own land, essentially making Disney World a separate city.

The request wasn't as novel as it may seem, however. Governments often create special districts for private companies because the arrangement is mutually beneficial.

The company wins by receiving more power over things such as building codes and tax-free bonds, while the local government saves money on providing infrastructure. In the end, the state gets an economy-boosting business that it paid little to help build.

So, that's what Florida did. On May 12, 1967, the Reedy Creek Improvement District was born. Governed by a board of supervisors, the agency has powers typically reserved for city and county governments.

It has the authority to open schools, create its own criminal justice system, and open a nuclear power plant -- although it hasn't chosen to do any of those things yet. The company also holds all of the seats on the board, and it can always count on its residents' support. After all, they're all Disney employees.

Mental Floss: A private tour of the Disney monorail

6. They paint the town green

If you look beyond the fantasy of the Magic Kingdom, Disney hopes you won't see anything at all. The less-than-magical parts of the park, such as fences, garbage bins, and administrative buildings, are all coated in a color known as "Go Away Green" -- a shade that's meant to help things blend in with the landscaping.

According to Disney officials, there's no set formula for the color, but that hasn't stopped die-hard fans from trying to recreate it.

One enthusiast collected paint chips from the park and took them to The Home Depot, where he supposedly found an exact match -- useful knowledge if you're looking to fade into the background at Disneyland.

7. You can shoot hoops inside a mountain

Disneyland's Matterhorn is best known for its bobsled-like roller coaster that twists down the giant peak. But few people outside the park know that deep inside the 147-ft. mountain lurks a basketball court. How did Disneyland become a place where your hoop dreams could come true?

After construction of the Matterhorn was completed in 1959, the roller coaster occupied the bottom two-thirds of the mountain, while the top third remained empty. What to do with the extra space?

Disney employees voted to put in a basketball court. Because a regulation court wouldn't fit inside the mountaintop (sometimes magic can't trump physics), only one goal was installed.

As for the story about the court being installed to skirt building ordinances, that's just an urban legend.

Hidden behind a dull green door in Disneyland's New Orleans Square is one of the park's most exclusive and mysterious attractions: a VIP lounge called Club 33.

Walt Disney built the club as a secret hideaway for dignitaries and celebrities, and he even went to New Orleans to personally pick out the knickknacks for the interior. During the 44 years that Club 33 has been operational, it's served the likes of Johnny Depp, Elton John, and scads of executives from companies such as Boeing, Chevron, and AT&T.

But if you're hoping to join, you'll have to be patient. It takes about 10 years to get off the waiting list, after which you'll have to fork over $10,000 in initiation fees and another $3,500 each year that you're a member.

But it's worth it; Club 33 is the only place at Disneyland where you can ditch the kids for a cocktail.

Mental Floss: How Columbia House made $$ giving away music