The ex factor in three-part harmony 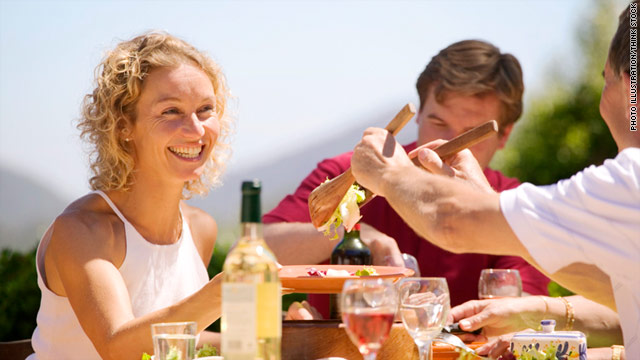 Some exes can not only remain friends, they can befriend the new spouse as well.
STORY HIGHLIGHTS
RELATED TOPICS

(Oprah.com) -- After poetry teacher Michelle Valladares married filmmaker Jose Araujo, they planned to combine adjacent apartments -- but split up and became neighbors instead.

Eleven years later, Valladares and her second husband, carpenter Malcolm Logan, are still next door, and everyone feels at home.

Jose Araujo: Michelle and I had a friend dynamic before we got married, so the jump back to being just friends again felt natural. I think love changes. I think it's normal for people to break up and move on. I've been married four times and I'm still in touch with all my ex-wives.

Oprah.com: Lionel Shriver's take on being friends with an ex (really)

Malcolm Logan: I was married once before, too. Unfortunately, I didn't effect the transition as smoothly as these two did. But it works very well. When Michelle's away, Jose invites me for dinner. We cook, then watch movies or jail shows on TV.

Michelle Valladares: I would never watch those programs!

Jose: And he likes my food.

Malcolm: The food is great!

Michelle: We eat together four or six nights a week.

Malcolm: When we refurbished the kitchen, it was planned with all of us in mind. We could have left more space for cabinets, but we wanted room for three at the table.

Michelle: For weeknight dinners, Jose cooks his Brazilian specialities that we love. Usually all I make is salad.

Michelle: And when Jose is traveling, Malcolm or I take him to the airport. I've also made doctor's appointments for him.

Malcolm: Jose shows me how to use my computer. He helped me apply for Social Security. And recently, when I did something that my wife thought very inappropriate, Jose was the one who saw both sides and wisely counseled us. I have him to thank for our still being married.

Michelle: I understand people who think it's a strange situation. But for me, I just feel lucky because I still have my best friend. I was born in India, Malcolm is from Glasgow, and Jose's folks are in Brazil, so most of our relatives live far away. None of us has children, so for all intents and purposes, we're one another's main family.

Malcolm: If you don't get along with your ex, you lose half your entire mandala, just like that. You're banned from talking to certain people, you have to take sides, and so on. Whereas if you all get along, these things can take a natural course. It makes all the difference.

Oprah.com: How to love more by caring less