The high cost of being a bridesmaid 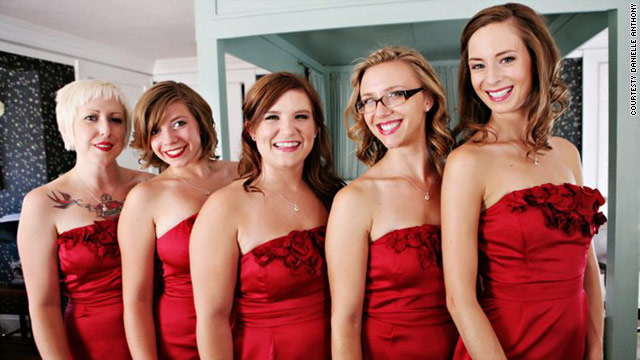 Brianne Bricker (middle) poses with fellow bridesmaids before a wedding she was in last August.
STORY HIGHLIGHTS

(CNN) -- Friends have asked Brianne Bricker to be their bridesmaid so many times, that this summer she finally had to say "no."

It's not that the 24-year-old didn't want to be in her friend's wedding, but after spending more than $5,000 on nine weddings over the last two years, she literally just can't afford one more.

"It's hard, because she's somebody I'd want to have in my wedding," Bricker said, referring to the bride she turned down who is a close college friend.

But Bricker isn't the only bridesmaid to feel the burden of wedding expenses.

After adding up the cost of the dress, accessories, travel expenses, wedding gifts and more, WeddingChannel.com found that it costs about $1,695 to be a bridesmaid. The estimate was based on a 2010 Real Weddings study that surveyed more than 20,000 brides nationwide.

The highest expenses include travel to the wedding, shower and bachelorette party, which each can cost an average of $300.

Many bridesmaids don't realize how quickly the expenses can add up, says Amy Eisinger, associate editor of WeddingChannel.com.

"From the moment they announce the engagement, to the day your friend walks down the aisle, if that's a year and a half, you don't realize that you've spent $1,600," she said.

As the economy struggles out of a slump, the price of weddings -- and the cost of being a bridesmaid -- is starting to rise.

Save the date for 'Bridesmaids'
RELATED TOPICS

"We saw the cost go down during the recession because brides were incredibly cost conscious in what they were asking their friends to do," Eisinger said.

While women want to be in their best friend's wedding, some just can't spend all their savings on the big day. So how do you break it to the bride that you can't be her bridesmaid?

"Be honest up front," says Jodi R.R. Smith, author of "The Etiquette Book," which includes advice on everything from the proper music selection to the wording on wedding invitations.

"If you try to be able to do it, then you end up maxing out your credit cards and going into debt," Smith said. "You should never be going into debt for a friend's wedding."

Smith advises women to turn down bridesmaid offers in person, but never during a wedding-related event like the bridal shower. Instead, grab coffee or find a time to talk outside of work.

Don't "throw a fit" about the expenses, but just tell the truth, Eisinger says.

"You are allowed to say, 'Look, I'm just not going to be able to afford the $200 wedding dress and the trip to Mexico for the bachelorette party and the fact that it's a destination wedding in Key West,' " she said.

Brides who want their friends to walk down the aisle with them will probably offer to pay for expenses like the dress or plane ticket to the wedding, Smith said.

Bridesmaid Christina Barkel was allowed to pick her own dress for a wedding as long as it was royal blue. After months of scouring sale racks and thrift stores, she found the perfect dress for only $40.

Barkel, an AmeriCorps member who earns a small stipend, is paying for only the dress and $450 plane ticket from Michigan to California to be in her friend's wedding in San Diego. Barkel said the bride offered to pay for three of her four nights in a hotel because she understands Barkel can't afford the expense.

Knowing what bridesmaids can and can't afford can be a tricky situation for brides. It's not polite to ask directly, so Smith advises brides to give a spreadsheet with an estimated cost of expenses to their bridesmaids. That way, women can see if their bank accounts can handle the final total.

More "Bridesmaids" coming down the aisles?

But like in the movie "Bridesmaids," unexpected surprises like a bachelorette party in Las Vegas do happen. In these cases, bridesmaids shouldn't be shy to offer alternatives.

"Instead of the bachelorette party in Vegas, [if] you're all East Coast people, have it in Atlantic City," Smith says.

University of Michigan graduate student Katie Okonowski, 23, will be a bridesmaid in her younger sister's wedding next spring. Okonowski said she was thrilled to hear that her sister chose a venue in their hometown of Dearborn, Michigan.

"The fact that it's not out of town, and I don't have to pay for a hotel or travel cost, is really a big cost saver," she said.

Travel is the biggest expense, but bridesmaids shell out an average of $75 for shoes and another $60 for jewelry, according to the Wedding Channel study. Tack on $100 for manicures, hair and makeup.

Celebrity wedding gowns through the decades

Katie Tobin, a 26-year-old student at Loyola University's Law School, is attending nine weddings this summer and is a bridesmaid for two of them. She's having a relative do her hair for her friend's wedding after the previous hair salon bill was twice as much as expected.

Tobin said she feels "a little overwhelmed" with wedding costs because there are so many at once, and she estimates that she'll spend close to $1,300 as a bridesmaid.

While she's using her savings to pay for the dresses and bachelorette parties, she can afford only inexpensive kitchen accessories as wedding gifts.

"I'm still in law school, so luckily, my friends understand I can't do anything too extravagant giftwise," she said.

Bricker, whose friends compare her to the main character in"27 Dresses," says she has had second thoughts about being in some of the weddings in which she wasn't as close to the bride.

"I think you underestimate how much it's going to cost," she said with a knowing laugh. "To be honest, it's probably some of the reason that I'm as poor as I am."

Tips for bridesmaids on a budget

1) The dress: If the bride picks a dress that costs $300, don't feel like you don't have any right to speak up. Do a little research, and see if you can find a similar dress that costs less, Eisinger suggests. Or suggest to the bride that she choose a color and you pick your own dress. That way, you can find something more affordable.

2) Party planning: Hold the bridal shower and bachelorette party on the same weekend so you don't have to fly somewhere two separate weekends.

3) Gifts: Consider group gifting when it comes time to buy the gift for the bridal shower and for the wedding.

4) Lodging: If you're going to stay in a hotel room, find out who the other single girls are in the bridal party or ask the bride if she has any other single friends who will be coming. Then find out if you can split a hotel room with another girl so you're cutting back on hotel costs.

5) Balancing the budget: At the very beginning, come up with a total number of how much you want to spend on the wedding, and then keep a running tab somewhere on your computer or your iPhone of how much you're really spending. If the wedding is spread out over the course of a year and a half, that will help you keep your spending more in check.