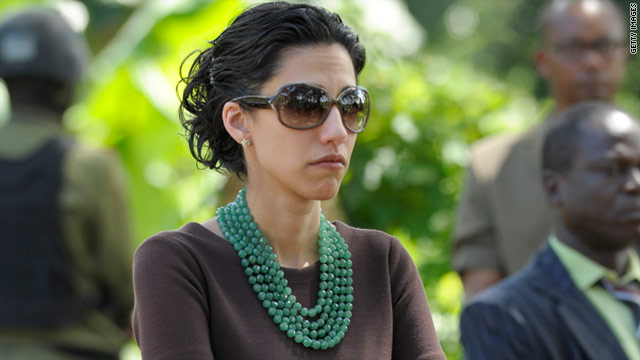 Huma Abedin attends an event in Tanzania while traveling as an aide to Secretary of State Hillary Clinton.
STORY HIGHLIGHTS
RELATED TOPICS

(CNN) -- Americans snicker over the sordid details of Rep. Anthony Weiner's Internet escapades. But they pity his wife, Huma Abedin. They see an accomplished and beautiful woman betrayed by her husband's Twitter posts. And she's pregnant? The details just get worse and worse.

Abedin and other political wives before her have been forced to face the public flogging of their husbands, heightened in this case by the technological evidence that Weiner left behind and by the helpful testimony of his correspondents.

Americans love to debate the role of the wronged political wife. What will Hillary Clinton, Jenny Sanford, or Newt Gingrich's wives (pick one) do? What should they do? Actress Julianna Margulies was nominated for an Emmy for her portrayal of "The Good Wife" on CBS. Will she ever leave her fictional cheating husband?

To which author Laura Munson says, "Stop." Stop calling these women victims. Unless there are threats to her physical safety or financial security, only Abedin decides if she is a victim. (And she's not talking publicly.)

When her own husband, suffering through a midlife crisis, threatened to break up their marriage to end his pain, Munson chose not to play the victim. Instead she planned a summer of joy for herself and her two kids -- and her husband when he wanted to join them. She gave him six months to work through his crisis.

How did she stop herself from pleading with him or simply dumping him just to get it over with? How did she choose a third way?

Munson, author of the memoir "This Is Not the Story You Think It Is," had recently committed to the end of suffering. After years of writing novels that weren't published, the death of her father, and therapy, she decided that she -- not anyone else -- would decide her own happiness. That included her husband.

The same philosophy can apply to not-so-famous women facing infidelity or other crises that destroy their dreams and upend their lives. These crises can be opportunities to find your true calling, says Susan Piver, author of "The Wisdom of a Broken Heart." If you don't remember what makes you happy, imagine figuring it out and starting the seeds of a new life. (Again, this advice doesn't apply if you are facing threats to your safety.)

Wait to make big decisions. If you're not facing financial ruin or the threat of violence, wait at least a few months for the pain and anxiety to settle down. In the fog of pain, people make rash decisions. One of Munson's friends was so unhappy in her life that she decided she had to get out of her marriage. She didn't realize she didn't really want out until she was gone. You need to figure out what you want.

Focus on the present moment. When the crazy thoughts are going through your head about who did what to who, and why didn't you say that perfect comeback line, Piver suggests taking out a piece of paper and writing down five things that you notice are actually happening around you.

They're usually pretty ordinary -- cars driving by, the dog barking, a child playing with dolls. Go a little deeper and notice three things a little more carefully. Write those observations down. That list, part of a group of exercises in her book, isn't ever as crazy as what's in your head. It can have a calming effect.

Create something now. Take charge of your own joy. Munson didn't simply plan a summer of fun for her family. She thought deliberately about what she could do to make herself and her two children happy during their financially strapped summer in their Montana town.

It was often as simple as taking three deep breaths or walking down the block. Sometimes she walked to a beautiful place or visited friends who helped keep the focus on herself, instead of trashing the husband. She turned on the sprinklers and watched her kids get soaked. She bought many tomatoes and canned tomato sauce. "Do something that is positive and nurturing to you," she says.

Give up on the dream. Many people create a storyline or myth for their lives that says they will be powerful when they are pretty or handsome, skinny, married, a parent, or have the "right" job or salary.

"If you're only powerful when it goes a certain way, then what happens when you lose your job?" asks Munson. Do you not matter anymore? Figure out the myths you tell yourself about your definition of success before you can move on.

Look for your truth. Take some quiet time in prayer or meditation to get through other people's voices, and what the culture says about what your life should be like, to your essential truth.

"The advice for anyone going through a trauma is to allow the sorrow and vision for what you thought life should be to dissolve and see what's left," says Piver. "You have all the knowledge you need to solve your problems inside of you."

Choose your own feelings. It's incredibly hard to do, but Munson says it's essential. After all, we only truly believe other people's mean comments about ourselves when we think they're true -- that we're unlovable or fat or nagging or mean-spirited.

"What if someone told you when you were 12 that nobody can make you feel mad, make you cry just by what they say?" she asks. "What if we had really understood that no one could make you feel emotionally anything?" Repeat after me: Those barbs are not necessarily true.

Do not play the victim. You are only a victim in an emotional crisis if you choose to be. "When we get into reaction and escalating the drama, it only hurts us," says Munson. "There is a time and place for anger, but I want to powerfully choose those moments -- I don't want to feel like they're choosing me."